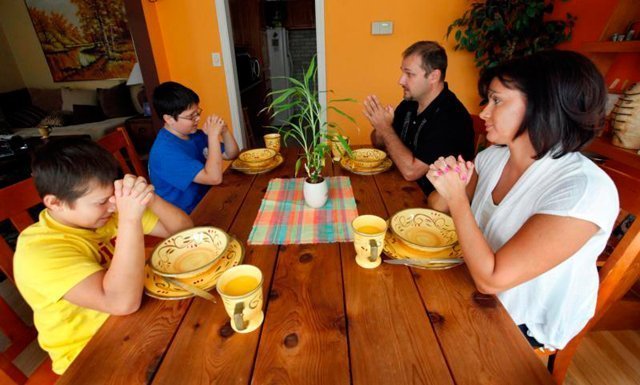 A family prays together before a meal in 2012 at their Chicago home. Charity is an essential sign of Christian faith, one that is learned in family relationships and must spread from there, Pope Francis told leaders and volunteers from Italy's diocesan Catholic charities.
By Cindy Wooden
Catholic News Service
VATICAN CITY (CNS) — Charity is an essential sign of Christian faith, one that is learned in family relationships and must spread from there, Pope Francis told leaders and volunteers from Italy’s diocesan Catholic charities.
"The cradle and the home" of Catholic charity is the family, the pope said April 21 during a meeting with about 700 delegates to a convention of diocesan Caritas operations.
The same "merciful love" that family members give and receive must be extended to "accompany, discern and integrate situations of fragility" found outside the family home, he said.
Catholic charity must be concrete and local — something families are particularly good at, especially when they work together, the pope said. But in responding to the needs of the poor and fragile, attention also should be paid to the root causes of the suffering and to legislation that makes the problems worse or that could be a solution.
Most of all, Pope Francis told the diocesan Caritas workers, their job is to ensure that every single Catholic recognizes he or she has a personal obligation to engage in charity as a witness of Christian faith and a sign that the entire Catholic community is the body of Christ reaching out to those in need.
The pope recognized "global challenges that sow fear, inequality, financial speculation — even on food — environmental degradation and wars."
To face those challenges, he said, people need help learning how to have "respectful and fraternal encounters" with people from other cultures and religions and a "passion for dialogue" and reconciliation when differences arise.
In connection with the national convention, Caritas Italy released a report saying that as of April 15, Catholic parishes and religious institutes have welcomed 22,044 asylum-seeking refugees. The total is about one-fifth of all the asylum-seekers in Italy.
Pope Francis asked the local Caritas workers to continue to be close to the migrants and refugees. While governments need to come up with more "organic policies" for dealing with the influx of those fleeing violence in the Middle East or violence and extreme poverty in Africa, Christians can and should do more to promote the integration of newcomers, helping them learn the language and local customs, he said. But they also should help people recognize that newcomers also are "a richness and a resource" for their host countries.
With help from the Holy Spirit, he said, Catholics increasingly can find better ways "to respond to the Lord, who comes to us in the faces and stories of our most needy sisters and brothers. He stands at the door of our hearts and our communities waiting for someone to respond to his discreet but insistent knocking."
The poor, the pope said, are awaiting "the charity, that is the merciful caress of the Lord through the hand of his church. It is a caress that expresses the tenderness and closeness of the Father."
– – –
Follow Wooden on Twitter: @Cindy_Wooden.
Copyright © 2023 Catholic News Service, Inc. All rights reserved. Linking is encouraged, but republishing or redistributing, including by framing or similar means, without the publisher's prior written permission is prohibited.