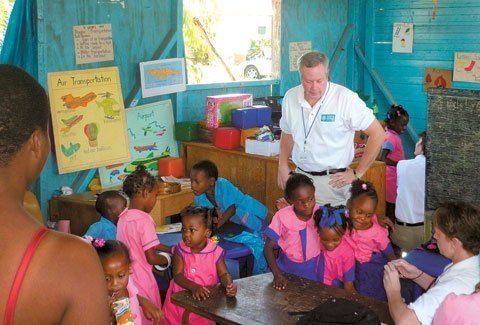 When it rained, the children at High House Basic School in McCooks Pen, Jamaica, would be herded into a corner of their one-room school where the roof didn’t leak.

When the sun beat down on the dilapidated wooden structure, it was stifling inside. The condition of the building was so bad that the school faced closure, which would have left students with nowhere to receive an education.

But then a little group made a big difference in the lives of those children.

A group of friends and 1984 alumni of St. John Fisher College formed the charity Eight 4 World Hope and raised about $45,000 for the school. A new school building that was constructed by the international relief organization Food for the Poor was dedicated this past spring.

"The teacher, you could just see the pride in her face," said Angel Aloma, executive director of Food for the Poor, which operates in 17 countries and has been named the U.S.’s largest international relief and development charity.

He said shutters on the new building keep the sun out but welcome a cool breeze to sweep through the school. Two additional classrooms, a kitchen, a dining area, a sick bay, a watertight roof, a computer lab and working bathrooms are among the facility’s highlights.

Yet the gleaming facility is not the only one that Eight 4 World Hope has built. It is actually the group’s third project — Aloma noted all three have been desperately needed and have been a great success thanks to the energy and enthusiasm of Eight 4 World Hope.

One of the driving forces behind the group is Deacon Kevin Carges, who serves at Our Lady of Peace Parish in Geneva and who is writing a book about his experiences with international relief through Eight 4 World Hope. Deacon Carges said the book tells stories of people he has met, his experiences, and how those people and experiences have affected him.

"I have so many stories and I don’t have the opportunity to share or tell them all," Deacon Carges said of writing the book.

The book tells of Deacon Carges’ call to be a deacon and his eye-opening travels to Jamaica, Haiti and Nicaragua with Food for the Poor and Catholic Relief Services.

"When I went, I thought I knew poverty, but I had no idea how bad it was for others," he remarked.

The book also will talk about how Deacon Carges told his classmates about his travels during a reunion in 2009, and seven signed on with him to address poverty by forming Eight 4 Third World Hope.

The group recently simplified its name to Eight 4 World Hope, Deacon Carges said. Now working on their fourth project, members are raising $11,000 to replace the pit latrine that serves Planters Hall All Age School in St. Catherine, Jamaica. The group has more than half the funds it needs to pay for a new bathroom latrine with a septic system, flush toilets and sinks with running water.

Eight 4 World Hope will have a fundraiser from 6 to 9 p.m. Aug. 1 at Mulconry’s Irish Pub, 17 Liftbridge Lane East, Fairport. The event will feature snacks, a cash bar and drawings. Additional volunteers and donations are needed.

Deacon Carges said a new bathroom facility is desperately needed because the existing latrine was built in 1968 and due to its unsafe conditions, the school will close if the latrine is not replaced.

In addition to this and the High House Basic School project, Eight 4 World Hope has raised funds to build Concord Sacred Heart Early Childhood Institute, a primary school for impoverished children, and a restroom at Bensonton Primary School.

Money for the projects is raised through social fundraisers. The High House project also received a $10,500 grant from the Dorothea Haus Ross Foundation, a private foundation based in Rochester. Other organizations that supported the High House project included Kiwanis and Rotary clubs, said Deacon Carges, who frequently presents Eight 4 World Hope’s work to such groups.

"Anyone who will listen, I will talk to," he said.

Deacon Carges said Eight 4 World Hope already has its fifth project lined up: raising funds for a Catholic school that needs $17,000 of repairs from damage caused by Hurricane Sandy. The project originally was to be the group’s fourth project, until they learned of the plight of the Planters Hall All Age School. Deacon Carges said he is confident the group will raise enough money for both projects.

"I’ve learned to put my trust, my faith in God, and it seems to work out," he noted.

"We know education is the only solution to poverty," he said.

Deacon Carges said seeing the conditions that children learn in each day helps volunteers recognize their own blessings.