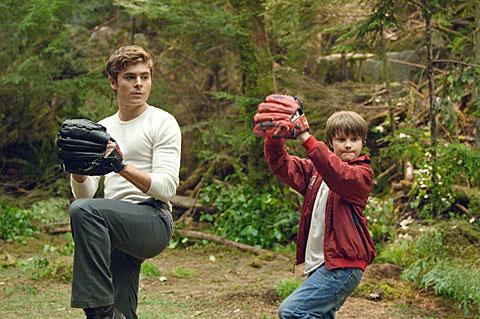 NEW YORK (CNS) — Zac Efron sees dead people — and talks with them, too — in "Charlie St. Cloud" (Universal).
Since ticket sales for this drama will likely be driven more by the well-established heartthrob’s eyes themselves than by anything — supernatural or otherwise – reflected in them, it may seem superfluous to point out that director Burr Steers’ melancholy parable — adapted from Ben Sherwood’s best-selling 2004 novel, "The Death and Life of Charlie St. Cloud" — never quite jells.
Efron plays the titular character, a Pacific Northwest high school senior whose skill at racing sailboats has earned him a college scholarship. Though not as well off as his yachting competitors, Charlie has an emotionally rich family life shared with his hardworking mom Claire (Kim Basinger in a fleeting cameo) and younger brother Sam (Charlie Tahan).

In fact, their existence is so idyllic, with Charlie devotedly mentoring Sam against the backdrop of the region’s natural beauty (skillfully captured by cinematographer Enrique Chediak), that you can’t help but sense doom lurking around the corner. And it’s not long before a brief lapse into irresponsibility on Charlie’s part leads to a car accident that claims Sam and almost kills Charlie as well.

Though miraculously revived by paramedic Florio Ferrente (Ray Liotta) — a man of faith who attributes Charlie’s return from flatline status to the intercession of St. Jude — Charlie is racked with guilt and grief.

Inconsolable, Charlie flees Sam’s burial and runs off to a nearby glade where they used to play catch, only to have Sam suddenly materialize and promise that if Charlie will return to that spot each evening at dusk — a daily appointment they had originally agreed on so Charlie could train Sam for baseball season — Sam will be briefly perceptible to him.

Flash forward five years and Charlie has become the caretaker at the cemetery where Sam’s body rests. His reclusive life revolves around his twilight visits with his lost sibling, though he also converses with childhood chums killed in the United States’ current wars.

But Charlie’s enthrallment with the past is challenged when former high school classmate and fellow sailor Tess Carroll (Amanda Crew) returns to town and swiftly captures his heart, and circumstances eventually force Charlie to choose between his allegiances to the living and the dead.

That the film never fully comes together is mainly the result of the uneasy melding of genres in Craig Pearce and Lewis Colick’s script. Is this meant to be an exercise in eeriness, a psychological study or a salute to romance? Efron, who transcends mere stardom to turn in a sensitive portrayal of his isolated, ethereal character, is certainly not at fault, however.

Catholic viewers will welcome the unusually spiritual and even explicitly religious undertones, manifest not only in Florio’s fervent belief but in Sam’s affirmation of an afterlife of bliss. They will be less pleased with the romanticizing of an encounter during which Charlie and Tess prematurely consummate their potentially life-altering love.

The film contains nongraphic premarital sexual activity, a few instances of sexual humor, at least one use of profanity, a couple of crude terms and six crass remarks. The Catholic News Service classification is A-III — adults. The Motion Picture Association of America rating is PG-13 — parents strongly cautioned. Some material may be inappropriate for children under 13.