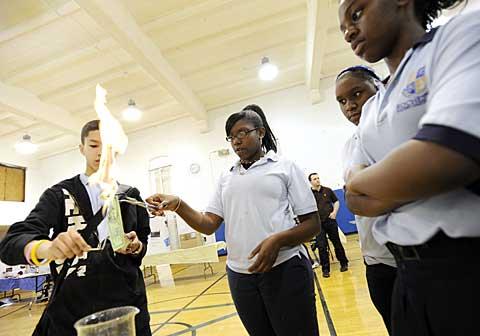 During the end-of-the-year science fair at Rochester Academy Charter School, Daniel Copas carefully demonstrated a homemade blow torch made out of a coffee can, flour, a candle and a straw. Flames started shooting out of the open top of the coffee can as he gently blew into the straw device.

"Flour is extremely combustible," warned the seventh-grader at Rochester Academy, which is located in the former St. Monica School in Rochester.

Prior to enrolling at Rochester Academy in 2009, Copas attended Northstar Christian Academy in Gates.

National statistics show that more and more students are, like Daniel, choosing public charter schools, which are independent, autonomous public schools funded by state aid and that do not charge tuition. Charter schools have fewer state regulations than traditional public schools, and their individual charters may call for such measures as uniforms, extended instruction time or single-sex education.

In contrast, the National Catholic Educational Association has seen a 20-percent drop in Catholic-school enrollment in the past decade, with urban schools hit the hardest. Enrollment at the nation’s Catholic schools was 2,653,038 in 1999-2000, falling to 2,119,341 in 2009-10, according to the NCEA. Between 2000 and 2010, 1,603 Catholic schools were reported closed or consolidated — also nearly a 20-percent drop, according to the NCEA.

That’s why an official from the New York State Catholic Conference, which represents the state’s Catholic bishops in matters of public policy, expressed alarm at New York state’s recent move to increase the number of charter schools allowed to operate in the state. In May, the New York State Legislature increased the cap on the number of charter schools that could be operated in the state from 200 to 460 in a bid to qualify for $700 million in federal Race to the Top education funding. Within the cap, 114 new charters are earmarked for New York City and 146 for the rest of the state.

In New York, some Catholic-school parents have transferred their children to charter schools, spurred in part by the fact that charter schools are tuition-free, said Jim Cultrara, director for education for the Catholic conference.

"There is a problem with stability in the Catholic schools system, and there’s no question that lawmakers should not be surprised when they see more and more Catholic schools raise tuition and face closure because of the increase (in the charter-school cap)," Cultrara said.

When a child attends a religious or private school, Cultrara said, the state pays an average of a few hundred dollars per student to provide state services — which can include transportation and academic intervention and other services — as opposed to $10,000 to $17,000 in services and tuition for students attending public and charter schools.

Nationally, the NCEA estimates that Catholic schools save taxpayers $20.5 billion in public-school tuition. Still, the NCEA notes it has supported charter schools as a way to promote educational choice.

"NCEA supports charter schools in the same manner it supports vouchers, tax credits and other options that enhance the fundamental right of parents to educate their children in a setting of their own choice," NCEA President Karen Ristau said in a September 2009 essay on the subject of charter schools.

Yet Catholic leaders need to be clear that charter schools are not fundamentally Catholic, even if they have been established in the buildings of former Catholic schools, Ristau contended.

"The hallmark of Catholic schools is the ability to integrate faith into the fabric of the school," Ristau said in the essay. "Secular values may be the foundation of the public school’s charter, but they cannot be informed by faith and Catholic teaching."

Cultrara pointed out that some parents of a variety of religious denominations have chosen Catholic schools even when presented with tuition-free options. Brian Gray, a spokesman for the NCEA, noted that non-Catholic enrollment comprises 307,875 students nationally or 14.5 percent of total enrollment in Catholic schools.

In the Rochester Diocese, several charter schools will open in former Catholic schools this fall. University Preparatory Charter School, a high school for boys, will open in the former Raines Park home of Nazareth Hall Elementary School; Nazareth Hall, in turn, has moved to the former Lake Avenue home of Nazareth Academy, which recently merged with Aquinas Institute. True North Genesee Preparatory Charter School will open an elementary school in the former Holy Family School in Rochester, which closed in 2008.

Other areas of the diocese also are beginning to see the establishment of charter schools. A charter high school focused on sustainable living and social justice opened in Ithaca in 2009. Another group also has proposed to open a charter elementary school in the City of Elmira.

"NYSUT believes that charter schools can have an important place in public education — including the vital but as-yet-unrealized mission of partnering with regular public schools in identifying what works and what can be replicated to advance learning for students at risk," the union said in its report, "A $2 Billion Decision: The Case for Reforming New York’s Charter School Law." Legislation raising the charter-school cap eventually won support from the union because it incorporated ethics and enrollment reforms.

The New York Charter School Association noted that results of the state’s 2009 English language arts and mathematics exams at the elementary and middle-school levels showed that four out of five charter schools scored higher in more grade levels than did schools in their respective public districts.

"In the twelve years since the adoption of the New York Charter Schools Act, our members have improved student learning and achievement," observed a press release from the state charter-school association.

Students at an end-of-the-year science fair at Rochester Academy said their charter experiences have been positive.

Roderick Phillips, 13, of Rochester, said he feels he has learned more at Rochester Academy than at the Rochester city school he previously attended.

"I’m OK with the uniforms," Phillips said. "They are not too bad. Sometimes kids will wear stuff that’s inappropriate, so I think uniforms are good."

Family involvement is an important part of the charter-school equation, said Mark Sutherland, director of admissions and public relations for Rochester Academy. Staff members use home visits and other tools to keep families informed and guide them through the college applications process.

The school’s director, Ercan "John" Tozan, recalled a conversation he had with one parent who was amazed at the possibility of a child getting accepted to college — a "kind of miracle" the parent called it.