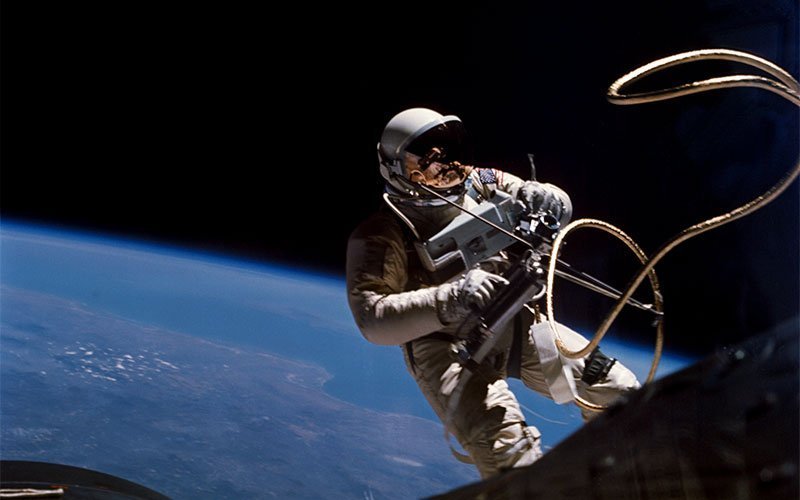 Ed White, the first American to walk in space, on Gemini 4 mission. (Courtesy of the National Aeronautics and Space Administration)

Commemorating the 50th anniversary of the Apollo 11 mission, which safely landed astronauts Neil Armstrong and Buzz Aldrin on the lunar surface July 20,1969, the documentary “Chasing the Moon” chronicles the space race between the Soviet Union and the United States, which ended with that triumph.

The deliberately paced yet often surprisingly revelatory six-hour film premieres as part of PBS’ “American Experience” series Monday, July 8, 9-11 p.m. EDT and continues nightly through Wednesday, July 10, in that time slot. Broadcast times may vary, however, so viewers should consult their local listings.

Thus the film recounts how the Rev. Ralph Abernathy (1926-1990), then president of the prominent civil rights’ organization the Southern Christian Leadership Conference, led a protest at the historic launch on July 16. He declared that “as long as hunger, racism, war and poverty prevail, we as a civilized nation have failed.”

“Chasing the Moon” successfully situates America’s effort to beat the Soviets to the moon within the context of the turbulent political, cultural and social currents roiling the nation during a tumultuous era. But it also emphasizes how Russian ingenuity drew America into the race to begin with by launching Sputnik 1, the world’s first satellite, on Oct. 4, 1957.

Controversial for his ties to Nazi Germany, German engineer Wernher von Braun (1912-1977) became NASA’s principal rocket scientist. As the space program progressed from Mercury to Gemini and finally on to Apollo, von Braun’s past came under increased scrutiny. Yet, given his indispensable role, von Braun was, in the words of former NASA spokesman Ed Bukbee, “kind of untouchable.”

While von Braun remained the mind behind the space program, the astronauts became its most visible ambassadors, and a new breed of heroes to many in the public. Beginning with the earliest astronauts, the so-called Mercury Seven — a group that included John Glenn, the first man to orbit the Earth — they became, historian Roger Launius says, our “alter egos and surrogates in our struggles with the USSR.”

While the courage of the astronauts made possible the space program’s pioneering achievements, President John F. Kennedy also merits praise, in Stone’s view, for challenging the nation to go to the moon — not, as he famously said in a September 1962 speech at Rice University, because such tasks “are easy, but because they are hard.”

Stone’s script includes some mildly off-color language as well as discussions of war, nuclear arms, poverty and racism. Thus, while it’s not suitable for the whole family, “Chasing the Moon” is acceptable for adults and mature adolescents.

Stone makes extensive and excellent use of remarkable, rarely seen archival footage and wonderfully striking still photos to organize his panoramic story, which, to its credit, isn’t limited to NASA and the astronauts. Instead, his film also explores the space program’s impact on Cocoa Beach, Florida, the small coastal community near Cape Kennedy where the missiles were launched.

“Chasing the Moon” also examines the effect these storied events had on the journalists who covered them as well as on the public at large. Commendably, moreover, Stone doesn’t shy away from controversy. The show forcefully recalls, for instance, the shabby treatment by which the first African American astronaut candidate, test pilot Ed Dwight, was denied his shot at space.

From the outset, however, “Chasing the Moon” suffers from the absence of a narrator. Consequently, it will take viewers a while to understand where Stone is headed. He also tends to linger at times, so that at least some in the audience may wish he would pick up the pace.

The documentary, however, will ultimately reward patient viewers with more than its share of emotionally resonant moments. Its poignant evocation of the largely forgotten tragedy that beset Apollo 1 is a good example.

During a launch rehearsal Jan. 27, 1967, Apollo 1’s three crew members, Virgil “Gus” Grissom, Ed White and Roger B. Chaffee — all of them, in journalist George Alexander’s words, “young, vigorous, well-conditioned” — were burned to death because they couldn’t escape a fire in their command module due to a malfunctioning door.   As “Chasing the Moon” thus soberly reminds us, the “incandescent triumph” of July 1969 was won at the cost of unspeakable loss.