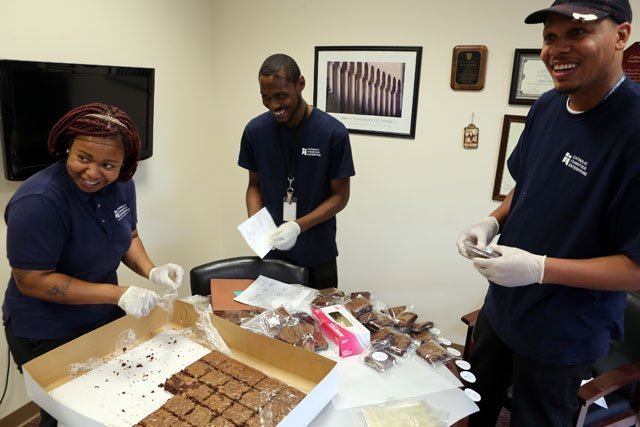 Cooking for 1,900 people, no problem. Cooking for the pope? Now that requires extra care.

Both men are heading the effort of the Washington Archdiocese’s Catholic Charities Enterprises catering service in preparing a meal for 500 guests, including Pope Francis, Sept. 24.

They’ve been at it since Sept. 18 preparing a menu that includes Asian chicken pasta salad with stir fried green beans, carrots and red peppers, a whole wheat roll, lemonade and brownies.

Cooking for the pope is special for the men.

"We’re working with Catholic Charities already, being that we’re feeding kids, we’re feeding families that are underprivileged. At the end of the day, it makes us feel good, but knowing that the pope is actually coming, to take the time out of his schedule is encouraging. It means something," Ellis-Bey told Catholic News Service.

"Knowing it’s for him, it puts you at a different level," he said.

McDonald, 39, said that soon after he learned the program would be cooking for Pope Francis, he began researching the pontiff’s favorite foods on the Internet. The team quickly settled on a pasta salad, but developed two recipes to flavor the chicken.

The meals were tested by Catholic Charities’ staff including Msgr. John Enzler, president and CEO. The Asian option pleased palates best and that became the main course.

"We’re making sure we take care of him," said McDonald, who worked at upscale restaurants and FedEx Field, home of the Washington Redskins, and decided about 18 months ago that he wanted to cook in less ostentatious settings.

Cooking for large groups is why the program exists. Under experienced managers, it was formed to help train people in food services so they can gain employment in other food service venues.

The program’s 12 employees prepare 1,900 meals Monday through Friday each week for senior citizens throughout Washington under a contract with the District of Columbia Office on Aging. They also cook meals for poor and homeless people around the city under the St. Maria’s Meals program, including 350 to 400 people who show up on Wednesday evenings outside of Catholic Charities’ headquarters near Chinatown in downtown Washington.

"We’re very excited to have the opportunity," kitchen leader Eric Curry said. "They could have easily contracted this meal out to anyone, a big catering company. Anybody could have done it. But they chose our in-house catering service. We’re very, very ecstatic to be the ones to cook this meal for the pope and also for the people he will be eating with."

Knowing the pope would be eating their creation, is especially satisfying for the two chefs.

"I’m just looking for that one bite and he just smiles," Ellis-Bey said. "I’ll be thrilled with that."