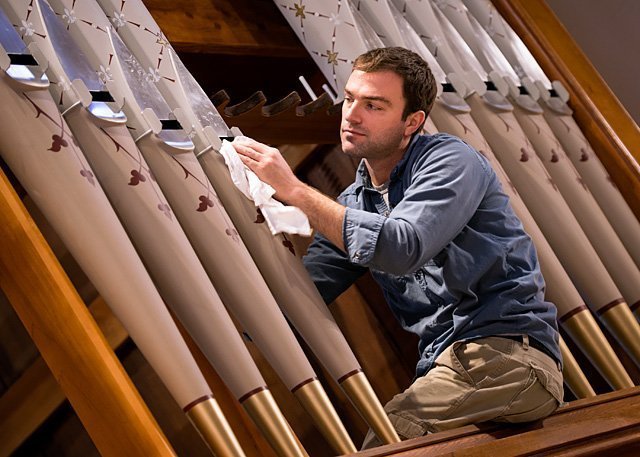 Chad Snyder polishes the front of a facade pipe Feb. 22 while reinstalling the recently refurbished 127-year-old pipe organ at St. Mary Church in Auburn. The organ uses more than 500 pipes to produce its signature sound.

The large pipe organ sits in the balcony high above the pews of St. Mary Church in Auburn, where is has provided the soundtrack to thousands of Masses, weddings and funerals. To many parishioners, however, the organ is more than a musical instrument. It’s an integral part of the parish, according to Aaron James, St. Mary’s interim music director.

Parishioners and others in the Auburn community think so highly of the organ that they raised hundreds of thousands of dollars in order to restore the 127-year-old instrument. And when Bristol, Ontario County-based Parsons Pipe Organ Builders, which began restoring the organ in March 2016, held an open house upon completion of their restoration work, parishioners jumped at the chance to get a sneak peek at the instrument before it was reinstalled, James said.

"We had so many parishioners who wanted to attend (the) open house at the Parsons factory that we rented a full-sized bus and went together. We got to see and hear the finished organ. We’re very excited about the conclusion of the organ project," James said.

The organ has been a part of St. Mary Parish since 1890, when it was built specifically for the Auburn parish by German-American organ-builder Carl Barckhoff for approximately $6,000. Since that time, the organ has been used for more than 70,000 public events, including Masses, as well as countless hours of practice time, according to Joel Morehouse, who served as St. Mary’s music director from 2012-16. 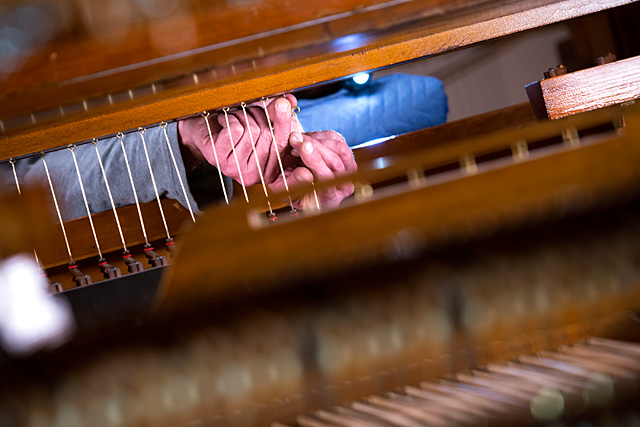 Bernard Talty II connects some of the great pull-down wires to the great square rail while reinstalling the organ at St. Mary Church in Auburn Feb. 22.

"When I started at St. Mary’s, I felt that I had inherited an original, unrestored Rolls Royce. The Barckhoff organ was running reasonably well and had been lovingly maintained over the years, but it was clear that it would need total restoration soon if it were to remain in service," recalled Morehouse, who in 2013 set up the parish’s Organ Legacy Fund to facilitate such a restoration in the future.

The organ had not been neglected but was worn out from constant use, Morehouse said. Although the organ still produced great music, Morehouse found himself spending several hours each week tinkering with the organ in order to keep it functional, and James found himself in a similar situation when he joined the parish, first as organist in 2014 and then interim music director in 2016. After 125 years of continuous use, the organ’s thousands of small moving parts were due for a thorough cleaning and repair to get everything back into alignment, James said.

"In one sense, the restoration of the organ was necessary purely from a maintenance standpoint, to keep the organ in good working condition for the next 125 years of worship," he noted.

"It was clearly the right time to raise support, to exercise Christian stewardship of the gifts of our forebears and preserve them for future generations," Morehouse added.

The organ-restoration project was included in St. Mary’s 2016 capital campaign, which raised $840,000. Approximately half of those funds were used to restore the organ, according to Father Frank Lioi, pastor. In March 2016 Parsons’ staff removed the organ piece by piece over a period of several weeks and spent months restoring each piece before reassembling the organ in February. Parishioners who traveled to Bristol for Parsons’ open house on Feb. 5 were able to see and hear the organ before it was taken apart again in preparation for its trip back to Auburn. In mid-February Parsons’ staff began putting the organ back together, and it will be played publicly for the first time during St. Mary’s Easter Vigil on April 15. It will be blessed and dedicated during a 3 p.m. ceremony on May 21.

"Nobody wanted this legacy to end, and now, at least for the next century, the organ is ready to go," said Morehouse.

That’s good timing, because there seems to be a recent resurgence of interest in organ music among young people, said Morehouse, 33. Music from the 1970s and 1980s is considered "contemporary" church music today, but that’s not the music of the younger generation.

"Most seekers and young people today are a lot more open-minded about tradition and history than their parents," Morehouse said, noting that the beauty of the church’s musical tradition was partly responsible for his own conversion to Catholicism in 2004.

The organ’s enormous range of sounds makes it an effective liturgical instrument because it brings out the different characters and emotions associated with the different seasons of the liturgical year, noted James, 30.

"Pope Emeritus Benedict XVI, a great lover of music, commented that this variety of sound in a pipe organ is a good analogy for the communion of the church," James said. "Just as an organ consists of many pipes with different sounds that nevertheless create a harmonious whole, the church consists of many people with different gifts and charisms, which are ultimately united through faith in the praise of God."