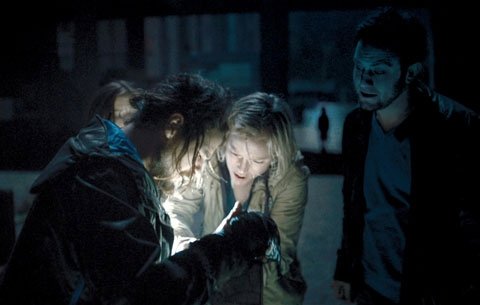 NEW YORK (CNS) — Like the real-life practice of extreme tourism from which it takes its premise, the grueling horror exercise "Chernobyl Diaries" (Warner Bros.) is not for everyone.

In fact, gruesome scenes of the wounded and the dead, together with a barrage of foul language from the jittery and the doomed, make this flesh-creeper morally unsuitable for most.

Despite Chris’ forebodings, Paul convinces his houseguests to join him on an exotic outing to the abandoned city of Pripyat under the direction of local tour guide, and extreme tourism specialist, Uri (Dimitri Diatchenko). Once home to many of the workers at the Chernobyl nuclear complex, Pripyat had to be instantly evacuated in the wake of the 1986 disaster at the neighboring plant, and has remained ostensibly deserted ever since.

At first, all seems to go well. Joined by two of Uri’s other clients, backpacking couple Michael (Nathan Phillips) and Zoe (Ingrid Bolso Berdal), Paul and his visitors wander the creepy precincts and get a few startling, yet relatively safe, turns.

But when the time comes to depart, Uri finds that the wiring in his van has been mysteriously sabotaged. This is somewhat unfortunate, as it leaves the dodgy docent, as well as those under his care, stranded amid high radiation levels, predatory wild animals and strange, indistinct noises. Oh, and it’s getting dark.

Things go from bad to worse when the embattled ensemble have their first violent brush with an even more sinister source of danger, the nature of which they only gradually come to understand.

In his feature debut, director Brad Parker conjures up the occasional jolt. But unlikely plot elements and largely unsympathetic — and shallow — characters work against audience involvement.

"Chernobyl Diaries" is linked to the "Paranormal Activity" franchise by the presence of Oren Peli, who wrote all three of the films in that series and directed the first of them as well.

Given his participation in this project, for which he penned the script in collaboration with Carey and Shane Van Dyke, its high levels of bloodletting — very much in contrast to the restraint which has consistently characterized the "Paranormal Activity" outings — comes as a disappointing surprise.

Along with the vocabulary issues aforesaid, such messy mayhem marks "Chernobyl Diaries," like the venue in which it unfolds, a no-go area for all but a few.