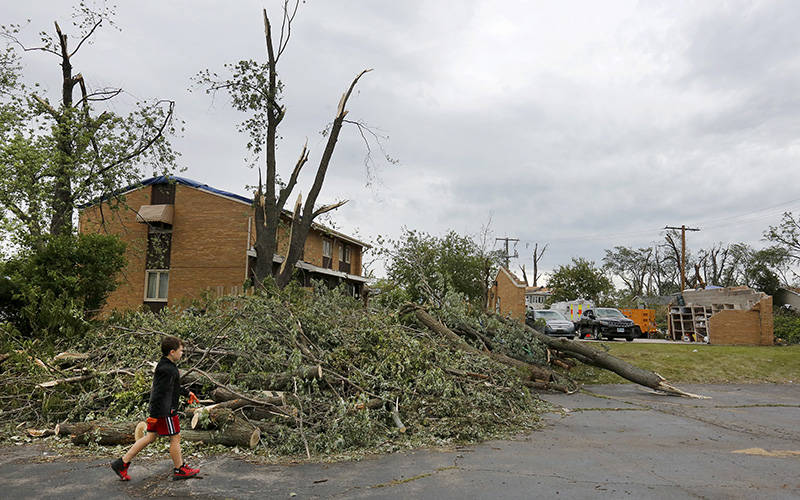 A boy in Woodridge, Ill., walks past damage June 23, 2021, that was left by a category EF-3 tornado. The twister touched down near the parish rectory at St. Scholastica Church in Woodbridge and demolished the garage June 20. A category EF-3 tornado can bring wind gusts of up to 165 mph. (CNS photo by Karen Callaway/Chicago Catholic)

WOODRIDGE, Ill. (CNS) — In the aftermath of a category EF-3 tornado that ripped through Woodridge and Naperville, Illinois, June 19, Chicago-area residents are offering assistance to those whose homes and businesses were damaged by the storms.

One such group is Hope’s On The Way, which is run by deacons from the Archdiocese of Chicago. The ministry provides 5-gallon plastic buckets filled with supplies to those suffering the aftermath of storms, flooding and other natural disasters.

On the morning of June 23, members of Hope’s On The Way delivered buckets to Christ the Servant Catholic Church in Woodridge, which, like Naperville, is in the Diocese of Joliet. The church, which has been receiving donations since the day after the storm, planned to distribute the buckets to those in the community who need them.

The staff of St. Scholastica Church in Woodridge saw the Gospel in action on the morning of June 20, when over 200 people came out to begin cleaning up the parish grounds, as well as the rectory, which was destroyed by the tornado.

The high winds tore off part of the rectory’s roof, knocking down the front entryway, and blew out windows. The garage was left with one-and-a-half brick walls still standing. Roofing shingles were ripped from both the church and school. Age-old trees were uprooted around the parish campus and the outdoor Mary statue was toppled.

“Without calls, without anything, people started to come,” said Sue Gosewehr, communications coordinator for the parish. “Parishioners, Boy Scouts, the Knights of Columbus, school families, parish families and people from the community started coming Monday morning to start the cleanup.”

People have been dropping off donations of food and water at the parish administration center, which did not lose power because it is on a different grid than other church buildings.

After the storm passed through, Raszeja opened the center to first responders and people needing shelter, and has kept the center open 24 hours a day. Neighbors and workers come in to charge their phones, use the bathroom and grab some food.

“Our doors have been open nonstop since the storm,” Gosewehr told the Chicago Catholic, newspaper of the Chicago Archdiocese.

The outpouring of love and care from the community has been evident the whole time, she said.

“It’s been nonstop with donations,” she said.

Parish volunteers have been organizing the donations of food and beverages and distributing them to those who have been affected by the storms.

“One of the families who came in to use our electricity — they came in a couple of times — they registered as parishioners. ‘They said this is such a welcoming community. We want to be a part of this community,’” Gosewehr said. “It was very touching.”

Tammy Kozar, a teacher at St. Scholastica School and a school parent, said she also has seen the Gospel in action.

“We had a whole bunch of teachers who came out here on day one helping because this is our family,” Kozar said, who was cleaning up debris with her family outside the rectory June 23.

“We’ve had a majority of the teachers come. We’ve had families come in and out just helping out,” Kozar said. “What I keep focusing on is something so devastating came out to be an amazing thing because, for example, you have people come from Chicago saying, ‘We heard that this happened to you. What can we do?’ It’s just witness to what our plan is (to live the Gospel).”

In an email statement, Bishop Ronald A. Hicks of Joliet said: “If we truly see ourselves as a family of God, then when one person suffers from a natural disaster, we all suffer. My heart and prayers go out to all those affected by this tornado.”