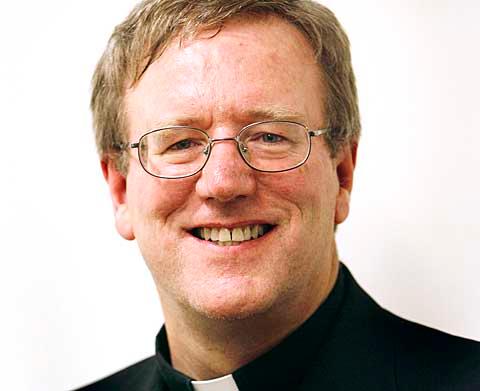 CHICAGO — A Chicago archdiocesan priest who teaches systematic theology and is a well-known homilist with a popular evangelization website and radio program has launched a weekly national program on a commercial TV network.

On Oct. 3, “Word on Fire With Father Barron” premiered on WGN America and will air Sundays at 8:30 a.m. Central time.

The Chicago-based network, which offers its national programming across North America, is carried on various cable outlets.

An announcement on Father Robert Barron’s website, www.wordonfire.org, said his show will be “a groundbreaking broadcast” because he “will become the first priest since Archbishop Fulton Sheen in the 1950s to have a regular, national program on a commercial television network.” The archbishop’s show was called “Life Is Worth Living.”

Father Barron, a professor at the University of St. Mary of the Lake/Mundelein Seminary since 1992, has a global media ministry called “Word on Fire,” which aims “to educate and engage the culture.”

The priest said he has the same mission for his TV show, which is being funded by private donations, according to the announcement.

“Now is the time to reach out to Catholics and others who are searching for meaning in their lives or who have left the church because they are disillusioned,” he said in a statement. “In each episode, our mission will be to encourage believers and bring the transformative power of the Gospel to the culture.”

He holds the Francis Cardinal George chair of faith and culture at Mundelein. Ordained a priest in Chicago in 1986, he has published numerous books, essays and DVDs.

Father Barron also lectures and leads retreats and workshops around the world. In downtown Chicago, he holds a series of missions for business, civic and cultural leaders.

His homilies can be heard Thursday mornings on Relevant Radio. He is a regular commentator on the Paulists’ “Busted Halo Show” on the Sirius satellite radio network based in New York. He appears on the Eternal Word Television Network, and videos of his commentaries can be found regularly on YouTube.

Father Barron holds a master’s degree in philosophy from The Catholic University of America in Washington and a doctorate in sacred theology from the Institut Catholique de Paris.

For the past two years, he has been producing a 10-part documentary series called “Catholicism,” traveling to 16 countries to tell the story of the church. The release is set for next year, but Father Barron said he will preview some highlights of the series in his weekly broadcasts.

“The faith of the church is our strength,” said the priest. “Our program will strive to show viewers the richness of the Catholic faith and how it is a treasure to be shared now and with future generations. The faith imbues our life with meaning and imparts to all a renewed sense of purpose.”