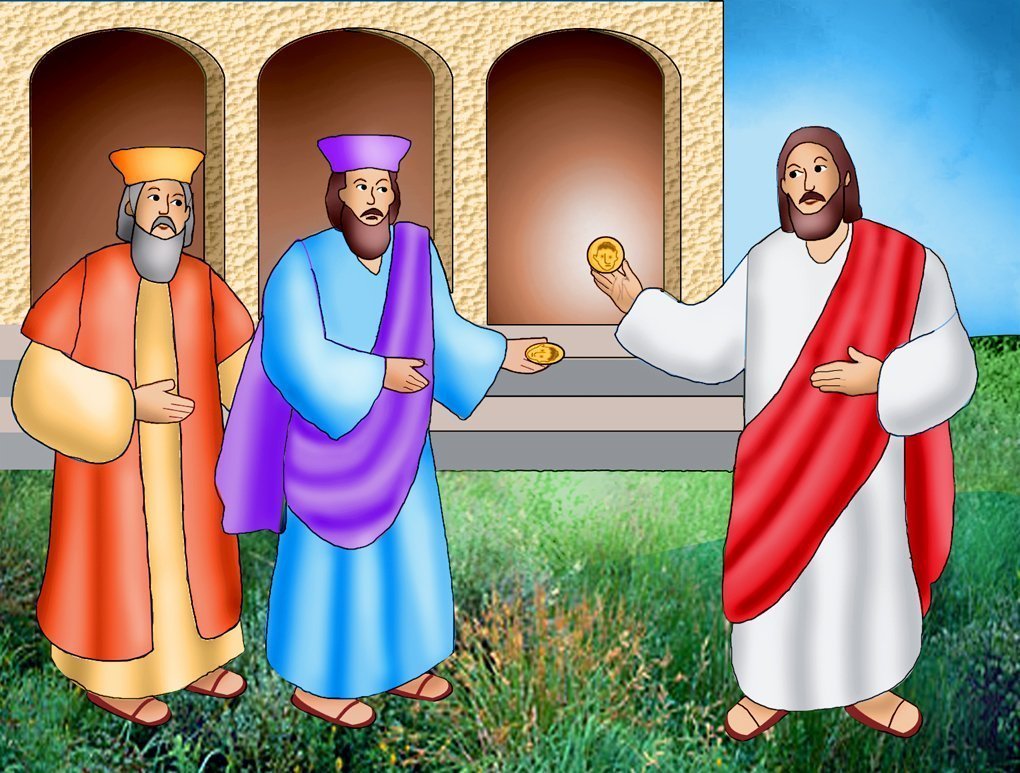 Jesus was teaching near the temple when some of the scribes, chief priests and elders approached him. “Tell us,” one of them said, “by what authority are you doing these things? Or who is the one who gave you this authority?” Jesus knew his questioners were trying to trick him into giving an answer they could use against him so he used wisdom when he replied. “I shall ask you a question. Tell me, was John’s baptism of heavenly or of human origin?” The men were afraid of Jesus’ question. If they said John’s baptism was of heavenly origin, Jesus would ask why they did not believe him. If they said it was of human origin, the people, who loved John, would be very angry. So they told Jesus they could not tell from where John’s baptism came. And Jesus said to them, “Neither shall I tell you by what authority I do these things.”

Later, Jesus was challenged by some of the chief priests and scribes. For a second time they tried to use trickery against Jesus. One of them asked Jesus, “Is it lawful for us to pay tribute to Caesar or not?”

Jesus saw through the trap the man was trying to set for Jesus, so he said, “Show me a denarius; whose image and name does it bear?”

Sadducees also were there, and they did not believe in the resurrection. They asked Jesus about one of the laws written down by Moses about a man who died without leaving any children. His widow remarried several times, but died childless. “Now at the resurrection whose wife will that woman be?” they asked Jesus.

“The children of this age marry and remarry,” Jesus told them, “but those who are deemed worthy to attain to the coming age and to the resurrection of the dead neither marry nor are given in marriage. … That the dead will rise even Moses made known in the passage about the bush, when he called ‘Lord’ the God of Abraham, the God of Isaac, and the God of Jacob; and he is not the God of the dead, but of the living, for to him all are alive.” “Teacher, you have answered well,” the Sadducees said.

Q&A
1. Who were some of the people who tried to trick Jesus?
2. What did Jesus say about Caesar and God?

The first Sunday of Advent is only a month away. How much do we really know about the Christmas season and its history?

Dec. 25 is most likely not the actual birth date of Jesus, but it is the date that has been celebrated by tradition over many years.

Most scholars believe that Jesus was probably born between 7 and 5 BC, based on studies of historical documents and astrological charts.

The earliest known calendar reference to a “Christ Mass” is from the year 336.

The use of Christmas trees as part of the celebration is said to have started in eighth-century Germany. Legend has it that around 725 St. Boniface, in talking to pagans in Germany, used an evergreen tree to symbolize the eternal life Christ promised us.

Leo the Great (d. 461) was a scholar from Italy who worked as a deacon under St. Celestine I, and who later became a priest. In addition to his skills as a religious leader, he was called upon because he was able to bring enemies together to talk rather than to fight.

When Pope Sixtus III died, Leo was named as his successor in the year 440. Nearly 100 of his papal speeches have been preserved. He also wrote a letter about the nature of Christ, in order to clarify the church’s belief. This letter is now called “The Tome of St. Leo.”

After brutal raids by barbarians, Leo worked to rebuild his damaged country and to minister to people who had been injured or made homeless. He died a man loved by his people and respected even by many of his opponents. We honor him on Nov. 10.