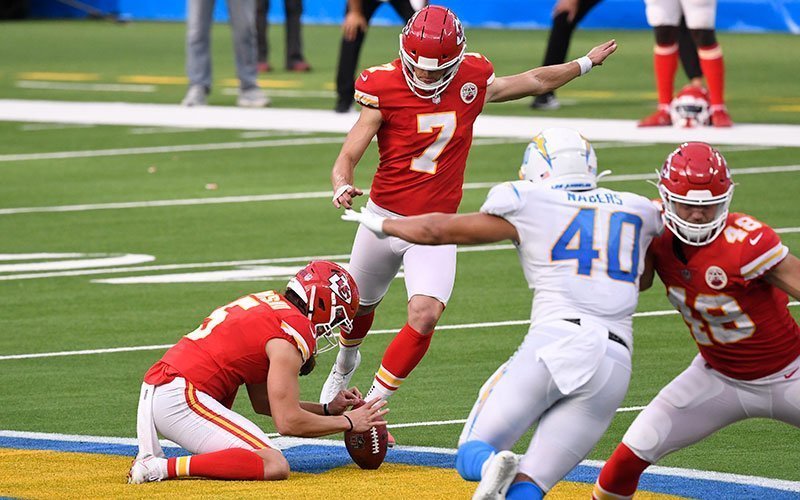 Harrison Butker’s impact on the football field is tremendous. As the kicker for the Kansas City Chiefs, he was a vital component of the team’s victory in Super Bowl LIV.

But the morning after the game, as he told the attendees at the Knights of Columbus 55th annual College Councils Conference, he still had to take out the garbage. This simple act was a humbling reminder to him while on top of the football world.

“Outside of the bright lights of the stadium, with the fans and the notoriety that come with being an NFL player, the greatest impact that I will make with my time on this earth is remaining dedicated to my primary vocation — helping my family get to heaven,” he said.

Butker, a member of the Knights of Columbus who joined while a student-athlete at Georgia Tech, challenged College Knights to make an impact on their communities and college campuses by “showing by our actions what a Christ-centered life looks like put into practice.”

The Sept. 11-12 conference, which was held virtually, was convened under the theme “Brothers in the Breach,” on the heels of a Knights-produced video series calling Catholic men to live a life of heroic virtue similar to that of the fraternal order’s founder, Father Michael J. McGivney, who will be beatified Oct. 31. Other speakers included Supreme Knight Carl Anderson and Deputy Supreme Knight Patrick Kelly.

Butker, 25, told the attendees that the “world needs Knights” and to rise above the “unfriendly” and “hostile” cancel culture spreading across college campuses. He added that “thankfully, adherence to popular opinion is not a prerequisite for heaven.”

“Giving into societal pressure is the easier road to travel for sure, but that doesn’t bring us to the side of the countless heroic saints who have shown us the better way,” he said. “It is up to you to speak up, do more, be more. Be the light in the ever-darkening world.”

He also opened up about his own faith journey. While he was a student at Georgia Tech, a friend pointed him toward the love of Christ and encouraged him to be more active in the faith.

Inspired by his witness, Butker reoriented his life to be centered on God. That newfound relationship with Christ helped him not only in his profession, but also motivated him to act more upon his faith, such as altar-serving at the Traditional Latin Mass.

Butker noted that faith isn’t something only “reserved in private and on Sundays.” He referred to our lives on earth as a battle that can only be won by a “complete surrender” to God’s love.

“Now is the time for you to take up your task, as men of the church to fight this battle for our nation, to bring Christ back to our daily lives,” Butker said. “Men need to play active roles within our church, and I believe being a Knight is a great start. … Your priests need to hear from you. They need to see you. Other men need to see you.”