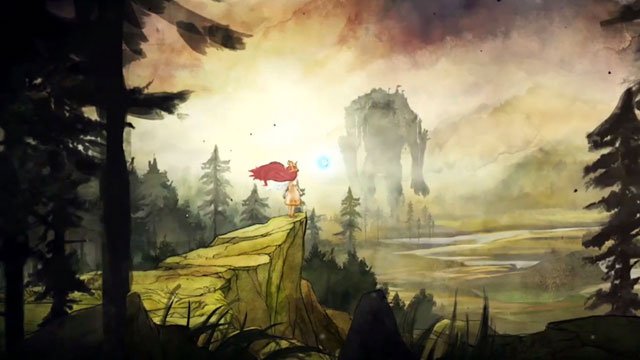 This is an image from the video game "Child of Light." The Catholic News Service classification is A-I -- general patronage. The Entertainment Software Rating Board rating is E -- everyone.

NEW YORK (CNS) — It’s a frustrating experience familiar to every player: the moment when your progress through a video game becomes blocked, leaving you stuck in a kind of limbo. You can’t unlock the puzzle that would allow you to move on to the next level — but you also can’t go back.

With "Child of Light" (Ubisoft) however, even being stumped can turn out to be a pleasure. The game features such gorgeous artwork that, should it stymie you, you can reasonably choose to treat the impasse as an opportunity to pause and savor the lush scenery its background consistently offers.

In place of the glossy digital look of most video games (and action films), "Child of Light" boasts a painterly aesthetic full of detail and thrilling — though understated — perspectives.

Inspired by fairy tales and 19th-century children’s books, "Child of Light" relies on a timeless plot: a youngster’s journey to an alternate reality that serves as an allegory for our own world. Other recognizable precedents for the story include Greek myths, C.S. Lewis’ Christian-themed Narnia series and J.R.R. Tolkien’s Catholicism-tinged narratives of Middle-Earth.

The year is 1895. A young girl named Aurora lives in a castle in Austria. Her father, a duke, has remarried after the death of Aurora’s mother. On Good Friday, much to the alarm and distress of those around her, Aurora falls into a slumber so deep that it resembles death.

Still very much alive, however, the sleeping lass finds herself transported to a place of shady forests and magical creatures, the mythical land of Lemuria. Though enchanting in many respects, Lemuria is also a damaged world: the villainous Queen of Dark has stolen most of its light.

The task of the gamer controlling Aurora is to remedy this situation by capturing illumination from the sun, moon and stars, thereby restoring Lemuria to its proper state and enabling Aurora’s return home. The parallel between Aurora’s quest and the mission of Christ, initially signaled by the timing of the former’s visit to Lemuria, remains unmistakable.

Along the way to achieving Aurora’s goal, players face many challenges — from intricate puzzles to simulations of physical combat.

While the latter element of the gameplay entails swordfights, "Child of Light" contains no bloodshed. Defeated evildoers are simply zapped away, not mangled or mutilated as they might be in other games. Together with the absence of any sexual content, such sanitized conflict makes this title suitable for virtually all ages.

Played for review on PC and Sony’s portable Vita system, "Child of Light" is available on all platforms except Nintendo.

The game contains some highly stylized violence. The Catholic News Service classification is A-I — general patronage. The Entertainment Software Rating Board rating is E — everyone.