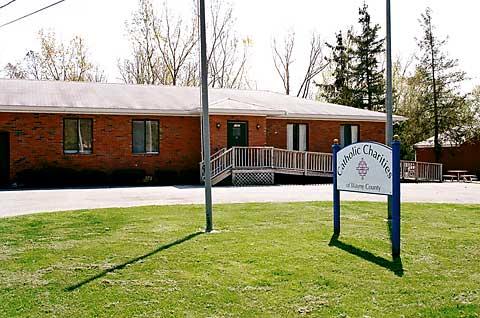 Catholic Charities of Wayne County was established in 2004.

"The social and emotional needs of children in our community continue to grow," said Robert R. Ike, superintendent of the Palmyra-Macedon Central School District. The Early Intervention Program (EIP) — offered by Catholic Charities of Wayne County — is designed to assist children under the age of 12 who are experiencing difficulty functioning. This program is one of the agency’s most important and effective services.

"Pal-Mac has been fortunate to reap the benefits of the services provided by Catholic Charities for many years. The outreach and services provided to our UPK (universal prekindergarten) students have been critical to the families served," Ike said.

Children have an increased chance of having impaired functioning skills due to such risk factors as abuse in their households, poverty, low parental educational levels, parental drug usage and being raised in single-parent households. Children from relatively healthy families also can display behaviors that justify early intervention.

In general, these children are unable to regulate their emotions; they can either shut down emotionally or overreact to various situations. Children in need of EIP services usually seem isolated, depressed and overanxious. EIP counselors work with these children, their families, school counselors and other local resources to promote healthy social, emotional, behavioral and academic development.

EIP is based on the principle that earlier intervention for children who display these behaviors will lead to greater likelihood of success in rectifying the behaviors. If these problems are not addressed in a child’s early years they increase in intensity during adolescence, leading to more severe problems for the child, the family and society.

Child-centered play therapy is one important resource in helping these children cope with factors placing them at risk. Since play is a child’s normal way of self-expression, this therapy allows the child to communicate and resolve the difficulties they are experiencing.

Counselors sometimes introduce filial play therapy, in which parents are trained to use child-centered play therapy effectively at home. Parents also are introduced to other therapies and referred to other resources such as parent-education programs.

The EIP program benefits more than 300 children and family members every year. In addition to the Pal-Mac school district, EIP services are available in the Lyons, North Rose-Wolcott, and Red Creek districts and at St. Michael School in Newark.

"The counseling services provided through Catholic Charities continue to be effective in supporting our children and families. Without these services several of our students and their families would likely be unable to receive the intensive help they need in order to address their mental-health problems. The Early Intervention Program helps to prevent out-of-home placements while also helping our students’ progress academically, socially and behaviorally," said Jill Virts, school psychologist for Red Creek Central School District.

Every year, 90 percent of the children in the EIP program exhibit significantly improved behavior. One mother noted that her son was making friends for the first time and really getting along with other children. The son had difficulty dealing with his mother’s cancer, and she gave all the credit to the EIP program for his turnaround. She said, "I attribute all of his progress to this program and its help to the family. I don’t know what we would have done without it."