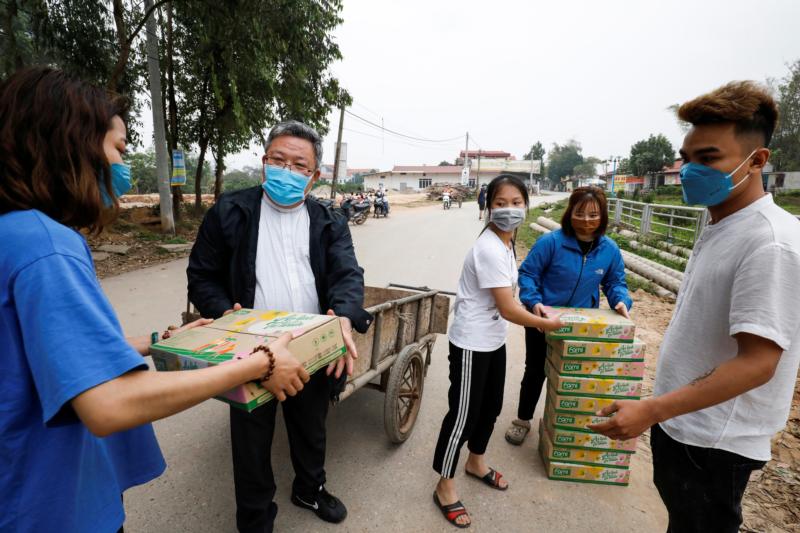 Father Francis Xavier Nguyen Duc Dai distributes food to local people while wearing a protective mask in Son Loi, Vietnam, Feb. 25, 2020. The area has been quarantined due to the coronavirus. (CNS photo by Kham/Reuters)

YANGON, Myanmar (CNS) — The Chinese government has temporarily closed all of the country’s places of worship in an effort to contain the COVID-19 respiratory coronavirus that has now killed almost 3,000 people, with more than 80,000 around the world verified with infections.

The government also banned all group religious activities, including at the YMCA. But it also praised religious groups of all faiths for raising money in an effort to help people afflicted by the disease, people trapped in quarantine zones as well as health workers and others on the front line of the fight to contain the epidemic.

Government religious regulators said religious groups should adhere to the health of staff, believers and members in the first place, and make sure they have deployed and purchased disinfectants, hand sanitizers, masks, etc. They have ordered testing and disinfection of public areas.

The disease is now thought even more highly infectious than first thought by medical researchers, and it continues to spread throughout Asia, North America and in Europe. Most of the fatalities and infections remain in mainland China, which reported 508 new cases and 71 new deaths Feb 25, bringing totals in the People’s Republic to more than 77,000 cases and more than 2,660 deaths.

“The situation is very grave,” South Korean President Moon Jae-in, a Catholic, said on a visit to the hard hit city of Daegu. “We will achieve a victory in the fight against this virus.”

Cardinal Charles Maung Bo of Yangon, president of the Federation of Asian Bishops’ Conferences, posted a message on Facebook: “This is the time of universal brotherhood of humanity. It is not a time for mutual blame. Let us remember every brother and sister affected in our prayers every day. Pope Francis has appealed for prayer support. He said, ‘Let us all pray for our brothers and sisters who are distressed by the cruel coronavirus epidemic.'”

The World Health Organization noted Feb. 24 that the coronavirus was an epidemic, not a pandemic — an epidemic that has spread worldwide. Yet that day, worldwide stocks plunged amid global fears.

By noon Feb. 25, Italy confirmed 283 cases of the virus, with seven deaths. The majority of cases were in the northern Italian region of Lombardy, whose capital is Milan. The Veneto region, whose capital is Venice, had more than two dozen cases.

Venice canceled its pre-Lenten “Carnevale.” The Archdiocese of Milan also issued a notice Feb. 23 suspending all public celebrations of the Mass until further notice in compliance with Italian Ministry of Health precautions.

After Israel reported that 18 people from a recent South Korean tour group were infected with COVID-19, a spokesman for the Latin Patriarchate of Jerusalem said officials were concerned how the diagnosis would affect Lenten and Easter pilgrimages.

Israel has banned all flights from South Korea and Japan and said it would arrange a special flight for the approximately 1,000 South Koreans currently in Israel who were waiting to return home.

In Vietnam, Father Joseph Hoang Trong Huu, 35, began providing pastoral and health services in Son Loi commune in Vinh Phuc province Feb. 16. The government sealed off the 10,600-member commune for 20 days Feb. 13 due to fears over the spread of the COVID-19 strain.

Ucanews.com reported the priest said health workers offer health instructions, supplies and basic information on the virus to families. He said although everyone fears the coronavirus, people still visit churches and pray.

“I plan to place the Eucharist on church altars so that people can adore and seek divine hope,” he said.

Father Huu called on people from other places to pray for, give encouragement and offer medical supplies to health workers, patients and people suffering from physical and mental pain. He said people should sympathize, share and journey with quarantined people rather than keeping away from them.

In mid-February, church officials in Hong Kong announced the suspension of public Masses on Sundays and weekdays for two weeks, including Ash Wednesday, Feb. 26.

The Catholic Bishops’ Conference of the Philippines updated its liturgical guidelines Feb. 20. The bishops asked Catholics not to kiss or touch the cross when they venerate it on Good Friday, April 10. Instead, they should “genuflect or make a profound bow” before the cross during the veneration of the cross

Some Catholic priests in Africa called on their government to evacuate students trapped in Wuhan, where the coronavirus originated in China. But some governments, like Kenya, said the students are better off remaining where they are. Earlier in February, Nigeria said it would not evacuate its nationals or restrict Chinese entry.

An estimated 4,600 students from African countries are residing in Hubei province, whose capital is Wuhan.

Contributing to this story were Judith Sudilovsky in Jerusalem, Fredrick Nzwili in Nairobi and Cindy Wooden and Ryan Harms in Vatican City.