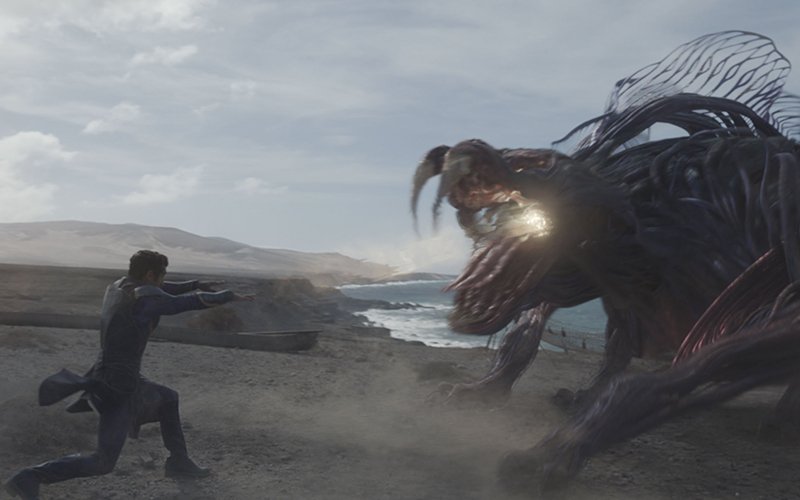 Kumail Nanjiani stars in a scene from the movie "Eternals." The Catholic News Service classification is A-III -- adults. The Motion Picture Association of America rating is PG-13 -- parents strongly cautioned. Some material may be inappropriate for children under 13. (CNS photo by Marvel Studios)

Yet the big canvas on which Zhao works ends up feeling remarkably empty.

In following the exploits of an ensemble of alien superheroes belonging to the titular class of imaginary beings — one of several cooked up by artist and writer Jack Kirby more than 40 years ago — Zhao and her script partners, Patrick Burleigh and Ryan and Ryan Firpo, alternate battle scenes with sequences focused on the relationships among the extraterrestrials. Yet neither basic ingredient really works.

The confrontations pitting the Eternals against dinosaurlike predators called Deviants — our heroes were dispatched to Earth thousands of years ago by a higher power called Arishem (voice of David Kaye) to protect humans from these marauding monsters — feel puerile. The sight of the good guys zapping Deviants with beams and balls of energy was likely more impressive on the printed page back in the ’70s.

As for the romantic and other bonds uniting the admittedly well-delineated principals, they range from the straightforward to the morally tangled. An instance of the former is the friendship that prompts burly, lighthearted Gilgamesh (Don Lee) to shield normally dignified Thena (Angelina Jolie) from the worst effects of the fits of mental instability and aggression to which she’s subject.

Yet, even the backstory of the main couple, empathetic Sersi (Gemma Chan) and hard-driving Ikaris (Richard Madden), by contrast, has its serious complications. Shortly after their first night of passion centuries ago, the two were married in a Hindu ceremony. But Ikaris subsequently deserted Sersi.

So, after waiting for her husband’s return for hundreds of years, Sersi, as the picture opens, has recently taken up with human Dane (Kit Harington), her co-worker at London’s Natural History Museum. They also get prematurely physical, only to have a global emergency lead to Ikaris’ reentry on the scene.

As interstellar warrior-turned-Bollywood-star Kingo (Kumail Nanjiani) perceptively intuits, his diminutive colleague Sprite (Lia McHugh) also carries a torch for Ikaris. But since, no matter how long she lives, Sprite remains perpetually a 12-year-old girl, her yearnings can never be fulfilled.

These days, the Mouse House seldom misses an opportunity to wave the rainbow flag. So nothing will do but Phastos (Brian Tyree Henry), the group’s tech whiz, must be given a civil spouse in the person of Ben (Haaz Sleiman), with whom Phastos is raising a young son.

Once the Eternals discover that the purpose of their mission is not what they have always believed it to be, they face a dilemma based, in part, on the connection they have formed with humanity. The working through of this problem finds the characters on a more Scripture-friendly foundation, with most of them rejecting the idea that a good end can justify destructive means.

So, at least some of this sci-fi adventure’s values are on target. And the banter in the dialogue does draw the occasionally laugh. But, overall, there’s more space than substance on display, despite lavish production values and a more-than-ample running time.

The film contains frequent stylized combat, a suicide, semi-graphic premarital sexual activity, an adulterous situation, a benignly viewed homosexual relationship, a same-sex kiss, at least one mild oath, a few crude terms, a single crass expression and an obscene gesture. The Catholic News Service classification is A-III — adults. The Motion Picture Association rating is PG-13 — parents strongly cautioned. Some material may be inappropriate for children under 13.