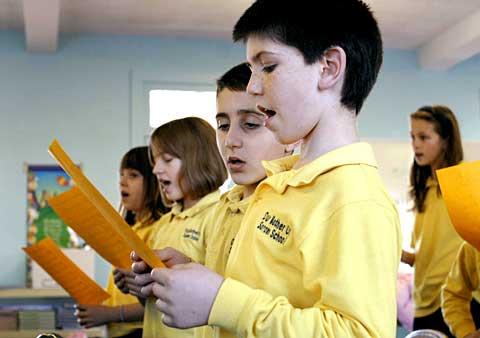 David Tierney (right) and Connor Sisca sing along with the rest of the fourth-grade choir Jan. 22 at Greece’s Our Mother of Sorrows School.

"The kids are listening to such horrible things outside of school, (which are) so very often tearing them away from their faith, from the church," Henry recently told the Catholic Courier.

Henry said that luckily she has a chance to counter those negative influences by exposing her students to music with positive, Christian messages.

"It just gives the kids an opportunity to have their faith built, and to be involved in faith-building things," she said.

Henry and Our Mother of Sorrows provide many of these opportunities for students, who are able to join several different choirs during their years at the school. One choir is for fifth- and sixth-grade students and the other is for fourth-graders, although Henry said usually she allows third-graders to join the choir in the springtime. A third choir, called the Angel Choir, is open to students in the fourth through sixth grades, and members of this choir sing at school Masses.

"They lead music at Mass and the cantors for the Mass come from the choir. We normally have Mass once a month, but of course with special holy days we may have (Mass) a couple time a month," Henry said.

Leading the music at Mass helps students feel empowered, she said, noting that several studies have proven the value of including musical components in educational programs.

"Children who are involved in learning musical things also do better in their other classes," Henry said. "Music and the arts are one of the focuses here. It’s just part of their all-around development, and it’s something that they will use for their entire life."

Choirs also give students the opportunity to exercise their love of singing and music, and to bond with other students who feel the same way, Henry noted.

"Of course there’s the fun of doing things together," she said.

For example, students get to practice their division and fraction skills when they read music, Rutledge said.

"We do our musical math," she remarked.

Rutledge said she often tries to incorporate into her lessons the various topics students are learning about in other classes. In January around the time of Martin Luther King Jr. Day, for example, she had her students learn songs about the famed civil-rights leader.

"I just think it rounds it out, where you’re not just sitting down and doing math and science and social studies and English. It kind of incorporates it all. It’s an incredibly important part of the academic experience," Rutledge said of music.

Rutledge directs a fourth- and fifth-grade choir at Holy Family Elementary, where students in these grades are required to be in the choir. These students sing several different types of music throughout the year, but Rutledge makes sure their repertoire always includes several religious pieces and at least one multicultural piece.

"We do a lot of movement, just kind of introducing them to a lot of different music," said Rutledge, noting that choir members currently are working on a spring musical with the third-grade class.

"It’s just a little more involved. The stuff we do with the younger kids is either (sung in) unison or two parts. In the middle-school chorus it’s always two parts, and depending on where they are I might try to throw in three parts," she said.

The chorus gives students the opportunity to showcase their unique talents, she added.

"It gives them a bit more confidence. It gives them ways to kind of shine where otherwise maybe they wouldn’t," Rutledge said. "It’s amazing to see how their peers respond, and they really give them a lot of respect. It’s very helpful to them."