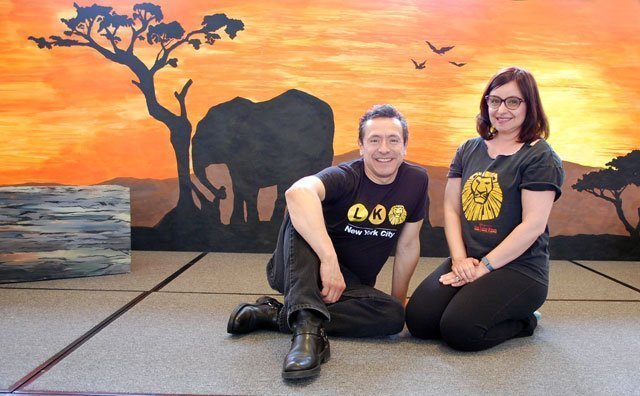 Enrique Segura, a Broadway actor, and his wife, Kristi, a choreographer, pose on the set of "The Lion King Jr." in early May at the School of Sacred Heart St. Francis de Sales in Bennington, Vt. "The Lion King Jr.," a 60-minute adaptation of the show about love and redemption, was created especially for the strengths and skill level of middle- school students.

The father of two students at the School of Sacred Heart St. Francis de Sales in Bennington — 9-year-old Nikolas and 6-year-old Jozef — and parishioner of the same-named parish has been performing in "The Lion King" for about 13 years, first in Germany and for the past 11 years on Broadway. His wife, actress/dancer Kristi Segura, choreographed "The Lion King Jr.," and he assisted.

"The Lion King Jr.," a 60-minute adaptation of the show about love and redemption, was created especially for the strengths and skill level of middle-school students.

Fifty-four of the school’s students in fifth through eighth grade performed in three shows this spring. And they learned about more than singing, dancing and acting.

"This builds confidence," Kristi said of being part of the show. It also helps with focus, discipline, memorization and teamwork.

"The Lion King Jr." is the story of a young lion prince in Africa. Born into the royal family, young Simba spends his days exploring the savanna grasslands and idolizing his father, King Mufasa, while shirking the responsibility of his position in life.

When tragedy, orchestrated by Simba’s wicked uncle, Scar, takes his father’s life, Simba flees, leaving his loss and the life he knew behind.

The adult Simba eventually makes his way back home to take his rightful place as king, a kind of prodigal son story. The show’s messages deal with consequences for one’s actions, facing one’s past and learning from it.

School Principal David Estes, director and musical director of "The Lion King Jr.," appreciated the religious aspect of this year’s production. "I like to try to find some sort of lesson in every show we do, but the lessons in ‘Lion King’ are probably bigger because they talk about the ‘circle of life,’ trying to get the kids to understand that everything is connected in God’s creation," he said. "We are all part of God’s family."

While working with students, Enrique — who lives part time in Bennington and part time in New York City — pointed out the spiritual aspect of the production to them.

"The spirituality is an integral part of the story," he told Vermont Catholic, Burlington’s diocesan magazine. "You can look at the (Disney) cartoon film and think it’s fun, but when (the show) was put on Broadway, they gave it more oomph and really leaned on the spiritual side and the African culture."

In African culture, beliefs hold that deceased loved ones remain a part of their living loved ones and vice versa. "There is such a great parallel" to the Catholic faith, he continued. "The saints, Jesus, God … are always looking down upon us and seeing everything we’re doing. They are part of us and we are part of them. … We are still connected" after death.

Kristi said the music of the show also is powerful; it features Elton John and Tim Rice’s Oscar-winning "Can You Feel the Love Tonight."

The school production brought together numerous disciplines including language arts, social studies, music, dance and art. "And it has a universal message, told through the eyes of animals, that we need to work together globally;in the circle of life we are all connected and have responsibility for the whole world," Estes said.

Jonah Hydzik, a seventh-grader who played King Mufasa, said "The Lion King Jr." exemplified for him that "even though you get lost sometimes, God is always there for you."

Elizabeth Malinowski, a seventh-grader who played the young Nala, said for her the show promoted respect for all life and the importance of working together.

The Seguras met while acting in Germany; they lived in New Jersey before moving to Vermont to raise their family eight years ago.

They chose the School of Sacred Heart St. Francis de Sales for their sons not only for academic excellence, religious training and community atmosphere but for the strong arts program. "The arts are part of the jungle of society not something to be easily disposed of," Enrique said.

Estes pointed out that studies have shown that students who participate in the arts do better in school.

To prepare for the show, students learned songs and lines in African languages, deepening their multicultural experience as well.

And they learned about heaven.

Even after Simba’s father died, he could still feel his presence with him.

"The lesson about death is we don’t just die. There is eternal life in heaven," Estes said.

Enrique plays "Ed" in "The Lion King" on Broadway.

It is one of the most popular stage musicals in the world and premiered on Broadway in 1997.

Before the school’s production opened, those involved with it received a fax signed by the entire Broadway cast of "The Lion King" wishing them the best as they prepared for opening night. "It was awesome and the students were elated to receive it," Estes said. "Very moving."

Urban is a staff writer for Vermont Catholic, the magazine of the Diocese of Burlington.