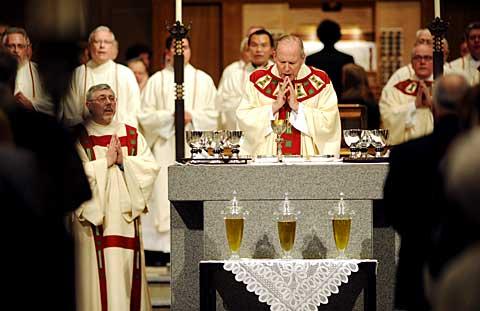 ROCHESTER — Deacon Dennis Donahue said he will be able to add more meaning to the baptism of his grandchild this summer, now that he has attended the diocesan Chrism Mass, which took place March 30 at Sacred Heart Cathedral.

"There’s so much more that I can say about the process and the Chrism," said Deacon Donahue, who was ordained in 2009 and who serves at Good Shepherd Catholic Community’s Union Springs worship site.

Deacon Donahue was part of a busload of people who traveled to the annual Chrism Mass from Auburn and surrounding areas. During his homily, Bishop Matthew H. Clark recognized the Auburn group for having chartered a bus to attend the Mass for the past 28 years.

They were joined by hundreds of others from throughout the diocese who filled the cathedral to witness the priests of the diocese renew their commitment to priestly service and to see the blessings of the sacramental oils: the Oil of the Sick, the Oil of Catechumens and the Sacred Chrism. Following the Mass, representatives from each parish in the 12-county diocese brought the sacred oils back to their parishes for use throughout the year.

The Oil of the Sick is used to anoint those who need healing. Catechumens are the unbaptized who are anointed during the sacraments of initiation and received into the Catholic Church.

Sacred Chrism, which gives the Mass its name, is used to anoint infants who are baptized, young people and adults who are confirmed, and new priests who are ordained. It also is used to dedicate new or renovated churches and altars.

During the Mass, Bishop Clark mixed the essence of balsam with olive oil to make the Sacred Chrism richly fragrant. During the consecration prayer, he noted that the use of olive oil recalls the dove with an olive branch announcing the return of peace to the earth following the great flood.

"Let this oil permeate them and make them holy; let it free them from the corruption to which our flesh is heir and make them temples of your glory, filled with the fragrance of innocent and spotless lives," Bishop Clark said during the prayer of consecration of the Sacred Chrism.

The bishop called the Mass an evening of joy, renewed hope and renewed promise in Christ. He praised the large turnout and the enthusiastic participation of those gathered.

"It brings me encouragement and helps me to understand what it is and what it means that the Lord had anointed me and you," Bishop Clark said in his homily.

He asked those at the Mass to keep in their prayers others who needed healing.

"I would invite you, as we celebrate this wonderful liturgy, to be in touch with your own need to continue to be healed, to be engaged, to be strengthened, to be illuminated and guided in your journey of faith," he said in the homily.

Julia Knitter, who helped bring up the Oil of the Sick for the blessing, said she was honored to have been chosen to participate in the Mass. Knitter represented Patrick Place, a comfort-care home being formed jointly by the four parishes of the Five Saints West planning group (St. Mary of the Assumption, Scottsville; St. Columba/St. Patrick, Caledonia; St. Vincent de Paul, Churchville; and St. Christopher, North Chili). Patrick Place will be located in the rectory at St. Mary of the Assumption, where Knitter is the manager of buildings and grounds.

"I am so profoundly grateful just to have people talking about Patrick Place, asking what it’s about, and what it’s going to become," she said.

Attendees said they were impressed by the music, which was led by the Diocesan Festival Choir and nine instrumentalists, and by liturgical dancers from Immaculate Conception Parish in Rochester. Hymns were sung in English, Latin and Spanish.

"The music reminded me of going to Rome," said Melva Prescod, a parishioner of Holy Apostles in Rochester.

"We especially loved the dance, and the drums were unbelievably wonderful," said Jan Roth, a resident of West Sparta in Livingston County and a parishioner of Holy Family Catholic Community in Wayland.

Others attendees said the Chrism Mass was inspiring.

"I think it’s phenomenal," said Shirley Wildrick of Dansville, Livingston County, a parishioner of Holy Family Catholic Community in Wayland. "It’s a real statement of our faith when we gather together as a community like this to see our priests renew their vows."

Kevin Pazyck of Henrietta, who attends Guardian Angels Parish and who will be received into the Catholic Church at the Easter Vigil, said the Mass had significance because the oil blessed will soon be used to anoint him. He said he also was moved by the solemnity of the Mass.

One priest interviewed said the participants went above and beyond during this year’s Chrism Mass.

"I thought it was wonderful," said Father Robert Schrader, pastor of Peace of Christ Parish in Rochester. "The music was outstanding. I’ve been to a lot of Chrism Masses, and this was the best by far. There were some new pieces, and they were very engaging. I hope to hear them more."