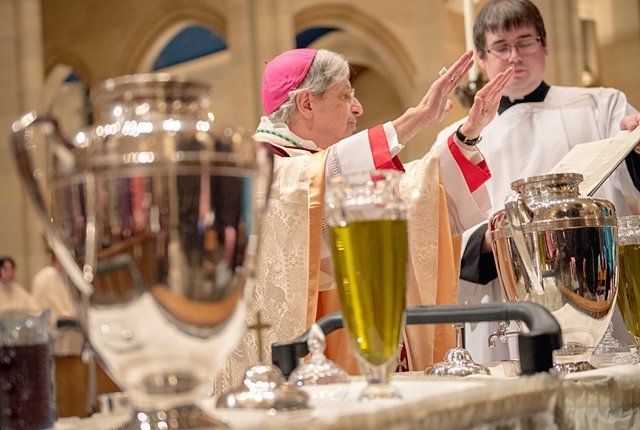 Bishop Salvatore R. Matano consecrates the sacred oils in the middle of Mass.

ROCHESTER — He knew it meant returning home to Ithaca after midnight, but that knowledge didn’t deter Father Joseph Marcoux from making his annual trek to the Solemn Mass of Chrism.

"I need to be here with my brothers. It’s the visible sign of unity," said Father Marcoux, pastor of St. Catherine of Siena Parish, just before the annual Chrism Mass began at Sacred Heart Cathedral March 22.

The brethren he mentioned were the several dozen priests of the Diocese of Rochester, who formed an impressively long line processing into the church. Later, midway through the Mass, they were the focus of one of the liturgy’s highlights: the annual renewal of priestly promises to Bishop Salvatore R. Matano, who celebrated the Mass.

During that rite, all the priests in attendance lined up to face the bishop, who asked them if they were resolved anew to the promises they made at ordination: being more closely united with Jesus; serving as faithful stewards at Mass and other liturgical rites; being faithful teachers; and performing their many priestly duties "not seeking any gain but moved only by zeal for souls."

Immediately following the priests’ renewal of promises, sacred oils — to be used in liturgies by parishes throughout the upcoming year — were brought forth. Bishop Matano blessed the Oil of the Sick, used for the anointing of the sick; the Oil of the Catechumens, for baptism; and the Holy Chrism, for confirmation and ordination. Once blessed, the vessels of oil were transported to a basement room in the cathedral. As Mass continued, volunteers distributed the oils into hundreds of marked containers so that representatives of all diocesan parishes could take them back to their respective faith communities after Mass. 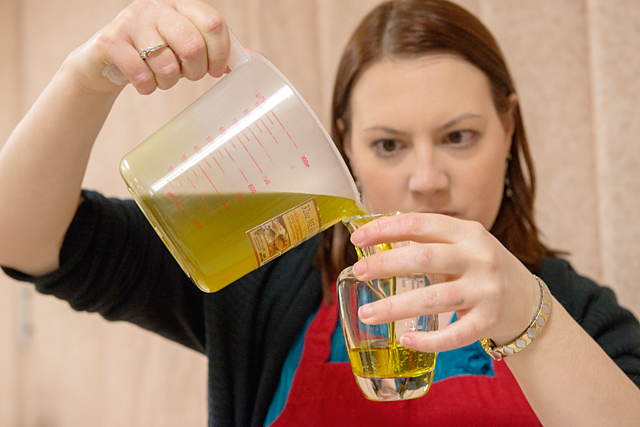 Ashley Gray hurries to fill containers with sacred oils before the conclusion of Mass.

The Chrism Mass, celebrated in this diocese each year on the Tuesday of Holy Week, is notable for bringing together representatives of parishes from every part of the Rochester Diocese. Father Steve Lape, pastor of Schuyler Catholic Community, shared Father Marcoux’s sentiment about the importance of attending the liturgy.

"It’s good to be able to renew my priestly ministry and to bond with my fellow priests," Father Lape said. He added that he not only catches up with other clergy, but also gets to renew acquaintances with parishioners of churches where he previously served.

"It’s kind of like a big family reunion," he remarked.

Father John DeSocio, pastor of St. Mary Southside Parish in Elmira, acknowledged that the Chrism Mass is cherished by laypeople in attendance as well as the priests. Sacred Heart was filled nearly to capacity March 22 for the nearly two-hour liturgy, which was enhanced by stirring music from the diocesan choir.

"When people come, they’re struck by the beauty and the reverence of the Mass and they get a deeper understanding of the sacred oils," Father DeSocio said.

He added that he, likewise, was inspired toward deep reflection on the meaning of the liturgical oils. The blessing of the Holy Chrism, for example, sparked Father DeSocio to think about the people from his church and Elmira’s Christ the Redeemer and Blessed Sacrament parishes, 16 in all, who were to be welcomed into the Catholic Church during the Easter Vigil four days later, as part of the Rite of Christian Initiation of Adults.

He said the sight of the Holy Chrism also stirred memories of past ordinations at the cathedral, particularly from when he served as diocesan assistant to the bishop for vocations and priestly formation from 1993-2002.

Regarding the Oil of the Sick, Father DeSocio noted that "I did two anointings (March 22 in Elmira) before I came here, and told those people I was going to Rochester and coming back to anoint them with the new oils."