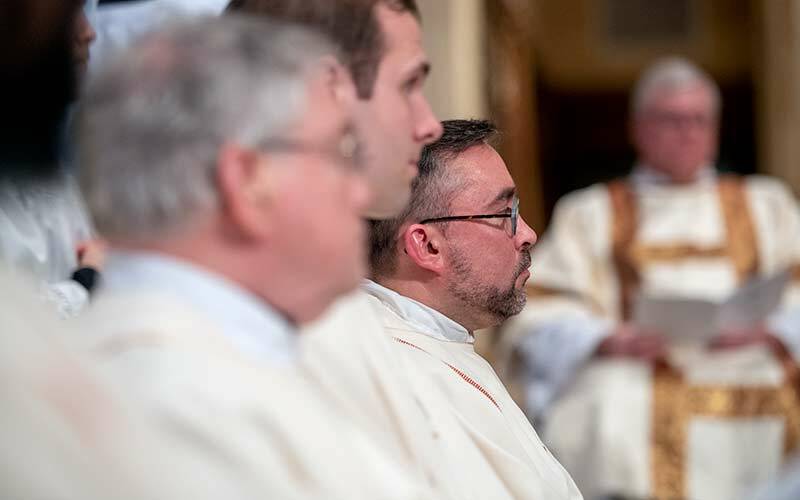 Father Matthew Jones of All Saints Parish in Corning is seen during the April 12 Solemn Mass of Chrism at Rochester’s Sacred Heart Cathedral. (Courier photo by Jeff Witherow)

Clergy and laity, from all parts of the 12-county Diocese of Rochester, filled the cathedral nearly to capacity April 12 for the annual Solemn Mass of Chrism.

“It’s so nice to see this many people coming out, showing this much love and faith,” said Freddie Collins, 14, as he sat with several fellow youths from Corning’s All Saints Parish just before the liturgy began. An eighth-grader at All Saints Academy, Freddie had traveled by van in a group organized by Father Matthew Jones, pastor. They were among a large representation of Southern Tier participants who journeyed to Rochester.

The 90-minute Mass was celebrated by Bishop Salvatore R. Matano and featured his blessing and consecration of the sacred oils midway through the liturgy. These oils are the Oil of the Sick, used for anointing those in need of healing; Oil of Catechumens, for anointing the unbaptized upon their initiation into the Catholic Church; and the Sacred Chrism, used for baptisms, confirmations, and ordinations. Following the Mass, the oils were distributed to representatives from diocesan parishes who brought them back home to be used in their faith communities throughout the year.

Father James Jaeger, pastor of St. John Vianney Parish in Bath and Hammondsport, noted after Mass that he planned to put some of the oils to valuable use “immediately.” He explained that he also ministers at the Veterans Administration medical centers in Bath and Canandaigua, and would soon be visiting patients at those facilities in need of anointing.

Also expecting to see the oils put to quick use was Rosemary Nabogis, who serves as Rite of Christian Initiation of Adults coordinator for Schuyler Catholic Community in Watkins Glen and Odessa. Nabogis noted that she brought a group of 10 people to Rochester, including several who were to be welcomed into the Catholic Church at the cluster’s Easter Vigil liturgy April 16.

“It was awesome being able to say, ‘There is the oil you will be anointed with on Saturday night,’” Nabogis said.

Model Jesus to the world

Another focal point of the April 12 gathering was the renewal of priestly vows, just before the blessing and consecration of the oils. Dozens of diocesan priests, assembled in the sanctuary, responded in the affirmative as Bishop Matano asked if they resolved to renew the promise of their vocation; to be more united with Christ in carrying out their priesthood; and to conduct their ministry “not seeking any gain, but moved only by zeal for souls.” The bishop then asked the congregation to pray for the priests as well as himself.

Father Jaeger, who said he’s regularly attended the Chrism Mass since his priestly ordination 36 years ago, acknowledged that the renewal of vows serves as a valuable reminder of his priorities as a priest.

“It’s important that we model Jesus to the world,” he said.

Celebrating as a diocese

The Chrism Mass customarily takes place in the Diocese of Rochester on the Tuesday of Holy Week. This year marked the first sizable gathering for the special liturgy since 2019; that had not been possible in 2020 or 2021 due to the coronavirus pandemic.

An extra highlight for the Corning youth contingent occurred after Mass, when Bishop Matano spent a few minutes chatting with them and Father Jones gave them a quick tour of the cathedral. Freddie described the architecture as “beautiful,” adding that “I especially like the ceiling.”

Those attending the April 12 liturgy also included many members of religious organizations and apostolates, women religious, and permanent deacons. One such person was Deacon David LaFortune, who serves at Ss. Isidore and Maria Torribia Parish in Addison, Bradford and Campbell. He said that he was present at the liturgy for practical reasons — “We needed someone to bring back the oils,” he remarked with a laugh — yet he also noted the importance of uniting for a truly diocesan celebration at the mother church.

“It reminds me that we are, all of us, neighbors, and (the Diocese of Rochester) is our local parish,” Deacon LaFortune said.

Tags: COVID-19 Pandemic, Holy Week
Copyright © 2022 Catholic Courier, Inc. All rights reserved. Linking is encouraged, but republishing or redistributing, including by framing or similar means, without the publisher's prior written permission is prohibited.