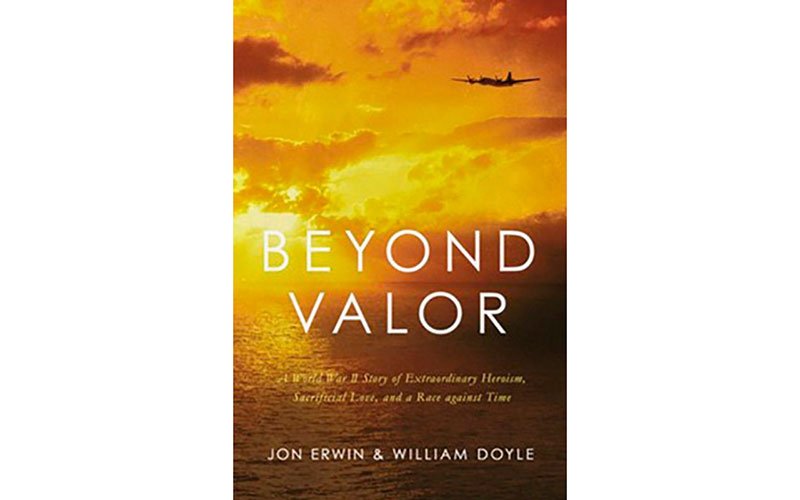 This is the cover of the book "Beyond Valor," by Jon Erwin and William Doyle. (CNS photo courtesy Thomas Nelson)

WASHINGTON (CNS) — Jon Erwin, in tandem with older brother Andrew, has directed movies with Christian themes over the past decade, including “October Baby” “I Can Only Imagine” and “I Still Believe.”

But between movies, Erwin collaborated with William Doyle to write the book of his grandfather’s service in World War II: “Beyond Valor: A World War II Story of Extraordinary Heroism, Sacrificial Love and a Race Against Time,” which will be published Aug. 18.

Erwin’s grandfather, Henry “Red” Erwin, received the Medal of Honor for his efforts in picking up a burning phosphorous bomb that had ignited prematurely and heaving it out of the B-29 “superfortress” aircraft. The bomb would have not only wiped out his aircraft and its crew, but wreaked havoc on a formation of B-29s headed to a mission over Japan.

Erwin, in a phone interview with Catholic News Service, said it was the first Medal of Honor OK’d by President Harry Truman; Red’s mission took place the day after Franklin Delano Roosevelt’s death.

“He was really burned,” Erwin said of Red, a lifelong Methodist he called “Granddad” growing up. One of Red’s duties aboard the aircraft was to drop phosphorus bombs through a chute in the aircraft’s floor. The one that ignited prematurely came back up through the chute and Red fully absorbed the flames.

“I was laying on the deck, and I was in sheer agony,” Red recalled in “Beyond Valor.” “(Crewmates) Bill Loesch and Herb Schnipper got the first aid kit down, and I told Herb to give me a syrette of morphine. But they wanted to keep giving me morphine, and as the plane’s first aid man, I knew that was dangerous. I was mortally afraid they were going to give me too much morphine.” He told his crewmates, “You’re going to kill me if you give me more morphine.”

“He was praying to God and to his mother,” Schnipper remembered.

“Starting with a colonel who was on board the plane,” Erwin told CNS, “they were so moved by the extreme level of sacrifice and heroism he displayed, they woke up (Gen.) Curtis LeMay the next morning, who was like the (Gen. George) Patton of the Pacific, and used his abrasiveness to get it (the Medal of Honor request) to Washington immediately.” Truman gave quick approval.

“LeMay really was insistent that he wanted to pin the medal around my grandfather’s neck before what they thought was his death,” Erwin said. But Medals of Honor don’t grow on trees, and next to none were to be found in the Pacific.

But there was one in a display case at Pearl Harbor, Erwin said. “It was a very long flight (made by) a secret crew. They smashed the window … and they got it to the general’s office and he pinned it on my grandfather’s neck just seven days after the incident.”

Erwin added there was serious doubt about Red’s survival due to the extent of his injuries. He had third-degree burns; the flaming bomb seared off an ear and obliterated his nose. But Red Erwin didn’t die. He underwent numerous skin grafts and surgeries as well as arduous physical rehabilitation over the next two years, and he lived 57 years after war’s end, until 2002. He died at age 80.

One big part may have been Red’s wife, Betty. Before the incident, Erwin said, “he was a good-looking guy. He was terrified at what she would think. … A lot of guys thought their wives would disown them. … He was down to about 85 pounds and had already endured about two dozen surgeries. But she touched the only unburned portion of his cheek, kissed him and said, ‘I love you.'”

Erwin’s father, Henry Jr., kept Red’s story alive in 2006 with his self-published book “When Courage Calls: The Red Erwin Story,” but now Erwin says that “on behalf of the family,” he considers himself to be “the custodian of the story.” And, as a filmmaker, he’s not about to let the movie rights go.

His one regret: “I didn’t really listen to his stories like I should have. I wasn’t listening, and I wasn’t as interested in the Greatest Generation and the war that they fought and the times that they lived in. I would give anything to go back and have those conversations now.”

“Folks, take the time to sit down and listen to your grandparents,” he advised.

However, over 15 years, Erwin discovered crewmates and others who knew his grandfather to help fill in the story and flesh out his portrait of Granddad. Grandmother Betty “knew what I was up to,” he said, but she never allowed him to read the love letters they exchanged during the war; he saw them only after she’d died a few years ago.

One thing he learned anew in writing the book” “Going up and beyond the call of duty is something we can all apply to what Jesus said. ‘If you go one mile, go two.’ Do more than what is required of you. It’s one of the defining characteristics of being a Christian.”