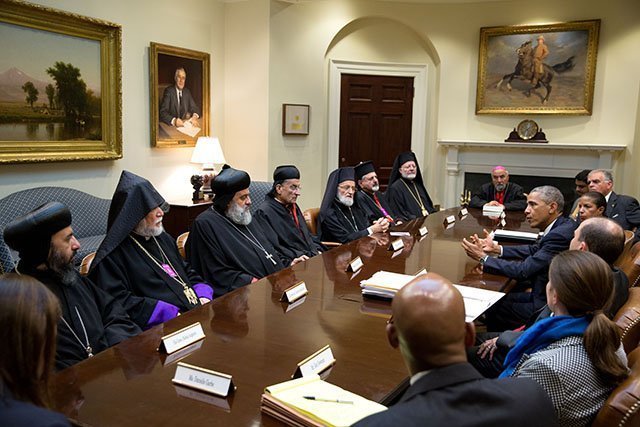 U.S. President Barack Obama gestures during a meeting with Lebanese Cardinal Bechara Rai, fourth from left, and other religious leaders at the White House Sept. 11.

WASHINGTON (CNS) — Eight Eastern Christian leaders spent 40 minutes talking to President Barack Obama about the situation of Christians and other minorities in the Middle East.

"We felt how deeply moved he was by what was happening to the Christians there," Lebanese Cardinal Bechara Rai, Maronite patriarch, said at a Mass later the same day at Our Lady of Lebanon Maronite Catholic Church. The Sept. 11 Mass closed the three-day inaugural In Defense of Christians summit. A conference organizer told Catholic News Service an American businessman from the Middle East sent his private jet to transport the Christian leaders to the summit.

The cardinal said each of the leaders from Eastern Catholic and Orthodox rites had a chance to speak individually to Obama, who the White House said "dropped by National Security Advisor Susan Rice’s meeting at the White House."

Although the White House did not release details of the discussion, throughout the summit the Christian leaders spoke of the threat to Christians and other minorities posed by Islamic State militants, particularly in Iraq and Syria. Several said they were advocating religious freedom, an inherent right. They spoke of the need for local leaders and the international community to become involved in a solution because, as one Orthodox bishop said, "no one can possibly agree to a beheading."

A White House statement, read out near the end of the In Defense of Christians summit, said Obama reinforced the U.S. commitment to fight Islamic State militants and other groups that threaten the Middle East, as well as American personnel and interests in the region.

"He underscored that the United States will continue to support partners in the region, like the Lebanese Armed Forces, that are working to counter (Islamic State fighters) and promote regional stability. The delegations agreed on the need for all leaders in the region to reject violence and prejudice and call for moderation, tolerance of other views and religions, and an end to sectarian divisions.

"The president emphasized that the United States recognizes the importance of the historic role of Christian communities in the region and of protecting Christians and other religious minorities throughout the Middle East," the statement said.