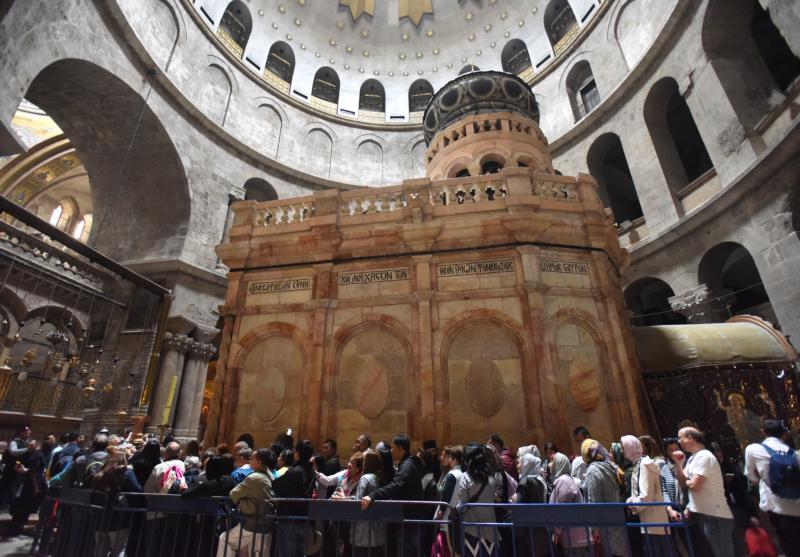 People wait to enter the Edicule, the traditional site of Jesus' burial and resurrection, March 23 at the Church of the Holy Sepulcher in Jerusalem.

JERUSALEM (CNS) — Restoration of the Edicule — the traditional site of Jesus’ burial and resurrection — is being hailed as a example of ecumenical cooperation.

Less than a year after restoration work began, the Edicule was inaugurated in a March 22 ecumenical ceremony at Jerusalem’s Church of the Holy Sepulchre. The ceremony was led by representatives of the Roman Catholic, Greek Orthodox, and Armenian churches, including Ecumenical Patriarch Bartholomew of Constantinople.

Several hundred local faithful, pilgrims and international dignitaries filled the main area of the basilica where the Edicule is located, taking pictures and videos of the pink-stoned structure.

“It is a very exciting day which hasn’t happened in hundreds of years. It is a very big step, we are all united in celebration,” said Marlen Mauge, 53, a Catholic from Jerusalem. “We would like to have more than one united celebration. It is a good message to the world.”

In 1947, British Mandate authorities had installed metal girders to keep the Edicule standing, but structural concerns began mounting in 2000. Rehabilitation of the 200-year-old structure began in June 2016 following a determination by Israeli authorities that the Edicule was unsafe. Leaders from the three churches that share custody of the Church of the Holy Sepulcher came to an agreement for the work to proceed.
The success of the restoration project is a sign that “with God, nothing is impossible,” said Archbishop Pierbattista Pizzaballa, apostolic administrator of the Latin Patriarchate of Jerusalem.

Franciscan Father Francesco Patton, custos of the Holy Land, said it was “providential coincidence” that this year, as the Edicule is restored, all Christian denominations celebrate Easter on the same date. It was also fitting, he said, that the Church of the Holy Sepulcher drew the churches together in a closer relationship.

Several sites of Jesus’ birth, death and resurrection have been undergoing restoration work. The Franciscan Custody of the Holy Land announced in late March that the Vatican had pledged a further $1 million for the second phases of projects at the Church of the Holy Sepulcher and the Basilica of the Nativity in Bethlehem.

Catholic contributions to such efforts are supported by the annual Holy Land Collection, which is conducted in churches worldwide on Good Friday, which is April 14 this year.

The collection ensures not only that buildings remain accessible, but also that local Christians are able to stay in their homeland, Vatican officials noted. Funds gathered support young families, parishes, seminaries, schools, hospitals and clinics, refugees and small businesses.

The hoped-for second phase of the Edicule restoration would seek to resolve problems due to moisture under the floor. Work cannot begin, however, until details of the project are agreed upon by the Catholic, Greek Orthodox and Armenian Orthodox communities that share responsibility for the church.

The work in Bethlehem has restored Crusader-era mosaics and brought to light some that had been plastered over. The next phase — also pending ecumenical agreement — would include work on the church columns, floor mosaics and the grotto, which is marked as the birthplace of Jesus.