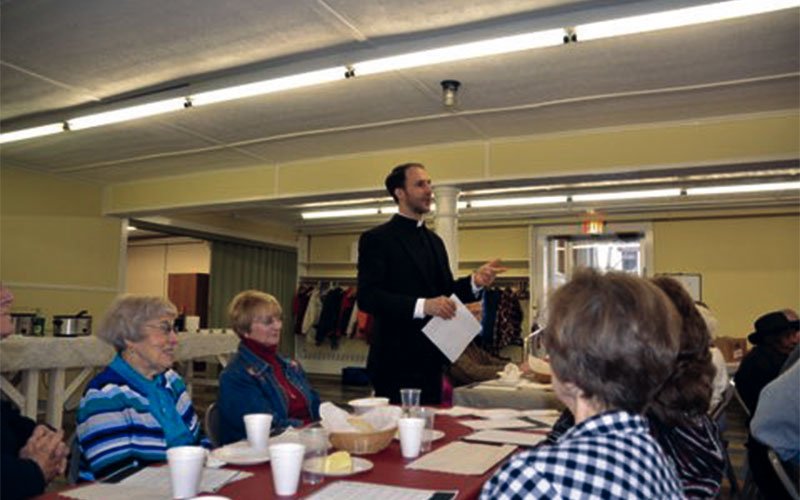 Father David Tedesche, pastor of St. Joseph the Worker Parish, gives a presentation during one of the Soup and Sharing sessions that took place in Lyons during Lent 2019.(Photo by John and Pat Hewes)

Each Tuesday during Lent, members of the various Christian congregations in Lyons gather together for a simple supper of homemade soups and bread, followed by a presentation on a faith-related topic.

Although many of these presentations shed light on the differences between the denominations, the events also seem to bond the members of Lyons’ Christian community together, and the events run so smoothly that the hardest part of each evening is deciding which homemade soup to enjoy, according to the Rev. William Wigmore III, pastor of Lyons’ First Lutheran Church.

“That’s the toughest decision. They all look good, and you don’t want to offend anyone,” remarked the Rev. Wigmore, who also is president of the Lyons Inter-Church Council.

The annual Lenten Soup and Sharing program is one of the council’s most popular offerings, according to fellow council members John and Pat Hewes. The council’s member congregations each take turns hosting one of the weekly sessions. During a particular congregation’s week to host the event, its members will make and bring several crocks of soup, and a representative — usually the pastor — will lead the evening’s discussion or give a presentation.

“Sometimes it hasn’t even been a talk. We’ve had a skit. We’ve had crosswords and different word jumbles and things. Each church is welcome to do their own idea or take on the theme of the year,” remarked Pat Hewes, who serves as the council’s treasurer and represents her congregation, First Lutheran Church.

“We do different things. Sometimes it could be a game show,” the Rev. Wigmore added.

Regardless of the format, each session’s content is related to a common theme, chosen each year by the members of the Inter-Church Council, noted John Hewes, who represents St. Joseph the Worker Catholic Parish. Previous themes have ranged from women in the Bible to Holy Week services.

“One of the things we’ve talked about is each church’s worship service, how they’re different, how they’re the same,” the Rev. Wigmore explained. “This year our theme is ‘Following In the Way of the Saints,’ so we’re going to get a different perspective from each church and explain how saints are (important) to their church.”

Deacon Greg Kiley will be the presenter on March 10, when it’s St. Joseph the Worker’s turn to host a session, which will begin at 5 p.m. at St. Michael Church, located at 3 Holley St. in Lyons.

It’s not unusual for 60 or 70 people to come out for Soup and Sharing, with some sessions even attracting 90 people, Pat Hewes said.

“Lent is something we all believe in, and I think it pulls the community together,” she said.

The series provides an opportunity for Christians to focus and reflect on their faith during Lent, her husband added.

“It’s a special time of the year for Christians. I feel a real part of a community that is honoring this Lenten season, coming together and breaking a little bread and soup and talking at the table, just being together,” John Hewes said.

The series also promotes a sense of camaraderie among the members of the different congregations, he said. The congregations who belong to the Lyons Inter-Church Council work together on numerous other projects throughout the year, including a community Thanksgiving dinner as well as a baccalaureate service and scholarship for high-school seniors.

“We work very well together. We’re just trying to work together in the community and honor these Christian values,” John Hewes explained.

“I think (the council) is rather unique. We’ve had people comment to us before that this doesn’t happen in a lot of places,” Pat Hewes added.

This level of ecumenical collaboration is rare, agreed the Rev. Wigmore, whose previous pastorate was in Philadelphia.

“What attracted me to Lyons was this Inter-Church Council. In any community I’ve been in, I’ve never seen churches work together like they do in this council. It’s a big thing,” he said.

The collaboration between the congregations is enjoyable and informative, yet it also serves a larger purpose, he added.

“I think it’s important for the Inter-Church Council to be a witness to Christ in the community. We’re different denominations, but we’re still Christians,” he said.