Christians witness against the horror of torture - Catholic Courier 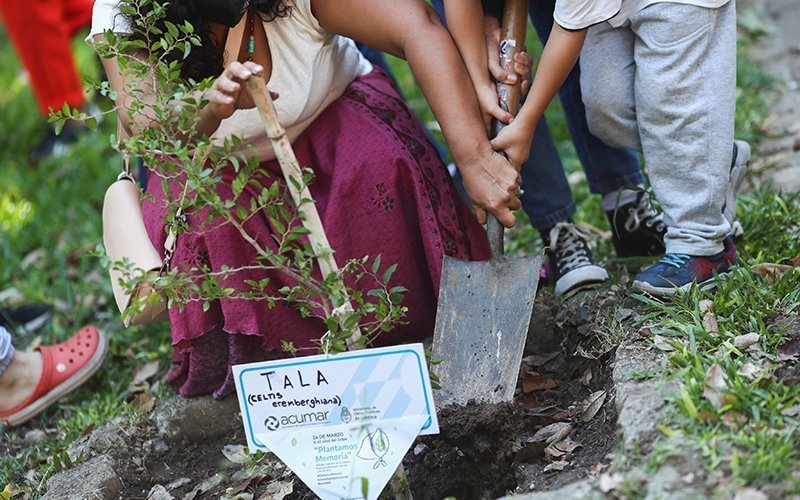 Relatives of disappeared people in in Buenos Aires, Argentina, plant a tree as a homage March 24, 2021, the 45th anniversary of the 1976 military coup at the former Naval Mechanics School building which was used as a torture center. (CNS photo by Agustin Marcarian/Reuters)

What does the church teach about torture?

Torture was back in the news in February, as if we needed the gruesome reminder. “60 Minutes” ran a graphic piece on the torture conducted against its own citizens by the regime of Syrian President Bashar Assad.

Obsessive record keeping on the part of Assad’s administration rendered this: thousands of photos of mutilated, burned, emaciated victims, chronicled by number at the morgue by an official photographer who later smuggled the pictures out of the country. One victim was a tortured 14-year-old boy whose crime was having a protest song on his phone.

Closer to home, we learned of the death from cancer in February of Ursuline Sister Dianna Ortiz. Sister Ortiz was a beautiful young American nun who had gone to Guatemala in 1987 to teach Indigenous Mayan children.

The education of this population was viewed as a threat to the right-wing autocrats, and in 1989 Sister Ortiz was kidnapped from a convent retreat house garden and held for one unforgettable day.

While interrogating her about possible subversives among the Mayan poor, her captors burned her with cigarettes — a doctor later recorded 111 burns — and lowered her into a pit with rats and decomposing bodies.

She was raped repeatedly and forced to dismember another captive with a machete. While being transported from the kidnappers’ lair, she escaped. But the scars of her torture lived on. Sister Ortiz became an outspoken advocate for human rights.

As Catholics, we deplore the use of torture. Over the centuries, however, from the time when Christianity became the official religion of Rome, through the Inquisition, and even in recent times under the guise of a “war on terror,” we’ve had to reflect on how we may have sinned.

In 1998, St. John Paul II made a beautiful meditation on a visit to the Shroud of Turin, the cloth that many believe is the preserved burial shroud of Jesus. He reminded us that Jesus himself was a victim of torture, calling the shroud “the imprint left by the tortured body of the crucified one.”

Pope John Paul asked, “How can we not recall with dismay and pity those who do not enjoy basic civil rights, the victims of torture and terrorism, the slaves of criminal organizations?”

Did those who tortured Christ believe that somehow their end justified the means?

Have we sometimes done the same? Americans were shocked to see the photographs of suspects imprisoned at Abu Ghraib being mocked and tormented. And later tales of waterboarding and torture in an effort to extract information elicited a new U.S. conversation about torture.

In 2007, the U.S. bishops, in their document “Forming Consciences for Faithful Citizenship,” called torture “intrinsically evil” that “can never be justified.” That is the clear message of our faith.

Catholic history is replete with our own martyrs and victims of torture. Some of the oldest stories are shocking, but perhaps we can identify most with victims of the Holocaust. Millions of our Jewish brothers and sisters were killed, but also Roma, homosexuals, dissidents and many Catholics.

St. Maximilian Kolbe, a Polish priest who was arrested for helping to hide Jews, is one of the most famous. After an escape attempt at Auschwitz, the authorities randomly chose several men to starve to death — truly torture — to set an example.

One man chosen pleaded that he needed to remain alive for his wife and children, and St. Maximilian Kolbe offered to suffer in this stranger’s place.

St. Maximilian Kolbe endured the horror of starvation willingly to offer his life in the place of another, the true and hardest definition of Christianity, the moral answer to the sin of torture.

In the Gospels, Christ exhorted us to “love your enemies, do good to those who hate you.” As difficult as this teaching is, we Christians, like St. Maximilian Kolbe, must respond to torture as Christ did.

Effie Caldarola is a columnist for Catholic News Service and a freelance writer.