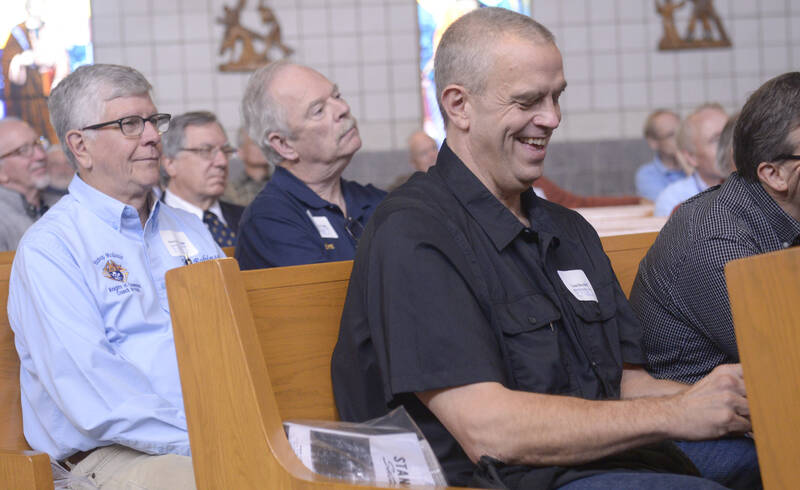 Men react as they listen to a speaker at the 2018 Rochester Catholic Men’s Conference. The 2022 conference will take place Oct. 15. (Courier file photo)

Next month, Paoletti and Deacon Lyons will get to hear from the program’s founder, Dave Nodar, when he speaks at the eighth-annual ExultRochester Catholic Men’s Conference. The conference will take place Saturday, Oct. 15, from 7:30 a.m. to 12:30 p.m. at the Parish of the Holy Family, 4100 Lyell Road in Gates. All men of the Diocese of Rochester are invited to attend.

Nodar, who lives in Ellicott City, Md., founded ChristLife in 1995 in response to St. John Paul II’s call for evangelization. Since then, more than 250,000 people have participated in the ChristLife parish-evangelizing process. Nodar previously visited the Diocese of Rochester for ChristLife training conferences. A number of diocesan parishes have conducted the ChristLife program within their parish.

A Mass celebrated by Bishop Salvatore R. Matano is another key component of the conference, which will be livestreamed for those unable to attend in person.

Paoletti and Deacon Lyons are serving as parish captains for this year’s conference, which is titled “Called and Sent.” As parish captains, they said they are responsible for spreading the word about the conference through bulletin articles, posting flyers and posters on bulletin boards, and distributing information cards in their respective parish communities.

“We (St. John the Evangelist in Greece) had a good response, given our parish size. COVID changed things for a while, but I’m optimistic that (our parish’s attendance at the conference) will get back to normal this year,” Paoletti said.

“We always wish it was more, but it has been a reasonable response,” Deacon Lyons said of participation from St. Marianne Cope.

Men’s conference important for many reasons

Paoletti has been involved in the the ExultRochester Catholic Men’s Conference since its inception in 2015. He said the is conference an important way to give men encouragement to get involved in parish life.

“When you look at Mass attendance, it seems to be dominated by women. And a lot of the roles in parish ministries are dominated by women, and men are a little too passive at participating in parish life,” he observed. The men’s conference is a good encouragement for men to remind them that it is all of our jobs to spread the faith.”

Deacon Lyons, also a longtime conference participant, believes spirituality is important to Christian life for Catholics and that the ExultRochester Catholic Men’s Conference provides that opportunity for spirituality, especially for people who don’t participate in retreats.

“I hope that (participants) will get excited about their faith, which is generally what we’d like to get out of every year of the conference, ” he said. “I think the idea (of the conference) is that men would become more involved in their parish and then the work of spreading the Gospel.”

EDITOR’S NOTE: Registration for the ExultRochester Catholic Men’s Conference is $25 for in-person participation and $15 for livestream access. Registration at the door is $30. For more information, visit www.exultrochester.org.