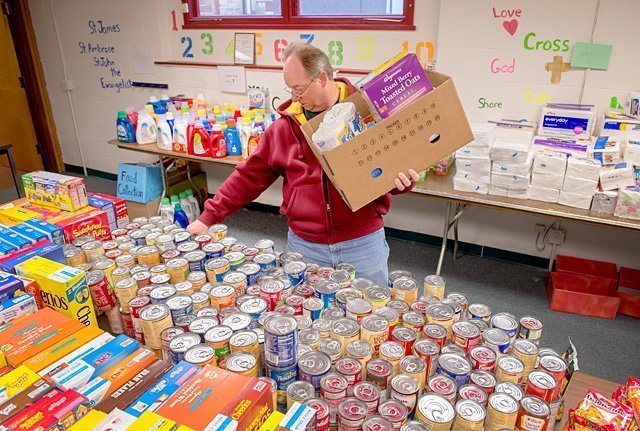 While visiting the Catholic Charities of Livingston County offices in mid-October, Jack Balinsky learned that area residents were seeking assistance for their heating bills — even though temperatures had barely begun to drop.

“Already people are coming in saying, ‘My propane tank is empty, I don’t have any money,'” noted Balinsky, who serves as diocesan director of Catholic Charities.

“Every dollar we get from the Christmas Appeal means one less time we have to say no, one more family we can help,” he remarked.

The 47th-annual appeal is set to begin at Thanksgiving and run through the end of February 2017. Organizers are hoping for another successful campaign following the 2015-16 appeal, which raised just over $43,000, surpassing its goal of $40,000 thanks to the support of 534 donors. The final tally — including a small surge in the campaign’s final days — marked a notable increase from the 2014-15 campaign, when $38,792 was collected.

A goal of $45,000 has been set for the new campaign, according to Karen M. Franz, general manager and editor of the Courier and El Mensajero Cat√≥lico newspapers. Proceeds will support the emergency funds of Catholic Charities offices and affiliated agencies throughout the diocese.

Donations large and small are welcomed. They can be mailed to the Courier or donated through ROC the Day, an annual 24-hour local community-wide fundraising on Tuesday, Nov. 29. Prospective donors can visit www.ROCtheday.org at any time that day to make a donation. The Christmas Appeal has participated in ROC the Day for several years now, Franz said.

Balinsky noted that virtually 100 percent of Christmas Appeal donations go directly to people in need, who — in addition to owing on utility bills — may be struggling to pay for rent, food, prescription drugs, transportation or other necessities. He said Christmas Appeal money is a vital source of unrestricted funds used to aid people in emergency financial crises who are either awaiting, or ineligible, for help from other sources.

Although he acknowledged that this funding may only cover a fraction of the actual need, Balinsky said it can serve as a first step forward for folks striving to get back on their feet.

“Every little bit helps,” he said.

EDITOR’S NOTE: Donations by check may be made payable to Christmas Appeal and sent to the Catholic Courier, PO Box 24379, Rochester, NY 14624. Please include your name, address, city, state, ZIP code, telephone number, and whether the gift is being made in honor or memory of someone. For more information, visit www.catholiccourier.com/christmas-appeal.