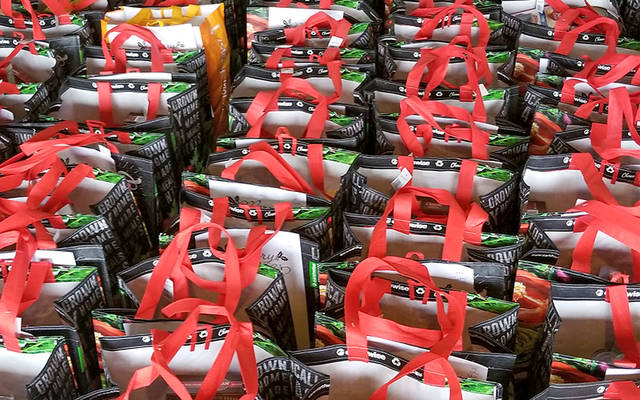 The generous donors who contributed to the 2019-20 Catholic Courier/Catholic Charities Christmas Appeal knew their donations would make a difference in the lives of peoples facing hunger or unexpected financial crises.

What they could not have known, however, is that their donations would come when the ministries and agencies they were supporting likewise faced a period of unprecedented challenge.

Each year Rochester’s Catholic Family Center combines a portion of appeal proceeds and a portion of donations to the Lenten Rice Bowl campaign to fund Hunger Relief Grants to ministries that serve people in need in Monroe County.

Unfortunately, the 2020 Rice Bowl collection had just begun when public Masses throughout the Diocese of Rochester were suspended in accordance with New York state regulations to stem the spread of COVID-19.

“Diocesewide, the Rice Bowl collections were at approximately 20 percent of where they were the year before. We were warning ministries that we may not be able to support them the way we had in the past,” said Marcus Ebenhoe, Catholic Family Center’s director of advocacy and parish social ministry.

This was especially bad news, since those very ministries were reporting a 20 percent increase in demand for their services in recent months, he said.

“As you can imagine, this is putting a strain on their ability to serve everyone. Thankfully, the Christmas Appeal saved the day for the Hunger Relief Grants. (The Christmas Appeal) collection was higher last year, and it made up for much of the shortfall,” Ebenhoe said.

In late November, Catholic Family Center was able to distribute more than $15,500 in Hunger Relief Grants to 12 local ministries, thanks to the boost from the Christmas Appeal, which annually raises money for the emergency funds of various Catholic Charities agencies, affiliated agencies and ministries throughout the diocese.

The 2019-20 Christmas Appeal raised $39,805.75, according to Chloe Longabaugh, appeal coordinator and circulation manager for the Catholic Courier and El Mensajero Cat√≥lico newspapers. More than 435 donations combined to help the appeal nearly reach its $40,000 goal for the first time in several years. These donations ranged in size from $5 to $1,350, but most individual donations were about $25 or $50, Longabaugh said.

The goal for the 2020-21 Christmas Appeal, now in its 51st year, remains $40,000, in recognition of economic challenges likely faced this year by prospective donors. Yet the need for such funding is greater than ever, according to Jack Balinsky, diocesan director of Catholic Charities. Since the advent of the COVID-19 crisis, demand for emergency assistance throughout the 12-county Diocese of Rochester has risen dramatically, with some agencies reporting a 150 percent increase in demand, he said. At the same time, the federal, state and local entities that previously funded such agencies and ministries have either cut their funding dramatically or, in some cases, eliminated it altogether, Balinsky added.

Balinsky recognizes that some people who have donated to the appeal in previous years may not be able to do so this year.

“Certainly we understand and don’t expect people who are experiencing difficulties should be stretched beyond their means,” he said.

He said he also understands many worthy charities are soliciting donations, especially at this time of year. Nonetheless, Balinsky said he hope those who are in a position to give will consider the Christmas Appeal when deciding which causes to support. Contributions allocated to agencies and ministries from the Christmas Appeal don’t come with a lot of stipulations, providing the flexibility to meet the immediate needs that arise in their communities.

“I am so appreciative of (donors’) willingness to help our mission to serve those most in need,” Balinsky said.