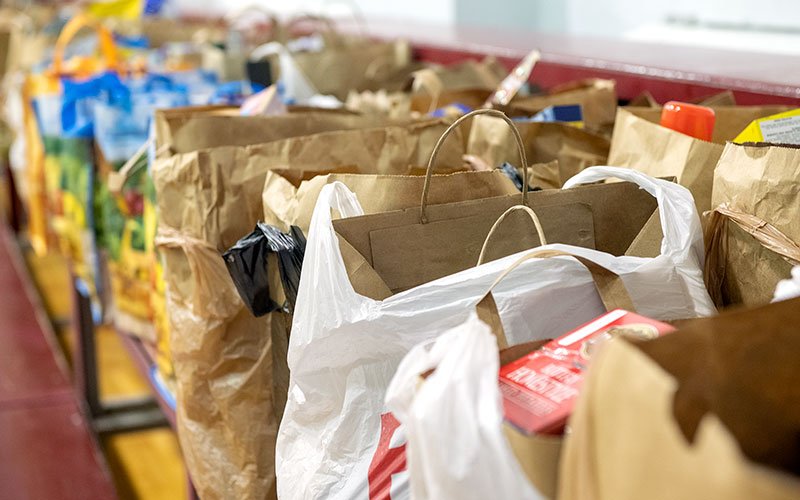 The St. Charles Borromeo food pantry is one of many recipients of funds raised through the Catholic Courier's Christmas Appeal. (Courier file photo)

As the Advent season begins, a new Catholic Courier/Catholic Charities Christmas Appeal is getting underway as well.

The campaign, now in its 52nd year, will run through the end of February 2022, aiming to reach a goal of $40,000 for the emergency funds of Catholic Charities, its affiliated agencies and ministries throughout the Diocese of Rochester .

“We’re grateful, obviously, for that support. We know the Catholic Charities agencies put the donations to good use, and that there was increased demand during the COVID pandemic,” said Karen Franz, general manager and editor of the Catholic Courier and El Mensajero Católico.

Franz noted that Christmas Appeal funding is unrestricted wherever it’s used in the diocese, saying, “The Catholic Charities leadership tells us year after year that this is an important campaign from their perspective, because the money has no strings attached, whereas much of the other funding they receive has restrictions attached to it.”

Franz and Ebenhoe said community need remains high as a new Christmas Appeal begins, noting that the pandemic continues to hamper availability of employment and government funding for social-service programs, while inflation is driving up the cost of daily living.

The very real possibility that such challenges may be affecting Christmas Appeal donors across the diocese’s 12 counties, as well as its beneficiaries, is why organizers did not raise the goal for this year’s campaign, Franz said. “We really hope those who are able could step up a little bit” to offset possible losses from donors who are themselves struggling to make ends meet, she added.

Ebenhoe stressed that all donations to the Christmas Appeal are vital whether large or small, noting that donors who only have a little money to donate still play a key role in the appeal’s success.

“People often overlook the impact that small gifts can make,” he said. “Every little bit, brick by brick — that’s how the church is created, doing what we can do. It can really make a large impact on the community, even if it’s $5 or $10 that you might think wouldn’t make a difference. Those gifts can add up.”

EDITOR’S NOTE: To contribute to the appeal, send checks payable to “Christmas Appeal” to the Catholic Courier, PO Box 24379, Rochester, NY 14624. Please include your name, address, city, state, ZIP code and telephone number, and indicate whether the gift is being made in honor or memory of somebody. To print out a donation coupon, visit https://catholiccourier.com/faith-and-family/christmas-appeal. Donations also occur through the United Way’s annual ROC the Day — a fundraising event for Rochester-area nonprofit organizations — which garnered nearly $3,300 for the appeal in 2020. This year’s ROC the Day was set to take place Nov. 30.