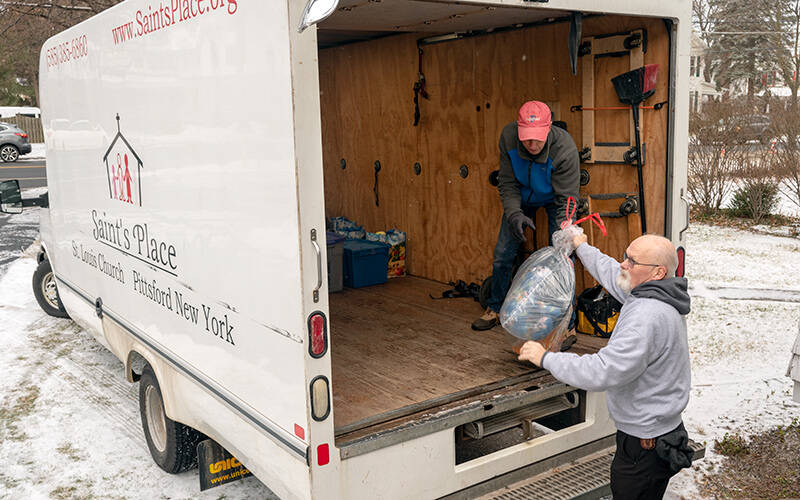 As Christmas approached, Andrea Golden, one of about 100 volunteers at Saint’s Place in Pittsford, prepared Christmas baskets for 50 refugee families in the Rochester area.

The baskets contained a variety of gifts for families Saint’s Place has helped to resettle, along with such agencies as Catholic Family Center and World Relief. The baskets were funded in part through the Catholic Courier/Catholic Charities Christmas Appeal, and they contained such items as small chinaware, silverware, toys, blankets, mittens and knitted hats, Golden said. Saint’s Place delivered the baskets to the homes of refugee families around several days before Christmas, she added.

Golden, a parishioner at St. Louis Church in Pittsford, said the Christmas baskets are stocked with items that St. Louis parishioners help purchase by selecting suggestions off a parish Angel Tree in the church lobby.

“The community has really taken the time to be intentional with their gifts in a really positive way,” she said.

Saint’s Place has been welcoming the stranger since 1998

Founded in 1998, Saint’s Place has served more than 16,000 refugees, providing them clothing, bedding and furniture. Over the years, the ministry has expanded into such areas as education funding and tutoring.

According to the ministry’s history, Colleen Knauf, the founder, was a parishioner at St. Louis when the call went out for volunteers to help refugee families. When Knauf drove over to the apartment of a Somali family of five, “she was stunned, shocked and then angry at how little they had in terms of possessions.”

Knauf got back in her car, returned home, emptied her linen closet and rifled through the closets of her children, pulling out as many articles of clothing as possible. Then she did the same for her wardrobe and her husband’s. She even took her children’s toys and then headed back to the family.

“In that moment, Saint’s Place became a reality,” according to the ministry’s history.

The initial storage location of Knauf’s garage has grown into multiple locations, including seven classrooms at St. John of Rochester Parish in Fairport, which houses the ministry’s clothing closet and household inventory. Saint’s Place now has a 7,000-square-foot warehouse filled with donated furniture, new beds and mattresses. The ministry also maintains offices at 46 S. Main St., next to St Louis Church.

Today, Saint’s Place serves an average of 1,200 families a year, according to Isabel Miller, executive director for the past eight years. Saint’s Place has resettled refugees from Ukraine, Russia, Syria, Iran, Iraq, Congo, Cuba, Burundi, Nepal and Myanmar (Burma), as well as such U.S. citizens as Puerto Ricans whose lives were upended by hurricanes. When it has surplus items, Saint’s Place shares them with a score of area agencies that serve such groups as veterans, domestic violence victims and hospital patients, Miller added.

When an agency like Catholic Charities Family & Community Services finds an apartment for a refugee family, Saint’s Place goes into action, Miller said.

“The minute we know the apartment is ready we send a complete setup,” she said, noting Saint’s Place provides everything from clothes to curtains, kitchenware to toiletries and assists refugees in furnishing their new domiciles.

Saint’s Place also helps refugees with their educational and social needs. Children are gifted with backpacks filled with school supplies, and tutoring for them as well as adults is available. Refugees often need help filling out job applications or enrolling in various educational programs, she said, adding that many refugees often were well-educated in their homelands and simply need assistance to get a leg up in this country.

Like every social service agency, Saint’s Place has felt the effect of rising prices in recent months, Miller said, noting the cost of new beds has doubled in two years. Nonetheless, her agency — which receives no federal or state funding — hopes Catholics and others in the Diocese of Rochester continue to support Saints Place.

“Saint’s Place prevails because of the generosity of the people in the Rochester community and our wonderful, loyal donors,” Miller said. “They truly believe in our mission of ‘Welcoming the Stranger.’ At the end of every day, we know in our hearts that we have made a difference in the lives of the refugees.”