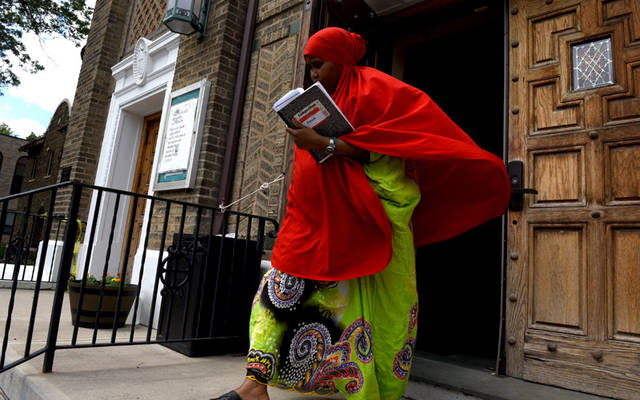 A women steps out of Mary’s Place Refugee Outreach in Rochester in 2016. (Courier file photo)

Charlsey Bickett was overjoyed when she learned in late November that Mary’s Place Refugee Outreach had been awarded a Hunger Relief Grant from Catholic Family Center.

Mary’s Place supports refugees as they work to adjust to American culture, learn English, find jobs and seek to attain permanent residency and citizenship. Over the last few months Bickett had noticed an increasing number of refugee families requiring emergency assistance in order to put food on their tables.

“We kind of always expect to have people who come in with food emergencies, but that has increased so much with COVID, because we’ve had so many families who unfortunately have lost jobs or had their hours cut significantly,” Bickett said.

In recent years, Mary’s Place has used its Hunger Relief Grant funding to help these families with food emergencies. These grants are distributed by Catholic Family Center in Rochester and funded by the annual Catholic Courier/Catholic Charities Christmas Appeal in conjunction with the Lenten Rice Bowl campaign. Now in its 51st year, the Christmas Appeal raises money for the emergency funds of various Catholic Charities agencies, affiliated agencies and ministries throughout the Diocese of Rochester.

The day after Mary’s Place received its $2,171 grant, the ministry purchased a number of gift cards from the Price Rite grocery store located near the ministry’s headquarters on Lexington Avenue in the former Holy Rosary rectory. The outreach offers a regular distribution of food from Foodlink, but the gift cards come in handy when a family’s need for food arises suddenly, as was the case for many refugee families last March.

Many of these families’ children had received a free lunch at school every weekday that school was in session, but this resource disappeared when schools closed suddenly last spring due to the pandemic, Bickett noted. Families, many of which were just getting by as it was, now had to purchase more food than usual in order to feed their families.

“Parents didn’t suddenly start making more money because their kids are doing remote learning now,” Bickett explained. “Yes, there are a lot of places that are doing the daily free lunch pickups, but for some of our families, it’s just logistically really difficult to do that. If you’ve got eight kids ‚Ä¶ the idea of trying to get all eight kids out of the house every day to walk a mile down the street to the place that’s giving out the lunch, how do you do that, especially when the kids are doing virtual learning or you’re working?”

The pandemic also indirectly led to a temporary loss of benefits for some families, Bickett said. Many of the refugees are just learning to speak English, and others, especially single mothers, may never have known how to read or write in their first languages, Bickett said. Mary’s Place offers both English-language classes as well as case-management services, but both were suspended when the pandemic forced the ministry to temporarily close last spring. Refugees could talk to their case workers over the phone but were not able to physically show legal documents, forms or notifications they received in the mail and were unable to read by themselves.

“Unfortunately, during the time that we were closed from March to June, we had some situations where we had families that were getting letters in the mail from (the Department of) Social Services telling them that they needed to recertify or update the cases, and they weren’t literate, couldn’t read it,” Bickett said.

Mary’s Place was able to provide Price Rite gift cards to these families so they could feed their families, thanks to their Hunger Relief Grant and the Christmas Appeal.

“It’s a relief just knowing that in a pinch, you can get someone a gift card to do their own shopping,” Bickett said. “It’s just a really dignified way of getting people that little bit of help so that they can feel in control in a situation that’s just so out of control.”