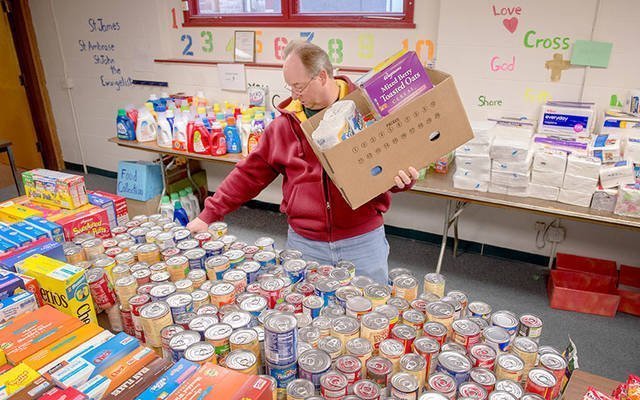 Mark Messmer loads a Christmas basket with supplies for a needy family at Rochester’s Peace of Christ Parish Dec. 12, 2015.

The annual Catholic Courier/Catholic Charities Christmas Appeal was established in the late 1960s, around the time then-Bishop Joseph L. Hogan began assigning priests to respond specifically to the needs of impoverished communities throughout the Diocese of Rochester.

One of the bellwethers of the Christmas Appeal’s continuing importance is the changing face of the clientele served by Catholic Charities’ agencies, Balinsky said.

“The people who used to be our volunteers are now our clients,” he said. “Things are much worse in the upstate economy.”

Conditions are worse in many places, Balinsky noted, due to the hurricanes, earthquakes and fires around the country, the Caribbean and Mexico. So, he hopes potential donors will not suffer from “donor fatigue,” given the many fundraisers that have taken place to help provide relief to those areas.

“We need help at home too,” he added.

“All of our hearts are touched by the devastation experienced by residents of Texas, Florida, Puerto Rico, California, Mexico, and other areas affected by these recent disasters,” observed Karen Franz, general manager/editor of the Catholic Courier.

“We want to reach out and help the the victims of these events, as well we should,” she said. “But the media spotlight on their losses can blind us to the perhaps more mundane but nevertheless very real poverty and suffering experienced every day by those living next door to us. So we hope donors will remember that the needs of local people do not go away simply because of crises occurring elsewhere.”

For 48 years the Christmas Appeal has been helping such neighbors who find themselves in short-term financial crises, through proceeds that are directed to the emergency funds of Catholic Charities offices and affiliated agencies. The 2017-18 appeal, which has a goal of $45,000, begins at Thanksgiving and runs through the end of February. The Catholic Courier and El Mensajero Cat√≥lico promote and administer the campaign as a public service, meaning Catholic Charities agencies receive 100 percent of donations received, less the modest cost of printing and mailing reminders to those who have donated in prior years, Franz said.

Additionally, appeal funds serve the rural communities that sometimes are overshadowed by discussions about the extreme poverty in the City of Rochester, he said. Analysis by the Rochester Area Community Foundation’s ACT Rochester found Rochester is the fourth-poorest city among the top 75 metropolitan areas in the country, Balinsky noted.

“Rural poverty is also an incredibly important issue,” he said, citing the Food Bank of the Southern Tier’s 168 food banks as an example. “Numerous people are coming in telling staff that they are living in their cars.”

Donations — of any amount — are welcomed, Balinsky said. Donations by check may be made payable to Christmas Appeal and sent to the Catholic Courier, PO Box 24379, Rochester, NY 14624. Please include your name, address, city, state, ZIP code, telephone number, and whether the gift is being made in honor or memory of someone.

Donations also may be made to the appeal on Nov. 28 through ROC the Day, an annual 24-hour communitywide fundraiser, by visiting http://bit.ly/2hLlnnN.