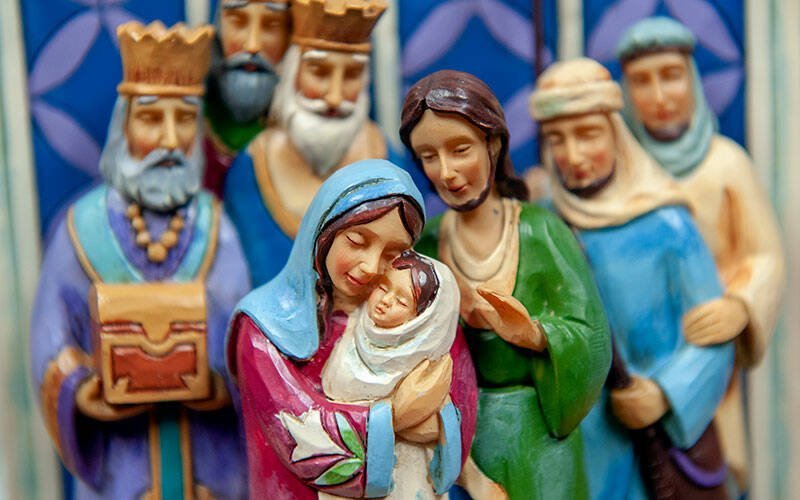 The Holy Family is depicted in a Christmas creche. (Courier file photo)

EDITOR’S NOTE: This is the first installment of the Catholic Courier’s new feature series “Why Do Catholics … ?” which aims to answer questions about what Catholics do and believe.

Each year in the weeks before Christmas, Catholic families around the globe share in the time-honored tradition of setting up the Christmas creche. In extravagant and modest homes alike, creches — or Nativity scenes — are taken out of storage, their figures gently unwrapped, and Mary, Joseph and the baby Jesus carefully positioned near the manger or crib.

Some creches feature only the Holy Family — Mary, Joseph and the infant Jesus. Others include sheep, shepherds, camels, Magi, angels and sometimes a menagerie of other animals. Father Gary Tyman, who collects creches from around the world, has one that includes a giraffe, an elephant and an ostrich.

Many creches are carved or framed from wood or fired in ceramic, but some of the creches in Father Tyman’s collection were fashioned out of corn husks, bottle brushes, burlap and dowels. The creators of these scenes used whatever materials were available to them, and were amazingly creative, he noted.

Regardless of creches’ diversity in characters, artistry and fabrication, they all tell the same story, he said.

“To me, seeing the different creches, expresses the sense that God can be born in any time, in any culture, among any people,” said Father Tyman, pastor at Our Lady of Lourdes and St. Anne parishes in Brighton and Rochester. “It speaks to us of the Incarnation, God becoming one of us.”

The practice of displaying a Nativity scene is not an exclusively Catholic custom; it is shared by many Protestants as well. The roots of the scene itself come from the Gospel accounts of Jesus’ birth, but St. Francis of Assisi is credited with setting up the first known living Nativity scene in the Italian town of Greccio in 1223, according to Admirabile Signum, Pope Francis’ 2019 apostolic letter on the meaning and importance of the Nativity scene.

“All those present experienced a new and indescribable joy in the presence of the Christmas scene. The priest then solemnly celebrated the Eucharist over the manger, showing the bond between the Incarnation of the Son of God and the Eucharist,” Pope Francis wrote.

The Christmas creche arouses wonder in those who gaze upon it because it shows God loves us so much that he “lowered himself to take up our littleness,” according to Pope Francis.

“Setting up the Christmas creche in our homes helps us to relive the history of what took place in Bethlehem,” Pope Francis wrote. “Naturally, the Gospels remain our source for understanding and reflecting on that event. At the same time, its portrayal in the creche helps us to imagine the scene. It touches our hearts and makes us enter into salvation history as contemporaries of an event that is living and real in a broad gamut of historical and cultural contexts. In a particular way, … the Nativity scene has invited us to ‘feel’ and ‘touch’ the poverty that God’s Son took upon himself in the Incarnation.”

Some specific practices related to the Christmas creche also help the faithful to enter into the Gospel story, noted Father Tyman. For example, many Catholics leave the three Wise Men or Magi — and any accompanying camels or other creatures — apart from the rest of the scene until Jan. 6, the feast of the Epiphany. Some people bring them toward the creche bit by bit over the course of several days, Father Tyman said.

“We have done a bit of that in our churches, starting them off at some point removed from the creche itself and then gradually bringing them there,” he remarked.

Another common practice is reserving the figure of the infant Jesus from the manger until Christmas, or at least until after the vigil Mass has ended on Christmas Eve. This practice is observed at St. Anne and Our Lady of Lourdes, and Father Tyman also witnessed it in Assisi when he attended midnight Mass at the Basilica of St. Francis one Christmas in the mid-1980s.

“They did it there with a great deal of drama and show, at midnight producing the image of the child and placing it in the creche,” Father Tyman recalled.

The practice of withholding the baby Jesus until Christmas reinforces the sense of waiting, longing and anticipation that characterize the Advent season, he said.

Regardless of when Jesus and the Magi arrive upon the scene, Nativity scenes are attractive to children, drawing them in and helping to teach them about the faith, Father Tyman added, noting that creches also bring a sense of nostalgia to many adults.

“Standing before the Christmas creche, we are reminded of the time when we were children, eagerly waiting to set it up,” Pope Francis wrote in his apostolic letter. “These memories make us all the more conscious of the precious gift received from those who passed on the faith to us. At the same time, they remind us of our duty to share this experience with our children and our grandchildren.”