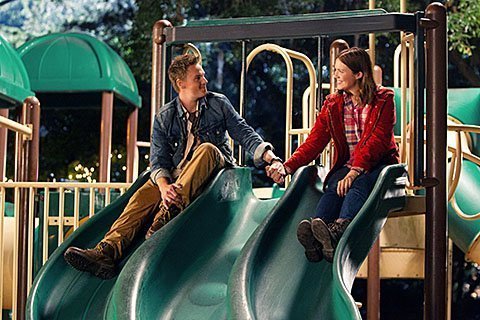 Riley Smith and Mandy Moore star in a scene from the "Hallmark Hall of Fame” presentation of "Christmas in Conway," which airs on ABC Sunday, Dec. 1, 9-11 p.m. EST.

NEW YORK (CNS) — Tragic events can take on added poignancy when they unfold against the backdrop of a holiday. And so it proves for the characters in “Christmas in Conway.”

Andy Garcia and Mary-Louise Parker star as happily married Duncan and Suzy Mayor. Though their lives have recently been overshadowed by Suzy’s terminal illness — as the action opens, she returns from the hospital to live out her final days at home — Duncan and Suzy remain deeply in love and thoroughly committed to each other.

As Suzy’s hospice-care nurse, Natalie Stringer (Mandy Moore), has the opportunity to observe, the spouses are well matched. In particular, Suzy’s gentle patience goes a long way toward smoothing Duncan’s rough edges, which are all the more abrasively on display as he struggles to come to terms with his impending loss.

Still, Duncan is a romantic at heart. So, when Suzy recalls nostalgically how happy she was riding the amusement-park Ferris wheel on which Duncan proposed to her, he determines to give her the opportunity to relive the experience.

Since Suzy is too sick to travel to the original ride, however, Duncan is forced to resort to more elaborate measures. He eventually hatches a plan that puts him in conflict with his picturesque hometown’s zoning laws — and with his busybody neighbor Gayle (Cheri Oteri) who’s intent on enforcing them.

In addition to its portrait of a successful marriage, “Christmas in Conway” also promotes forgiveness through the backstory of local landscaper Tommy Harris (Riley Smith).

An admiring former student of Suzy’s from her days teaching high school, Tommy is anxious to help Duncan complete his project. But to do so, Tommy must overcome the lingering suspicions of him Duncan harbors based on a potentially life-altering mistake Tommy made while still a teenager.

Fortunately for the romantic aspect of the story, Tommy faces far less formidable odds in his efforts to win Natalie’s approval.

Directed by John Kent Harrison from a script by Stephen P. Lindsey and Luis Ugaz, “Christmas in Conway” obviously deals with a somber topic that would be too upsetting for the smallest viewers. And a brief scene of very mild marital sensuality — Duncan wants to ensure that Suzy’s newly installed hospital bed has room for him — could be slightly problematic for them as well.

Teens and their elders, however, will find the film a source of morally well-rooted and uplifting entertainment. Their appreciation of it, moreover, will only be deepened by the fact that the movie models traditional marriage in a thoroughly positive way, even as that cornerstone social institution comes under relentless attack in other cultural arenas.