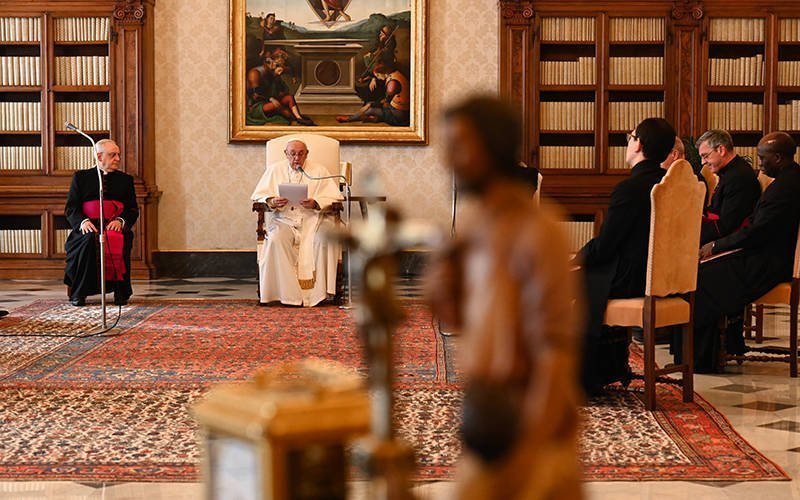 Pope Francis leads his general audience in the library of the Apostolic Palace at the Vatican March 31, 2021. The pope reflected on the Easter triduum and the hope Christ’s passion, death and resurrection brings in uncertain times. (CNS photo by Vatican Media)

During his weekly general audience March 31, the pope said that as Christians prepare to celebrate another Easter in the shadow of the COVID-19 pandemic, the hope brought by Christ’s cross “is like a beacon that indicates the port to ships that are still afloat on stormy seas.”

“It is a sign of the hope that does not let us down, and it tells us that not even one tear, not one cry is lost in God’s plan,” he said.

Pope Francis used his weekly general audience to reflect on each day of the triduum, beginning with Holy Thursday when Christians “relive what happened at the Last Supper.”

The Eucharist, he said, is a testament of Jesus’ love for humankind; the Lord left it for Christians “not as a remembrance, but as a memorial, as his everlasting presence.”

“In this sacrament, Jesus replaced the sacrificial victim with himself,” the pope said. “His body and blood give us salvation from the slavery of sin and death.”

Good Friday, he continued, is a “day of penance, fasting and prayer” that helps Christians feel as if they “were gathered on Calvary to commemorate the passion and the redemptive death of Jesus Christ.”

Through the adoration of the cross, he said, Christians not only “relive the journey of the innocent lamb sacrificed for our salvation” but also remember the suffering of today’s “‘sacrificed lambs,’ the innocent victims of wars, dictatorships, everyday violence, (and) abortion.”

“Before the image of the crucified God, we will bring in prayer the many, the too many, who are crucified in our time, who can receive only from him the comfort and meaning of their suffering,” he said.

Departing from his prepared remarks, Pope Francis said the light of God’s love is needed because “the world is in darkness.”

“Let us make a list of all the wars that are being fought right now, of all the children who are dying of hunger, of the children who have no education, of entire peoples destroyed by wars, by terrorism, of the many, many people who, in order to feel a little better, need drugs, the drug industry that kills. It is a calamity, it is a desert,” he said.

Continuing his reflection, the pope said Holy Saturday is a day of silence in which those who had hoped in Christ “are put to the test” and “feel like orphans.”

Nevertheless, he said, Christians should look to Mary who, after following her son “along the sorrowful path,” maintained hope “in the promise of God who raises the dead.”

“Thus, in the darkest hour of the world, she became the mother of believers, the mother of the church and a sign of hope,” the pope said. “Her witness and her intercession sustain us when the weight of the cross becomes too heavy for us.”

Pope Francis said the darkness of Holy Saturday is broken by the light and joy of Easter when “all questions and uncertainties, hesitations and fears are dispelled” by Christ’s resurrection.

“The Risen One gives us the certainty that good always triumphs over evil, that life always conquers death and that our end is not to descend lower and lower, from sadness to sadness, but to rise to the heights,” the pope said.