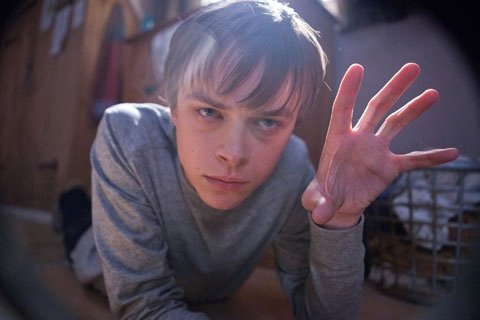 NEW YORK (CNS) — "Quis ut Deus?" This Latin motto, traditionally associated with St. Michael the Archangel (whose Hebrew name itself has a similar meaning), translates as "Who is like God?" That question could serve as the tagline for the reasonably original, curiously dark "Chronicle" (Fox), an exploration of the troubling results that ensue when mere mortals obtain godlike powers.

Stumbling on a mysterious object, a trio of teens — social outcast Andrew (Dane DeHaan), his duffle-coated, philosophy-mumbling cousin Matt (Alex Russell), and their smooth, more socially accomplished acquaintance Steve (Michael B. Jordan) — find themselves endowed with telekinesis and the ability to fly.

Initially, the boys do no more with their newfound gifts than goof around and play pranks. However, darker emotions and more serious consequences soon come to the fore. Andrew, for instance, is struggling to cope with an alcoholic father (Michael Kelly) and a dying mother (Bo Petersen).

Director Josh Trank conveys all of this in the pseudo-found footage style of "The Blair Witch Project." Though that conceit feels, by now, more than a little overused, it nonetheless contributes to an atmosphere of realism. It also lends urgency to the moral debates in which the principals engage — which for viewers of faith will likely represent the main appeal of "Chronicle."

This isn’t, after all, far-off Oa — the fictional planet that serves as headquarters for DC Comics’ Green Lanterns — it’s Seattle. And those struggling with the responsibilities of power are not caped crusaders, but high school boys still stumbling their way through conversations with the opposite sex.

Likewise, the adversaries these characters confront are not cartoonish villains but such widespread preoccupations as abusive parents, relatives in pain, high medical costs and friends lost to death.

Equally realistic, no doubt, is the vulgarity with which screenwriter Max Landis has freighted the youthful dialogue. Those adult viewers, however, willing to listen past the surfeit of S-words for the scripturally congruent message underlying them may consider themselves sufficiently rewarded by a morally engaged — if not universally engaging — piece of moviemaking.

The film contains limited action violence, scenes of physical abuse, an implied premarital encounter, a scattering of profanity, at least one rough term, pervasive crude language and an obscene gesture. The Catholic News Service classification is A-III — adults. The Motion Picture Association of America rating is PG-13 — parents strongly cautioned. Some material may be inappropriate for children under 13.