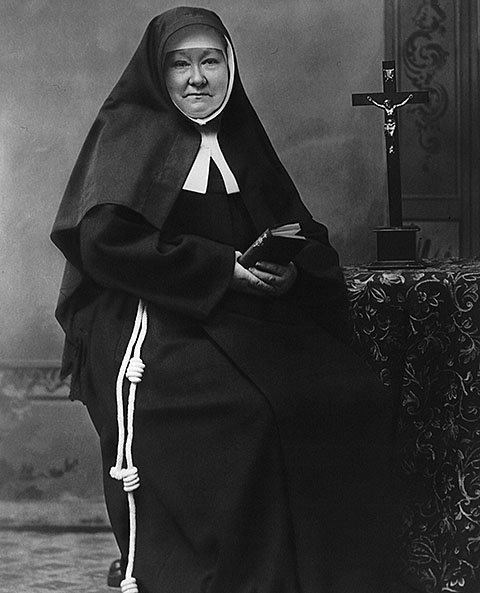 Mother Theresia Bonzel, foundress of the Sisters of St. Francis of Perpetual Adoration, will be beatified in November in Paderborn, Germany, according to the order's Colorado Springs motherhouse. She is pictured in an undated portrait.

PADERBORN, Germany (CNS) — A Catholic nun who was born into a poor rural family and founded a religious order has been beatified in her native Germany more than a century after her death.

"It is written in the Bible that love of neighbor is linked inseparably to love of God," Archbishop Hans-Josef Becker of Paderborn said at the Nov. 10 beatification of Mother Maria Theresia Bonzel.

"We can see here a woman who put this nonrenounceable relationship into practice in an exemplary, ideal manner through her life. For this reason, she has been raised to the altars."

Cardinal Angelo Amato, prefect of the Vatican’s Congregation for Saints’ Causes, celebrated the Mass in the city’s cathedral. Bishop Kevin C. Rhoades of Fort Wayne-South Bend, Ind., was a concelebrant; the order has houses and operates a university in his diocese.

Archbishop Becker said love of neighbor was generally considered a "core Christian message" and reflected the "indestructible dignity and value of human life" enshrined in Germany’s constitution, or Basic Law.

However, he added that support for abortion, euthanasia and human genome manipulation suggested human dignity was often viewed as "insignificant and uninteresting," and he said Blessed Maria Theresia’s life offered a "vivid message" that "only those who love God with their whole heart can interact fully with other people without making them an instrument of their own self-assertion."

"We talk a lot in the church — but mostly to each other, and rarely with or about God," the archbishop said. "Given the present church’s many polarizations, we should recognize the remarkable advice offered by her life witness: Do not lose track by disputing whether love of God or neighbor, piety or charity, should take priority."

Born Regina Christine Wilhelmine Sept. 17, 1830, in what is now Olpe, Germany, she was sent to a Cologne school run by Ursuline nuns and became a Franciscan tertiary, aged 20, taking the name Maria Theresia.

In 1857, she became local head of Germany’s Association of Women and Girls for Helping the Poor, setting up the first house of what would become a new order, with two friends, in 1859.

In July 1863, the Sisters of St. Francis of Perpetual Adoration were approved by the local bishop; their mission was to care for children while adoring Christ in the Blessed Sacrament.

Blessed Maria Theresia became first mother superior in 1865; and by her death on Feb. 6, 1905, the 1,500-strong order had 73 communities in Germany and 49 in North America, which she visited three times.

In February 1999, a miracle was attributed to her intercession: the recovery of a 4-year-old, Luke Burgie, from a gastro-intestinal problem in Colorado Springs, Colo.

Sister Anita Holzmer, one of 48 American order members attending the beatification, told Today’s Catholic, newspaper of Fort Wayne-South Bend Diocese, that the Mass was "especially poignant" for nuns from the province in the Philippines, which was battered by Typhoon Haiyan two days earlier.

The president of the order’s University of St. Francis in Fort Wayne, Sister Elise Kriss, said the Mass "truly gave us a sense of the international nature of our congregation."

"We became aware that our charism of perpetual adoration is actually taking place somewhere in the world every hour of the day and night," she said.