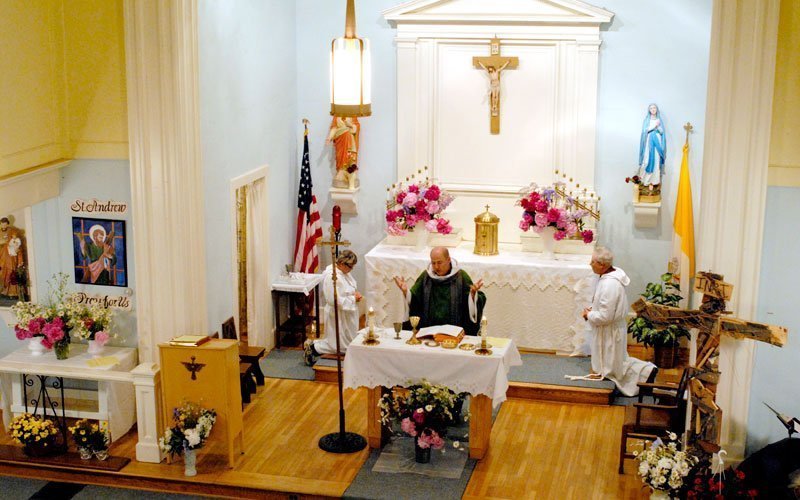 According to Sister of St. Joseph Anne Alderman, arriving for Mass at St. Andrew Church in Dundee was something like walking into Cheers, the bar featured in the 1980s television series of the same name.

Obviously, the church bore no resemblance to a bar, but when you walked into St. Andrew, everybody knew your name and was happy to see you, said Sister Alderman, director of Cobblestone Springs spirituality and renewal center in Dundee.

“There’s only one Mass on a weekend, so everyone’s there and you miss people when they’re not there,” Sister Alderman said.

All that changed June 28 with St. Andrew’s closing Mass and final liturgy.

The church had been a part of Our Lady of the Lakes Catholic Community, which also comprises churches in Penn Yan, Naples, Prattsburgh, Stanley and Rushville. Through the diocesan pastoral-planning process, diocesan and parish representatives decided to close St. Andrew, largely because of the ongoing priest shortage, said Father Robert Ring, pastor, and Karen Rinefierd, diocesan pastoral-planning liaison.

Early in the pastoral-planning process, Bishop Matthew H. Clark asked Our Lady of the Lakes’ planning team “to develop a plan that accommodates the assignment of two full-time priests no later than June 2009,” according to the community’s 2006 pastoral plan. According to Father Ring, the plan also calls for Our Lady of the Lakes eventually to maintain for worship and ministry only three sites: St. Michael in Penn Yan, St. Januarius in Naples and St. Theresa in Stanley.

The decision to close St. Andrew, in particular, also was fueled by consistently small attendance and by financial issues, Father Ring said.

“The people were aware of questions about their viability and how long they’d be able to stay open even before the planning process began,” he said.

Nonetheless, the decision to close wasn’t easy, and many in the St. Andrew community are feeling a tremendous sadness, he noted. At the same time, he said the parishioners he’s talked to seem to agree that St. Andrew’s closure is necessary and is the right thing to do.

“On the other hand, I have to say I think there is a degree of acceptance around it. They basically felt we probably should move forward,” Father Ring said. “If you know this eventually is going to happen and it’s been discussed at length many times, there reaches a point when it’s more emotionally draining to keep going than to say it’s time to move on.”

Such sentiments are not shared by all parishioners, however. Judy McCullough said she understands there’s a priest shortage and that St. Andrew wasn’t as financially viable as large churches. Still, she said the church has been such a valuable asset in the Dundee community that she thinks it should have been preserved.

“I’m having a problem coming to grips with why they would close something that was a real value to the community,” McCullough said.

Strong fellowship was one of the trademarks of the St. Andrew community, she said.

“It’s a feeling of family as soon as you come in,” McCullough observed.

Indeed, walking into the church for Saturday Mass was sort of like walking into a big family reunion, remarked fellow parishioner Charles Frost. Parishioners visited together before Mass and shared stories about what was going on in their lives, whether good or bad, he said.

“When you get older there’s always something going on,” he said with a chuckle.

“It’s just been a wonderful experience having a close family like that,” added fellow parishioner Phyllis Maciag. “I’m going to miss it terribly. It’s like losing a member of your family.”

Even though St. Andrew’s parishioners were a tight-knit community, they also were quick to welcome others, said Sister Alderman, who joined the parish about 12 years ago and has called it home ever since.

“They were very welcoming right from the beginning. Many are people who have been in the parish all their lives. They know each other well, and they’ve welcomed us into the family,” Sister Alderman said.

Part of St. Andrew will live on in Our Lady of the Lakes, Father Ring said. Several years ago during Lent, St. Andrew parishioners constructed a cross out of random bits of wood from parishioners’ homes and yards. That cross will be displayed in one of the remaining worship sites, he said.

“It kind of has a piece of everybody’s home in it,” Father Ring said.

St. Andrew parishioners also are talking about setting up a phone tree and scheduling reunions to keep in touch, Sister Alderman said. Some parishioners might join St. Mary of the Lake in Watkins Glen or St. Stanislaus in Bradford, McCullough said. Others, however, are planning to worship together at St. Michael and “have a little St. Andrew’s in St. Michael Church.”

Nonetheless, Sister Alderman said it won’t be quite the same as walking into the warm, loving community that was St. Andrew.

“I’m going to miss that sense of everybody knowing your name.”