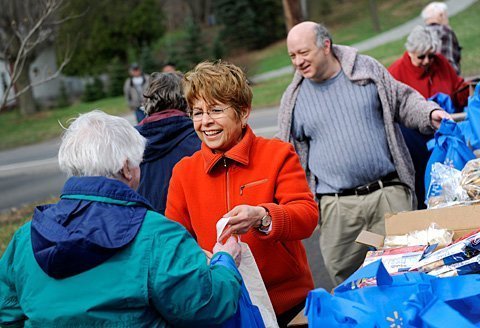 On April 18 a mobile food pantry from Food Bank of the Southern Tier visited Prattsburgh’s St. Patrick Church, where parishvolunteers served 122 families in need. Above, Tere Coombs (center) smiles as she helps distribute food during the visit.

Every third Thursday of the month a large beverage truck pulls into the parking lot of St. Patrick Church in Prattsburgh. The truck’s arrival prompts at least a dozen volunteers to spring into action, setting up tables in the parking lot, pulling hundreds of pounds of food from the truck and setting it out on the tables.

Within an hour, dozens of people are lined up and waiting to walk amongst the tables and take the food items they need from the Food Bank of the Southern Tier’s mobile food pantry.

"It’s a wonderful program. You can just tell by the amount of people that come that it’s very much needed," noted Sharon Peck, who attends St. Patrick Church and helps coordinate the church’s involvement with the program.

Food Bank of the Southern Tier launched the mobile food pantry program in 2007, noted Jennifer Edger, the food bank’s agency-services and community-programs manager. In 2012 alone, the program’s two converted beverage trucks distributed more than 2.8 million pounds of food — including 687,245 pounds of produce — at 575 distributions. St. Patrick Church, which belongs to Our Lady of the Lakes Catholic Community, began hosting the program in its parking lot in January.

In late 2012 someone at the local food pantry in Prattsburgh mentioned to Peck that Food Bank of the Southern Tier was looking for a church to host the mobile food pantry. St. Patrick Church had a brand-new paved parking lot, so it seemed like it might be a perfect site for the mobile pantry, Peck said. After a few discussions between parishioners and staff at the food bank, the church was signed up to host the mobile food pantry once a month for the duration of 2013.

When searching for host sites for the mobile food pantry, the food bank’s staff first tries to identify geographic areas, both rural and urban, that don’t have a lot of food pantries or soup kitchens, Edger said. Once such an underserved area has been identified, Edger then looks for a specific site to host the truck. An ideal host location has a flat, paved parking lot that’s big enough to hold the beverage truck as well as the tables of food and all the volunteers’ and participants’ vehicles, she said. Sometimes the food bank uses the parking lots of stores that have gone out of business or of fire halls, but the first preference usually is a church parking lot.

"We like to have the church community host the mobile food pantry when possible. (At churches) you have a group of volunteers that are ready to go. A lot of our churches that we work with have some retired folks that have a little time on their hands. They are geared towards service," Edger said.

That definitely was the case in Prattsburgh, she noted.

"In Prattsburgh it fulfilled a mission that the parish had. They were really looking for some outreach opportunities and we were looking for a site in Prattsburgh, so it’s like it was meant to be. It was perfect timing," she added.

St. Patrick parishioners have eagerly embraced this new outreach opportunity, agreed parishioner Conrad Tunney, recalling the January day when he and his wife volunteered with the food distribution.

"It was freezing cold, there was snow on the ground, and 18 volunteers showed up," he marvelled. "The spirit there is unbelievable."

Plenty of volunteers signed up to help with the food distribution in the following months, Peck said. One local business owner even closes her shop for the morning so she can help with the distribution, she added.

Volunteers served 72 people in January, but each month that number has grown as word has spread about the mobile food pantry’s monthly presence in Prattsburgh, Peck said. In March, for example, more than 100 people came to St. Patrick’s parking lot to receive free food.

Most of the food distributed from the mobile food pantry comes from Food Bank of the Southern Tier’s corporate partners, including Walmart, Target, Wegmans and CVS, while some comes from the federal government, Edger said. People coming to receive food do not have to meet any income or geographic requirements, she added. They do have to sign in and write down the number of adults, children and senior citizens in their households. They also have to provide a phone number where they can be reached in the case of a food recall, Edger said.

The food bank’s staff decided not to hold participants to income requirements because many people who do not qualify for food stamps or other forms of assistance still have a hard time affording groceries, Edger said. In Steuben County, where Prattsburgh is located, there are quite a few people who’ve just recently lost their jobs, so on paper it looks like they have more money than they actually do, she said.

"We’re really trying to break down the barriers for folks who are in need," she said.