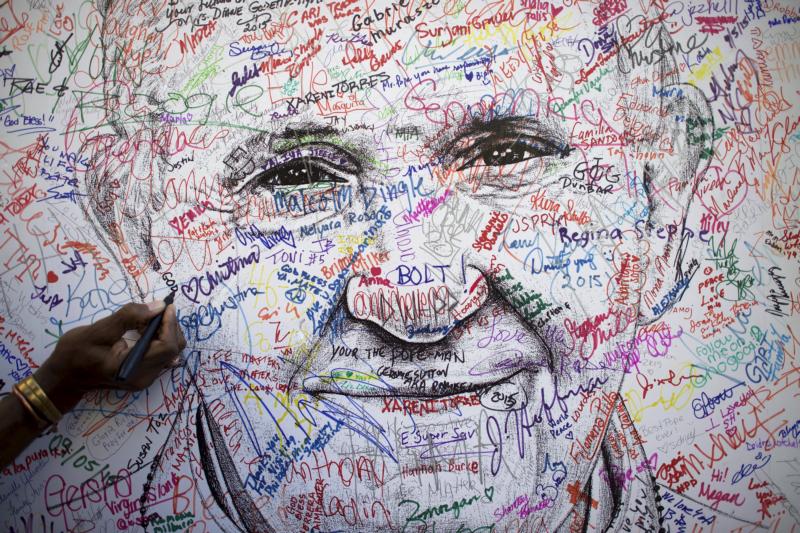 A delegate to the 2015 World Meeting of Families signs a poster drawing of Pope Francis by artist Mark Gaines Sept. 23 in Philadelphia. More than 17,500 participants from more than 100 countries registered for the four-day congress. Those numbers are expected to swell when Pope Francis joins the event Sept. 26-27.

PHILADELPHIA (CNS) –Known as the City of Brotherly Love, Philadelphia will be "the city of family love" and the "world capital of families" during the four-day World Meeting of Families, said Archbishop Vincenzo Paglia, president of the Pontifical Council for the Family.

The largest-ever World Meeting of Families opened in Philadelphia Sept. 22. More than 17,500 participants from more than 100 countries registered for the four-day congress, said Archbishop Charles J. Chaput of Philadelphia.

"All have come to affirm their commitment to the family as the foundation of a fruitful life," the archbishop told reporters at the Pennsylvania Convention Center Sept. 22.

The numbers are expected to swell to the tens of thousands for the major events with Pope Francis, Sept. 26-27, including the Festival of Families and an outdoor papal Mass. About 1,300 clerics will be available to distribute Communion to the faithful at the Mass.

The theme of the eighth international World Meeting of Families is "Love is Our Mission, The Family Fully Alive."

Dozens of speakers are expected to address issues that families face, such as raising children, dealing with grief, intimacy between spouses, caring for members with disabilities, and the role of grandparents, said Archbishop Chaput.

Archbishop Vincenzo Paglia said the World Meeting of Families comes just one week before the Synod of Bishops on the Family, set to begin in Rome Oct. 4, and "will doubtless have a great effect on the discussion in the synod."

In response to a question from the press on the upcoming synod, Archbishop Paglia said the family "is not understood through books but through encounter with real families. For this reason, Pope Francis wanted, in these past two years (before the synod), to have a very wide consultation."

"Because we do not need new definitions (of family)," he continued. "We need to understand how families live today, what their problems are, their hopes, and how we can help those that are healthy, and not so healthy, to be more of a family."

Archbishop Paglia said the World Meeting of Families communicates that the family is not just important for the church or for Christians, but for all people and cultures, which is why holding the meeting in a country that is not majority Catholic is important.

Christians do not marry or raise a family for personal satisfaction, he said.

"Christians build a family in order to transform … the world," he said.

When asked by a journalist if this concern of the church for families extended to same-sex parents, the archbishop replied, "You know, family is family." He said it is important to avoid confusing language and underlined the "link" that God created between man and woman.

"We have to underline the dignity of each person," he continued. "Each person is a saint because they are loved by God. But family is a man and a woman as God, at the beginning of creation, established, and we have to obey the holy Scriptures."

Archbishop Paglia and Archbishop Chaput later addressed hundreds of pilgrims at the official opening of the World Meeting of Families.

He said Pope Francis decreed that pilgrims to the World Meeting of Families could receive a plenary indulgence under the normal conditions.

The archbishop also mentioned during the news conference that his council compiled the catecheses on the family, which Pope Francis delivered this past year during his general audiences in Rome, and translated them into English and Spanish. The translations are available at the congress.

Later that day, two halls of the Pennsylvania Convention Center were transformed into an image of the Cathedral Basilica of SS. Peter and Paul, located about six blocks away, for the meeting’s opening Mass.

Archbishop Chaput was the main celebrant, and more than 95 bishops and archbishops, plus five cardinals, concelebrated.

Msgr. Joseph McLoone, pastor of St. Joseph Parish in Downingtown and coordinator for volunteers at the Mass, estimated that more than 600 priests and some 10,000 people were present.

Archbishop Chaput began his homily with an explanation.

"When I was a newly ordained priest 45 years ago, many of us often felt free to find readings that matched what we wanted to say for a special occasion," the archbishop said. "As I got older — and I hope, wiser — I decided that what I did was wrong, and that I should be faithful to the word of God as the church gives us, and I feel compelled to preach on the word that God has given us today."

Referring to the day’s Old Testament reading from Ezra, Archbishop Chaput noted that it comes at a pivotal moment in the Israelites’ history: "Ezra was written about 420 years before the birth of Christ, at a time when the people of Israel are returning from the Babylonian exile to the Holy Land. There, they face two dangers — and they’re very much the same dangers that we face today as well.

Emphasizing that the modern world has its own manifestations of these two dangers, Archbishop Chaput urged those gathered to "learn from the example of Jesus and how to avoid those temptations."

He also said the church "is first the church of the home — the church of Mom and Dad — and we are taught how to love one another through the family." But in the day’s Gospel reading — Chapter 8, verses 19 to 21, of St. Luke’s Gospel — Jesus seems to say that there is "something more important than family life," he said.

Family ties are important, of course, but in the kingdom of God, "human ties of affection come secondary to faithfulness to the love of God," and we should love God and his commandments with "all our minds and all our strength and all we have first," the archbishop said.

Contributing to this story was M.J. Nevadomski in Philadelphia.