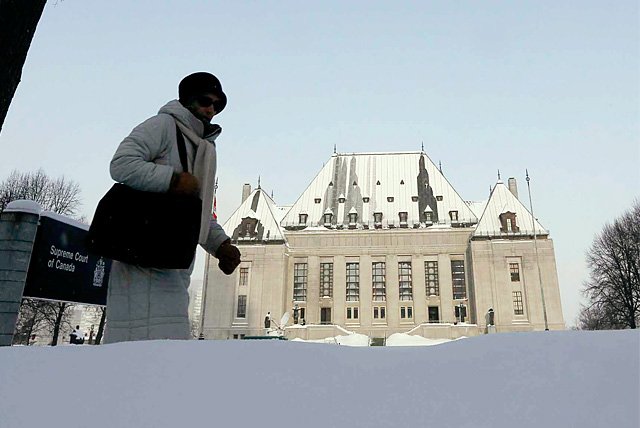 A woman walks past the Supreme Court of Canada in Ottawa Feb. 6.

OTTAWA, Ontario (CNS) — Canadian church leaders and advocates for the disabled reacted with dismay when the Supreme Court of Canada struck down laws against physician-assisted suicide.

In a unanimous decision Feb. 6, the court ruled that doctors may help adults with severe and incurable conditions to die, overturning a 1993 ban against assisted suicide.

Archbishop Paul-Andre Durocher of Gatineau, Quebec, president of the Canadian Conference of Catholic Bishops, noted that "Catholics are called by their faith to assist all those in need, particularly the poor, the suffering and the dying."

"Helping someone commit suicide, however, is neither an act of justice or mercy, nor is it part of palliative care. The decision of the Supreme Court of Canada today does not change Catholic teaching," he said.

Archbishop J. Michael Miller of Vancouver, British Columbia, said he was "deeply troubled by the court’s decision to overturn the law," and he urged Catholics "to join with other advocates for vulnerable persons to respond with urgency."

"Until today, Canadian legislation has been designed to protect those inclined toward ending their lives. That protection has now been eliminated," he said.

The archbishop said many people want assisted suicide because of the lack of adequate palliative care.

"In order to provide hope for those who suffer, we call on all levels of government, the healing professions, and hospitals and care facilities to ensure truly equal and inclusive access to such care. We have the technology to control pain, and we have the ability to overcome loneliness and despair," he said.

The Court ruled that two articles of Canada’s Criminal Code violate the Canadian Charter of Rights and Freedoms, the first part of the constitution. The federal and provincial governments of Canada have a year to adapt their laws to the ruling.

In Quebec, where a provincial assisted-suicide bill was passed in June, the Assembly of Quebec Bishops reiterated its stance that "euthanasia, even legalized, goes against the dignity of life and people."

"Today’s decision by the Canadian Supreme Court does not change anything to this conviction and encourages us to double our efforts to promote palliative care and to insist that it may become available for everyone, in every region," said the statement signed by Bishop Andre Rivest of Chicoutimi, vice president of the assembly.

"Our society will now have to answer the challenge of respect and liberty of conscience," said the statement, which encouraged medical staff to invoke their right to conscientious objection.

Although Quebec’s bishops opposed the provincial assisted-suicide law, it had popular support and received the approval of all political parties and was actually considered an example of rare and efficient political cooperation among parties.

The day of the federal ruling, Michele Boulva, head of the Catholic Organization for Life and Family, said the decision "is giving some of us permission to kill. We cannot overstate the gravity of the situation."

Other churches also opposed the ruling. Bruce Clemenger, president of the Evangelical Fellowship of Canada, said the country had "crossed a threshold by opening the door to assisted-suicide and voluntary euthanasia."

"By including the ‘administration of medication’ in its definition of physician-assisted death, the court has decriminalized not only assisted-suicide (defined as a person killing himself) but also voluntary euthanasia, in which medical professionals do the actual killing," the fellowship said in a statement.

In the lobby of the Supreme Court of Canada, Taylor Hyatt, media representative for the Euthanasia Prevention Coalition, said the ruling "specified that people with disabilities who believe their conditions to be nonterminal and insufferable could request assistance in ending their life."

"That means me," said Hyatt, who has cerebral palsy that affects her mobility. She called the decision "the ultimate example of the double-standard presented between the able-bodied and disabled population."

Contributing to this story were Deborah Gyapong in Ottawa, Ontario, and Philippe Vaillancourt in Montreal.