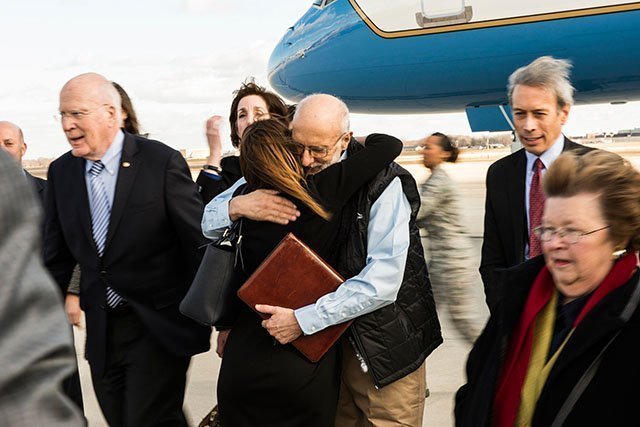 U.S. citizen Alan Gross embraces an entourage of family and friends who were awaiting his return from five years of captivity in Cuba to Andrews Field at Joint Base Andrews in Maryland Dec. 17.

WASHINGTON (CNS) — American church officials expressed optimism about plans by the United States and Cuba to normalize diplomatic relations and work toward reshaping how the two neighboring countries interact with each other.

The chairman of the U.S. bishops’ Committee on International Justice and Peace said he hoped the effort would "foster dialogue, reconciliation, trade, cooperation and contact between our respective nations and citizens."

Bishop Oscar Cantu of Las Cruces, New Mexico, said in a Dec. 17 statement that he also was overjoyed by the release of Alan Gross, an American contractor for the U.S. Agency for International Development, who has been incarcerated in Cuba for five years.

Pope Francis was involved in bringing the two countries together, personally appealing to Obama and Castro to put aside their differences and work toward the release of Gross and other prisoners.

The two nations also agreed to an exchange of prisoners. The U.S. agreed to release three Cubans imprisoned since 2001 since being convicted on murder and espionage counts; in return Cuba released a Cuban who had been held for nearly 20 years after being accused of providing key intelligence information to the U.S.

Bishop Cantu said the U.S. Conference of Catholic Bishops "has long held that universal human rights will be strengthened through more engagement between the Cuban and American people. For decades, the USCCB has called for the restoration of diplomatic relations between our nations."

Bishop Cantu also welcomed the announcement by Obama that Cuba’s designation as a state sponsor of terrorism would be reviewed by the U.S. Department of State.

"Engagement is the part to support change in Cuba and to empower the Cuban people in their quest for democracy, human rights and religious liberty," he added.

Archbishop Thomas G. Wenski of Miami released a statement in which he described the news as a "game changer" and welcomed the work of Pope Francis in encouraging the two countries together to settle their long-standing differences.

"Pope Francis did what popes are supposed to do: build bridges and promote peace," he said.

Archbishop Wenski also said the Catholic Church has long opposed the economic embargo the U.S. has imposed on Cuba for decades, calling it "a blunt instrument that hurt the innocent more than the guilty."

"We have consistently advocated that the U.S. should revise this policy, in the hope that engagement and dialogue would prove more helpful in improving conditions in Cuba than a policy of confrontation and isolation," he said.

The archbishop also expressed hope that Castro appeared to tell the Cuban people in a brief address to his nation Dec. 17 that the government was open to discussing democracy and human rights issues with the U.S.

"Progress in this area is normally the result, and not the precondition, of such talks and so the prospect of such talks is a positive development. As President Obama said, to seek the collapse of Cuba is not sound policy. Cuba needs change," Archbishop Wenski said.

"As Cuba transitions through such changes, we all should encourage a soft landing, that is change that is peaceful and offers real hope for the Cuban people on both sides of the Florida straits," he said.

Obama also laid out plans to lift restrictions on travel to Cuba; review Cuba’s designation as a state sponsor of terrorism; allow the sale of telecommunications equipment to Cuba; lift embargoes on Cuban products in the U.S. and ease of financial restrictions between the two countries.

Despite support from the church leaders, three members of Congress were critical of plans by the U.S. to pursue closer ties with Cuba.

Sen. Marco Rubio, R-Florida, a Cuban-American who has been mentioned as a possible Republican presidential contender in 2016, said in interviews with news organizations that only the Cuban government will benefit from the new U.S. stance.

He said in an interview with CNBC that Congress would not vote to approve lifting the embargo or fund an embassy in Havana.

Rubio, a Catholic, also questioned the role of the pope in the talks when he met with reporters.

"I would also ask his holiness to take up the cause of freedom and democracy, which is critical for a free people, for a people to truly be free," he said. "I think the people of Cuba deserve the same chances to have democracy as the people of Argentina have had, where he comes from; as the people of Italy have, where he now lives.

"Obviously the Vatican’s its own state, but very nearby. My point is I hope that people with that sort of prestige on the world stage will take up the cause of freedom and democracy. The Cuban people are the only people in this hemisphere that have not been able to elect a leader in more than 55 or 60 years. That’s outrageous," he said.

"It is a fallacy that Cuba will reform just because the American President believes that if he extends his hand in peace that the Castro brothers suddenly will unclench their fists," he said in a statement. "A majority of democratic activists on the island, including many that I have met with, have been explicit that they want the U.S. to become open to Cuba only when there is reciprocal movement by the Castro government. They understand that the Castros will not accede to change in any other way.

Rep. Mario Diaz-Balart, R-Florida, who comes from a family active in politics before the revolution that brought Fidel Castro to power, criticized the prisoner swap. He pegged Obama as "the appeaser in chief, who is willing to provide unprecedented concessions to a brutal dictatorship that opposes U.S. interests at every opportunity."

In a press release, Diaz-Balart, said that establishing diplomatic relations and taking other steps to boost U.S.-Cuba ties would serve to "further embolden the Cuban dictatorship to continue brutalizing and oppressing its own people as well as other Anti-American dictatorship and terrorist organizations."