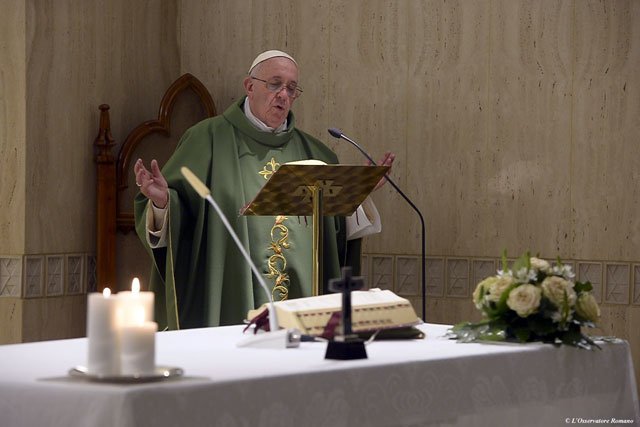 Pope Francis celebrates Mass in the chapel of the Domus Sanctae Marthae guesthouse at the Vatican Nov. 6.
By Carol Glatz
Catholic News Service
VATICAN CITY (CNS) — Christians are called to go out and serve others, not live a sheltered, comfortable life just serving themselves, Pope Francis said in a homily.
"When the church is lukewarm, closed up inside itself, even many times a wheeler-dealer," then that church is no longer one that "ministers, that serves, but rather uses others," he said at the Mass Nov. 6 in the chapel of his residence.
The pope’s homily, which centered on the day’s Gospel reading of Jesus’ Parable of the Unjust Steward, came the day after the official release of two books by Italian journalists detailing financial mismanagement within the Vatican.
In the parable, the corrupt manager squandered his master’s goods and shrewdly finagled some sweetheart deals for himself with his master’s debtors before he was kicked out of his job, according to the Gospel of St. Luke. The master, who is likely corrupt as well, even praises the disgraced servant "for acting prudently" and being so clever.
"These types even exist in the church, (people) who, instead of serving and looking out for others, of building foundations, they use the church: the climbers, the ones attached to money. And how many priests, bishops we have seen like this. It’s sad to say it, isn’t it?" the pope said.
Instead, Jesus and the Gospels call on people "to serve, to be at the service of, not to come to a halt, always to go further, forgetting about themselves," he said.
However, it’s so easy to be tempted to take advantage of the comforts that come with status and to start living "comfortably without honesty, like those Pharisees Jesus talks about, who stroll in the squares, making sure they are seen," the pope said.
On the other hand, he said, the day’s first reading from St. Paul’s Letter to the Romans shows what a disciple of Jesus is meant to do: be a minister of Christ and perform the priestly service of the Gospel so that the people may be "acceptable, sanctified by the Holy Spirit."
St. Paul could boast of what Christ accomplished through him, of being called to serve and inspired by the Holy Spirit, the pope said. "He never stopped in order to gain advantage of a position, an authority, to be served. He was a minister, a servant."
Pope Francis said he is filled with so much joy when nuns and priests tell him about their decades of humble service, for example, as a missionary in the Amazon or as health care providers in Africa or for the disabled. And they are "always smiling."
"This is called serving. This is the joy of the church: always to go further, to go further to give one’s life;" and this is the model religious men and women are called to live up to, he said.
He asked that people pray for the grace St. Paul received, to find honor in always journeying forth and rejecting many comforts.
He asked that God "save us from temptations," which in the end is the temptation to live "a double life: I show myself off as a minister, one who serves, but deep down, I use others."
Copyright © 2022 Catholic News Service, Inc. All rights reserved. Linking is encouraged, but republishing or redistributing, including by framing or similar means, without the publisher's prior written permission is prohibited.