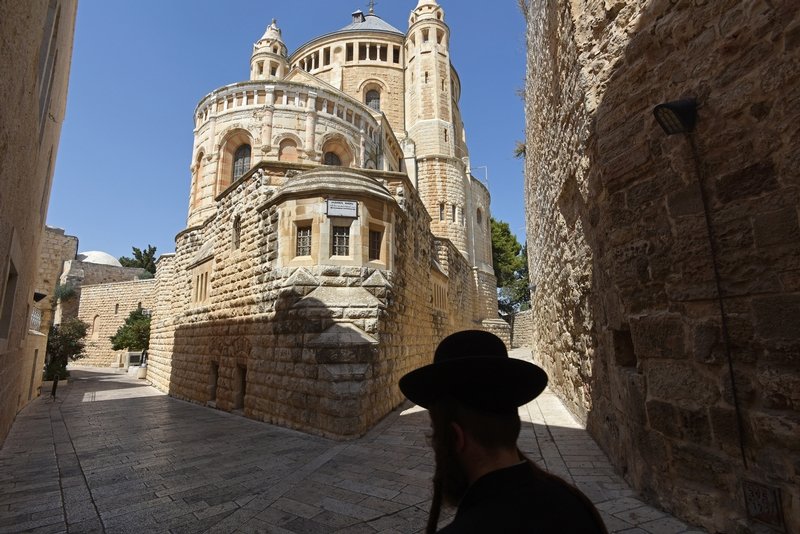 An Ultra-Orthodox Jew walks past the Dormition Abbey on Mt. Zion in Jerusalem July 27. Christian leaders want Israel to step up protection of Christian sites.
By Judith Sudilovsky
Catholic News Service
JERUSALEM (CNS) — Although Israeli officials have publicly criticized the June arson attack that seriously damaged the Benedictine Church of the Multiplication in Tabgha, anti-Christian violence is not new, said a representative of the religious order.
Benedictine Father Nikodemus Schnabel, spokesman for the Benedictine Dormition Abbey on Mount Zion,  told Catholic News Service that fires and vandalism have plagued other churches and church property for years.
The abbey was set on fire May 25, 2014, soon after Pope Francis visited the site during his Holy Land pilgrimage. It is located near a yeshiva and the Tomb of David, where the Cenacle, or the Upper Room, site of the Last Supper, is located.
A year earlier, two cars owned by the Benedictines were set on fire. Benedictine monks often are victims of verbal and spitting attacks, and Christian tombstones are smashed, Father Schnabel said. In March, a Greek Orthodox seminary was damaged in an arson attack and a wall was sprayed with anti-Christian graffiti.
Although there have been photos of people spitting at and verbally abusing the monks, no arrests in connection with any of the incidents have been made, Father Schnabel said. A Benedictine request that a security camera be installed near their property has gone unheeded, he added.
"We are very thankful for the many signs of solidarity from our friends in the civil society, but (until Tabgha) we never heard any officials respond," the Benedictine priest said.
With the official condemnations of the Tabgha attack, the Benedictines are "very happy with the words," but are "now looking for results," he said.
No charges have been brought in connection with the incident, although police announced July 11 that they had arrested several suspects.
The building housing the traditional locations of the Cenacle and the Tomb of David continues to be a point of contention within the National Religious Party, a Zionist political party whose supporters believe in the right of Israel over all areas of the biblical Jewish Holy Land. The party has used the building as a rallying point, charging at times that it will be transferred to the Vatican or Christians.
Makor Rishon, a newspaper identified with conservative national and religious values, regularly publishes anti-Christian articles and charges against Christians and the monastery in particular.
"It is a very tiny group of national religious Jews," said Father Schnabel, emphasizing that it was important to point out that the perpetrators are not, as often portrayed in the media, ultra-Orthodox Jews. Many are those who are prohibited from entering the West Bank by Israeli authorities, those known as "the hilltop youth" who establish illegal settlements on hilltops in the West Bank, he said.
The Benedictine said those who carry out the attacks adhere to an ultranationalist stance that often calls for ridding Israel of non-Jewish individuals and organizations.
Latin Patriarch Fouad Twal blamed government inaction and a lack of education about tolerance and understanding for the continuing attacks.
"Sometimes the government of Israel condemns (incidents) and many private Israeli institutions and Israelis come or write beautiful letters condemning the attacks, saying this is not their way," noted Patriarch Twal. "But it is not enough for the government to condemn the actions. We ask for follow-up with action."
He charged that the government of Prime Minister Benjamin Netanyahu tacitly encourages such behavior.
"They are in the government. All the right-wing government is their allies. This is their line," he said. "They are an integral part of the government. This is our society. We haven’t a normal life."
In a June 22 statement, the Christian Palestinian initiative Kairos Palestine expressed concern that such continued incidents could "fan dissent and fire religious conflicts in the Holy Land." It said that failing to hold the perpetrators accountable for their deeds encourages them to continue with such actions.
"The Israeli authorities are responsible for this kind of terrorism and the absence of security for the religious Christian and Muslim sites," Kairos Palestine said.
Under police order not to speak about the case so as not to interfere in the police investigation of the Tabgha attack, Father Schnabel said: "We feel that there is not the lack of ability to look for results and arrests but a serious lack of will. I hope I am wrong but we have that feeling."
As difficult as it may be, the priest said, it is necessary for Israel and its officials to acknowledge that a small fringe within society does not tolerate minorities; this is part of the religious freedom and democracy that Father Schnabel is convinced Israel supports.
Arresting the culprits helps with a feeling of justice being done, but it is only treating the symptom of the illness rather than the problem itself, he said.
"You have to go to the root of the problem," he said.
Copyright © 2023 Catholic News Service, Inc. All rights reserved. Linking is encouraged, but republishing or redistributing, including by framing or similar means, without the publisher's prior written permission is prohibited.