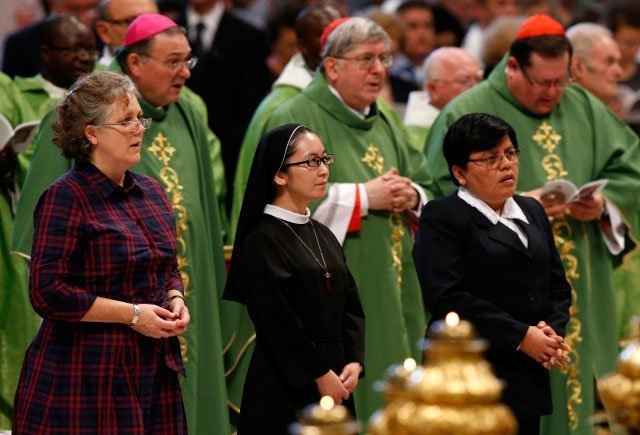 VATICAN CITY (CNS) — Women can be appointed heads of some offices of the Roman Curia, Pope Francis said, but that will not be enough to "recover the role" women should have in the Catholic Church.

"Women should be promoted," he said May 16 during an audience with an international group of men and women religious working in the Diocese of Rome. But assigning a certain number of women to leadership positions is "simply functionalism," he said.

What is important is to ensure that women have a voice and are listened to, he said, because the church needs their specific contributions.

"When we men are dealing with a problem, we arrive at a conclusion, but if we deal with the same problem along with women, the conclusion could be different. It could lead along the same path, but would be richer, stronger, more intuitive," he said. "Women in the church must have this role," because the church needs "the feminine genius."

During the pope’s long meeting with the religious, he responded off the cuff to questions posed by two women and two men. But he also highlighted the stories and ministries of religious he has met during his two years as bishop of Rome and experiences he had previously as archbishop of Buenos Aires.

Pope Francis responded that for both women and men religious finding a good spiritual director can be a problem either because a priest "does not understand what consecrated life is, or because he wants to involve himself in the charism and give it his own interpretation."

Looking for a good confessor also can be difficult, he said. When going to confession, a religious doesn’t need "a nice chat between friends," but he or she also does not need "one of those rigid ones."

"In the other diocese I had," he said, referring to Buenos Aires, "I always asked the sisters who came to me asking advice, ‘But tell me, in your community or congregation isn’t there a wise sister, a sister who lives your charism well, a good sister with experience? Ask her to be your spiritual director.’"

The pope said he once was told, "But she’s a woman!"

Spiritual direction, the pope said, "is not a charism exclusive to priests. It’s a charism of the laity."

The pope said he was reading a book on obedience by St. Silouan of Mount Athos, who was a carpenter. "He wasn’t even a deacon, but he was a great spiritual director."

Pope Francis encouraged religious superiors — of both men and women — to identify members of their congregation who are good and wise and patient, and get them training in spiritual direction.

"It’s not easy," the pope said. "A spiritual director is one thing and a confessor is another. I go to a confessor, say what my sins are, feel condemned, then he forgives everything and I go forward.

"But with a spiritual director, I have to talk about what is in my heart. The examination of conscience isn’t the same for confession and for spiritual direction," he said. "For confession, I have to look at where I was lacking, where I lost patience, if I was greedy — that kind of thing, those concrete things that are sinful.

"But in spiritual direction, I must examine what is happening in my heart, where the Spirit is moving, if I felt desolation or consolation, if I am tired, why I am sad: These are things to talk about with the man or woman who is my spiritual director," he said.

"When you find a consecrated man or woman who cannot discern what is happening in his or her heart, who cannot discern a decision, it’s a failing of spiritual direction," the pope said. "This is something only a wise man or wise woman can do."

Iwona Langa, a consecrated virgin, asked the pope how married couples and consecrated people can help each other realize they both have a vocation to love and they can support one another in their fidelity to that love.

The key, the pope said, is to remember that love is concrete.

"Your love as a woman is a concrete, maternal love," he said. The 25th chapter of Matthew’s Gospel outlines just how concrete Christian love is to be: among other things, it involves feeding the hungry, clothing the naked, visiting prisoners.

Scalabrinian Father Gaetano Saracino, pastor of a parish Pope Francis visited in March, asked how religious orders, new movements, Catholic associations and the diocese could work together better, valuing the identity and gifts of each.

Saying he would be blunt because "I am a bishop and a religious," the Jesuit Pope Francis told the religious, "One of the most difficult things for a bishop is to create harmony in the diocese."

Sometimes, the pope said, it may be true that the bishop sees religious as "stopgaps" or fillers. "But put yourself in the bishop’s place. You have a parish with a great religious as pastor; three years later the provincial comes and says, ‘I’m changing this one and sending you another.’ The bishops suffer from this kind of attitude."

Religious tell the bishop, "we had a chapter and the chapter decided," he said. Well, the bishop is trying to run a diocese and sometimes it seems that "many religious women and men pass their lives if not in chapters, then in verses," he said, making a play on words while also making fun of endless meetings.