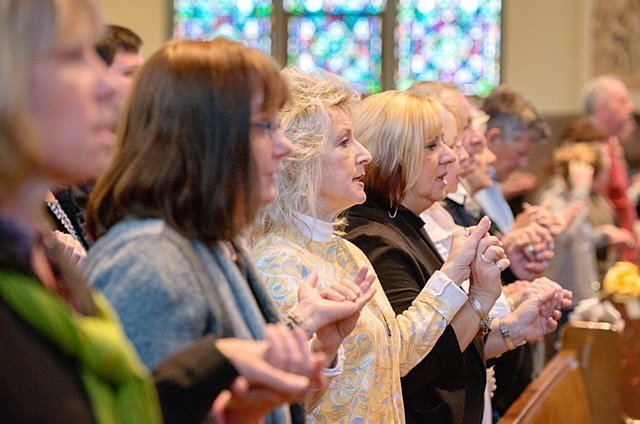 Patricia Carroll prays the Lord’s Prayer alongside family members during the 100th-anniversary Mass for Rochester’s St. John the Evangelist Church, which is now part of Peace of Christ Parish.

ROCHESTER — As a way to commemorate the 100th anniversary of St. John the Evangelist Church on Humboldt Street on Oct. 5, parishioners decorated the area around the altar with objects significant to the history of the parish: pictures of buildings and a school graduating class, a food basket representing the church’s care for the needy, and pictures of notable priests and women religious in the parish’s history.

The shovel’s significance, church historian Liz Webster later explained, was that founding pastor Father John B. Sullivan (who was later named a monsignor) insisted that parishioners hand dig the foundation for the combined church and school, so that parishioners knew that the building was their church.

In reflecting on that labor of love, Mercy Sister Marlene Vigna reminded parishioners that they were chosen to tend God’s garden, even though the job is not always easy.

"The fruitfulness of a real harvest is a reward for your hard work," said Father Robert J. Schrader, pastor of Peace of Christ Parish, which was formed in 2007 and comprises St. John the Evangelist and two other worship sites.

St. John the Evangelist originally branched off, so to speak, as a new parish in 1914 from parts of Corpus Christi, Blessed Sacrament, Our Lady of Victory and St. Joseph parishes. It was originally located among farms in Brighton, but following rapid growth of Rochester, the city annexed the land in 1922.

To mark the start of construction for the new church in 1914, Msgr. Sullivan led a parade down Winton Road from East Avenue to Humboldt Street that featured the 54th Regiment Band playing a John Phillips Sousa march.

"Bishop (Thomas F.) Hickey came to the groundbreaking in a car, and that was a big thing," Webster said. "That was a huge deal."

The school opened in 1916 with four classrooms run by the Sisters of Mercy and a graduating class of eight. Following rapid growth, the present church was built in 1926 and featured large and elaborate stained-glass windows created by Rochester’s Pike Stained Glass. A rectory and convent and a newer school were later built.

Msgr. Sullivan’s great-nephew, Bob Crego, said his great-uncle loved the parish that he served for 45 years from 1914-59.

"He always considered that he was a servant to his parish," Crego said. "He always felt that he owed them more than they owed him."

Crego recalled that the altar servers cleaned the church on Saturdays. After they were done, Msgr. Sullivan would use a white handkerchief to make sure that they had cleaned off all the dust.

"He wanted the best for his parishioners," Crego said. "He wanted a clean church."

Following the anniversary Mass, volunteers handed out lollipops to the children in attendance to remember Msgr. Sullivan, who weekly gave out such treats to the schoolchildren.

In 2007 Winton-Culver Catholic Community formally merged to form Peace of Christ Parish, which has maintained all three of its worship sites at St. John the Evangelist, St. Ambrose and St. James. Parishioner Vern Connors of Rochester said the three worship sites are working to reach out to young families to help sustain the parish’s vibrancy in the future.

"It’s a nice, lively parish," he said. "People are very energized and involved in a lot of things beyond coming to Mass. There are a lot of social ministries and a lot of opportunities to practice the faith."