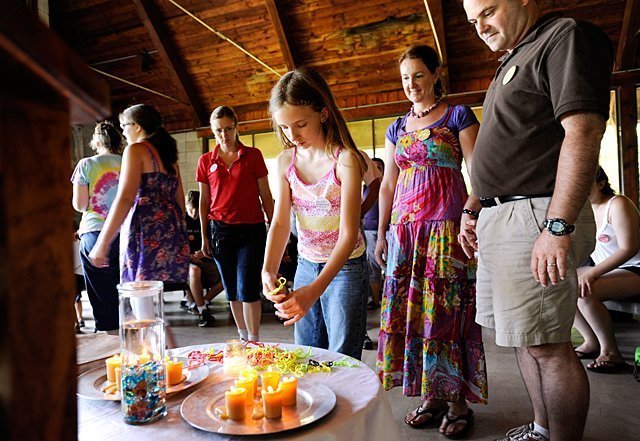 Family life has been the focus of renewed attention and discussion in Catholic circles since Pope Francis began his pontificate in 2013. He convened synods of bishops in 2014 and 2015 to encourage discussion of topics related to families, and just two months ago the pontiff released his post-synodal reflection on the family, Amoris Laetitia ("The Joy of Love: On Love in the Family"). His first trip to the United States at the conclusion of last fall’s World Meeting of Families in Philadelphia garnered much media attention.

Yet the family held an important place in the life of the Catholic Church long before Pope Francis started making headlines, according to Deacon John Brasley, diocesan director of deacon personnel and formation.

"That idea of family as domestic church was talked about at the Second Vatican Council, but it had been around for centuries before that," Deacon Brasley said, noting that when people talk about the size of a particular parish, they talk about how many families are in that parish. "The church is made up of dioceses, and dioceses are made up of churches and churches are made up of families. It’s the way we look at the church."

Deacon Brasley and his wife, Belinda, are former coordinators for Worldwide Marriage Encounter and the current directors of Catholic Family Camp at Camp Koinonia in Italy Valley near Naples. Worldwide Marriage Encounter and Family Camp are two of many programs that are intended to accompany and strengthen couples and families in their journeys through life.

Deacon Brasley noted that couples participating in Marriage Encounter weekends frequently refer to the family as the "domestic church" or "little church."

"We say that the family has the marks of the universal church, which are one, holy, catholic and apostolic," he said.

The "one" referred to means that there is a sense of unity among the family’s members, especially the husband and wife, he said. When people think of the second mark, holiness, they often think of the Holy Family — Jesus, Mary and Joseph — but all families actually are called to be holy, Deacon Brasley said, noting that families can be holy by praying together, spending time together and forgiving each other. The third mark is catholic, which means universal.

"It’s important in a family to be open to everyone, to be hospitable, to welcome the stranger," Deacon Brasley explained.

Families also are called to be apostolic, or to imitate the apostles by helping to spread the good news and bring about the kingdom of God, he added.

Large-scale events like the recent synods of bishops and such smaller initiatives as Family Camp both reflect recognition that the church is only as strong as the families it comprises, Deacon Brasley said.

"At Family Camp we try to strengthen (families’) bonds, to help families be one, holy, catholic and apostolic, to be the best little churches they can be, and to be a support for them. And the families support each other," Deacon Brasley said.

Mutual support also is a component of the Parents With Young Children Network based at Blessed Sacrament, St. Mary and St. Boniface parishes in Rochester. Through the network, the three city parishes offer opportunities for families with children under 4 to connect with others in similar situations, according to Sue Howard, pastoral associate. Each year Howard and other leaders in the network plan at least four family activities, such as picnics, potluck dinners, pancake breakfasts and trips to toddler-friendly environments.

Parents of young children often are eager to get to know other families who also are trying to bring up their children in faith-filled homes, Howard said. They find strength in knowing there are others out there sharing similar struggles and trying to find a balance between work, school and family life.

"Parents often struggle with the prospect of trying to maintain their Catholicity in the secular world, both at home and at work," she said. "I’ve found that just to have another family to wave to across the pews acknowledges the strength of community that keeps families connected with the church, because church is a community."

A number of other parishes throughout the diocese also boast initiatives designed to help parents raise their children in the Catholic faith. St. Peter Parish in Ontario County, for example, encourages parents to bring their very young children to church by providing bags of faith-related activities, toys and snacks to occupy those children during Mass. A number of agencies and institutions in the Diocese of Rochester also offer programs and resources intended to support families. Building and strengthening families is at the heart of Catholic Family Center’s mission, for example, and the Rochester agency provides comprehensive services for many families in the region. The agency offers such services as adoption services, home-based counseling for families with at-risk children, and support for nonparent caregivers who are raising children.