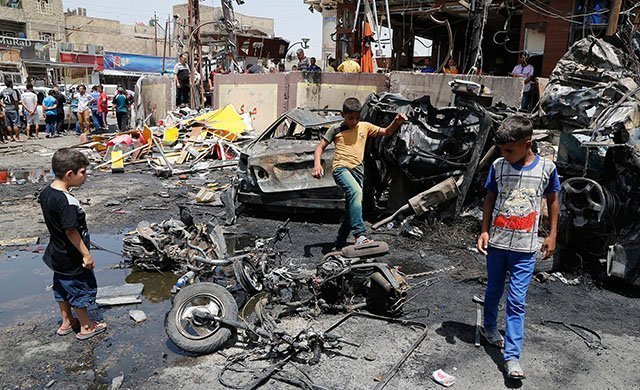 Boys look at the site of a car bomb attack in Baghdad, Iraq, Aug. 1. One Anglican official said more than 1,500 people were killed in Iraq in late July in violence perpetrated by the Islamic State extremists.

VATICAN CITY (CNS) — Pope Francis has echoed a century of papal pleas: "No more war!" But, referring to the outrageous violations of human rights taking place in northeastern Iraq, he also begged, "Stop these crimes!"

The Catholic Church for millennia has taught that war must be a last resort to resolve problems. But it continues to recognize the right of people to defend themselves and, particularly since the pontificate of St. John Paul II, the church has taught that the international community has an obligation to intervene — with force, if necessary — to defend the lives of innocent people at risk of genocide.

"When all other means have been exhausted, to save human beings the international community must act. This can include disarming the aggressor," said Archbishop Silvano Tomasi, the Vatican representative to U.N. agencies in Geneva.

The duty to defend the innocent explains how Pope Francis can appeal for peace and, at the same time, his representative in Baghdad can welcome President Barack Obama’s decision to begin using military force against Islamic State positions in northeastern Iraq in early August.

Asked about the U.S. military airstrikes, Archbishop Giorgio Lingua, the Vatican nuncio to Iraq, told Vatican Radio Aug. 11, "This is something that had to be done, otherwise (the Islamic State) could not be stopped."

The Islamic State, defined as a terrorist group by the international community and by the Pontifical Council for Interreligious Dialogue, has captured a wide swath of territory in Iraq and Syria, torturing and massacring civilians and forcing hundreds of thousands of people — particularly Christians, Yezidi and other minorities — from their homes.

Given the brutality of the terrorists, Archbishop Lingua’s comments were in line with papal statements and Catholic social teaching.

Archbishop Tomasi told Catholic News Service Aug. 12, "From the teaching of Pope John Paul II we have a clear orientation and precise guidelines" for what is generally termed "humanitarian intervention."

Armed intervention "must not be unilateral, but internationally recognized. All other means — dialogue, negotiations — for protecting the innocent must be exhausted; and real assistance for those whose rights are being trampled must be provided," he said in a telephone interview.

The Compendium of the Social Doctrine of the Church states: "The international community as a whole has the moral obligation to intervene on behalf of those groups whose very survival is threatened or whose basic human rights are seriously violated. As members of an international community, states cannot remain indifferent; on the contrary, if all other available means should prove ineffective, it is legitimate and even obligatory to take concrete measures to disarm the aggressor."

St. John Paul gave one of his clearest explanations of the problems of modern warfare and the ethically acceptable limits of humanitarian intervention in his message for World Peace Day 2000.

"Crimes against humanity cannot be considered an internal affair of a nation," he wrote. "When a civilian population risks being overcome by the attacks of an unjust aggressor and political efforts and nonviolent defense prove to be of no avail, it is legitimate and even obligatory to take concrete measures to disarm the aggressor. These measures, however, must be limited in time and precise in their aims."

As war raged in Bosnia-Herzegovina in the early 1990s and "ethnic cleansing" became a household word, Pope John Paul told diplomats accredited to the Vatican that the "principles of state sovereignty and non-interference in their internal affairs, which continue to have value, nevertheless cannot be a shield behind which torture and assassins can hide."

Speaking specifically about northeastern Iraq today, Archbishop Tomasi said, "the point of departure for any reflection on the current situation should be the victims. We must help those who are being killed, whose homes are being destroyed, who are forced to flee."

"The problem is not the problem of the church or the Christian community but of the human family," he said. "Common responsibility should be exercised to protect human beings who have no one else to protect them.

"This is not a religious issue, it is not a matter of Christians defending Christians, but it is a call for the defense of human beings by all human beings," the archbishop said.

Archbishop Tomasi recalled the 1994 genocide in Rwanda and the fact that the massacre of Tutsis by the majority Hutus was on the front page of newspapers and was a topic of repeated discussions regionally and internationally, but international action was extremely limited.

"People met, but did nothing," the archbishop said, "and we have mourned the Rwandan genocide ever since."