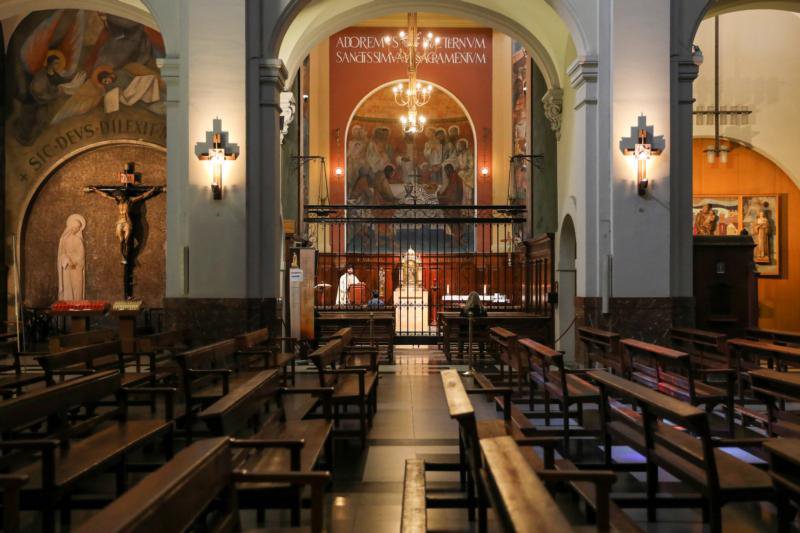 A priest celebrates Mass inside a chapel of a nearly empty church amid the coronavirus pandemic March 25, 2020, in Barcelona, Spain. (CNS photo by Nacho Doce/Reuters)

ROME (CNS) — In addition to expanding shelters for the homeless during Italy’s COVID-19 lockdown, Catholic dioceses and parishes are offering rooms to medical personnel exhausted by long hours at work or who will not go home to avoid the danger of spreading the virus to their loved ones.

The Italian bishops’ conference is posting, and updating daily, a list of actions and activities carried out by diocesan Caritas organizations.

The Diocese of Crema, in Italy’s devastated Lombardy region, said March 28 it was preparing to host “35 Chinese doctors who will come to assist at the Crema hospital and a field hospital that will be built over the next five or six days” on the grounds of a former convent now owned by the diocese.

The diocese also has offered “25 places for health workers who cannot return to their families after work so as to not place their relatives at risk.”

The Diocese of Bergamo, also in Lombardy, has set aside 50 single rooms with bathrooms in the diocesan seminary for doctors and nurses coming to help from outside the region.

In fact, the bishops’ conference said, Crema and Bergamo are just two of the 23 dioceses that have informed the national civil protection service that they can provide accommodation for up to 500 medical personnel.

Another 18 dioceses have made more than 300 beds in 25 seminaries, convents, retreat houses or clinics available to the government for people who are in quarantine or recently released from the hospital, it said. And 21 dioceses, the statement said, have expanded the number of beds they offer to the homeless as well as expanding their normal operating hours to 24 hours a day, given that people are not supposed to go outside.

Across Europe, Catholic dioceses and religious orders are offering to turn church facilities into spaces needed for health care or housing during the COVID-19 pandemic.

The German Catholic news agency KNA reported the Archdiocese of Cologne is treating coronavirus patients flown in from Italy and has opened its seminary to provide food and showers for homeless people.

Catholic clinics in the archdiocese were providing urgently needed intensive care beds for six patients from Italy, Cologne Archbishop Rainer Maria Woelki said. The archdiocese has 43 catholic hospitals with a total of 12,000 beds.

“It is an act of charity to provide fast and unbureaucratic help,” he said. The state government of North Rhine-Westphalia arranged the transfer from northern Italy where hospitals are stretched beyond their limits in the crisis.

Archbishop Woelki also said starting March 30, homeless would be able to get a hot meal and take a shower at the seminary. He made the announcement in a service that was held in Cologne cathedral without a congregation and streamed online. He pointed out that the homeless were especially hard hit by the corona pandemic, KNA reported.

In Ukraine, Father Lubomyr Javorski, finance officer of the Ukrainian Catholic Church, acknowledged the pastoral role of chaplains, but said, “The church also has many property resources which can be used during the pandemic. These facilities can be converted into hospitals, but also made available to physicians far from their workplaces, and to people returning from abroad with nowhere to spend their quarantine.”

Bishop Mario Iceta Gavicagogeascoa of Bilbao, Spain, said he, like other bishops, had been forced to close local churches, but was now preparing some for pandemic victims.

“The conversion of a religious congregation building here is already underway, and the authorities are studying how to prepare other diocesan properties,” he said.

Bishop Iceta told Religion-Digital Catholic he was ready to resume his previous career as a doctor, if Pope Francis consented.

“The church, as Pope Francis says, is a field hospital — isn’t this a favorable occasion to deploy the services of this hospital?” said the 55-year-old bishop, who trained as a surgeon before his ordination and sits on Bilbao’s Academy of Medical Sciences.

“I haven’t practiced medicine for a long time and would need to catch up on current advances. But if it were necessary and there was no better solution, there’s no doubt in my mind that I would offer to resume.”

In Italy, TV channels showed San Giuseppe Church at Seriate being used as a depository for coffins, which were later gathered by military trucks for cremation as local authorities struggled with the scale of deaths.

In Germany, one southern diocese said it had opened a telephone hotline for needs ranging from shopping to child care, while Benedictine nuns in Bavaria said March 26 they were manufacturing 100 reusable respiratory masks daily for local hospitals.

In Portugal, dioceses offered seminary rooms and other facilities to health professionals and civil protection teams.

The Catholic Ecclesia news agency reported March 26 Portugal’s Guarda Diocese had turned over its apostolic center for “emergency care,” while the Jesuit order’s Oficina technical college in Lisbon said it was producing visors with 3-D technology for local medical centers.

“The manufacture of visors immediately aroused interest from other sectors, such as firefighters, municipality officials and security forces,” the school’s director, Miguel Sa Carneiro, told Ecclesia. “Former students whose companies have this equipment are making it available, and we’re creating a network of partnerships to will allow increased production.”